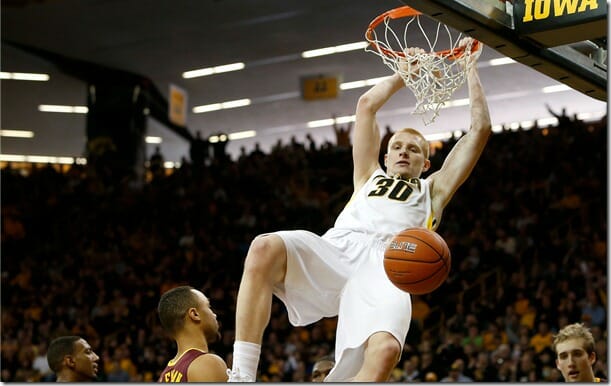 The efficiency numbers tell us that Indiana is the league’s best team by a fairly comfortable margin. (See the full efficiency margin table here.) The Hoosiers have the best offense in the Big Ten and their defense isn’t far behind, second best in the league to be precise. The Spartans have been extremely consistent on both ends – ranking third in offensive and defensive efficiency – and still have the opportunity to host the Hoosiers this week in a game that should shape the title race down the stretch.

As for Michigan and Wisconsin, the teams tied two games behind the league leaders, the story is similar but opposite. Both the Wolverines and Badgers have an ugly other half to go along with a dominant strength. For Michigan that means a great offense mixed with a porous defense. For Wisconsin, that’s a dominant, Big Ten best, defense with just the eighth best offense in the Big Ten. The good news for Badger and Wolverine fans is that both teams have played front loaded schedules and should have the ability to finish on a high note.

In the middle, Minnesota and Ohio State continue to regress toward the pack while Iowa and Illinois are trending upward. Just how strong is the Big Ten? These four teams all rank in Ken Pomeroy’s top 30 nationally and are likely to be playing on the first day of the Big Ten Tournament in a couple of weeks as the league’s 5th-8th best teams.

Iowa beating Minnesota shouldn’t be a great surprise. The Gophers are now just 1-5 in Big Ten road games and seem to be caught in a perpetual two steps forward, one step back motion. After an emotional mid-week win overtime win against Wisconsin and a quick start which saw Tubby Smith’s team jump out to a 16 point first half lead in Iowa City, things seemed to be comfortable for Gopher fans. Then Iowa went to a zone defense and the Hawkeyes seized control of the game. Iowa had a five point lead by halftime and cruised to a 21 point victory. Iowa led by 23 at one point, meaning the game saw a radical 37 point swing. Now Iowa looks like a team that could make a final push for an NCAA tournament bid while the Gophers only hope to hold on. The Hawkeyes play three of their final five games at home and beyond a trip to Indiana the schedule is manageable. At 6-7 with a weak resume, Iowa might need to win four of its last five including a home game against Illinois to add a coveted top 50 victory.

This was the first time Michigan and Michigan State had faced off as top ten teams at the Spartans simply blew the Wolverines out of the water. Michigan State dominated Michigan from the opening tip off and the final score didn’t even do this game justice. The Wolverines had no answers for the Spartans whether it was trying to stop Derrick Nix (14 points on 6-of-9 shooting) on the block or Gary Harris from three point range (5-9 3pt). Michigan State’s lead ballooned to 31 points in the second half and the Wolverines were simply embarrassed. Michigan will have a shot at revenge in two weeks in Ann Arbor but after watching the Spartans dispatch the Wolverines so easily it’s clear that it will take a massive turnaround to shift their fortunes..

I really didn’t want to give this honor to Trey Burke because of Michigan’s disheartening performance in East Lansing but over two games last week Burke averaged 23.5 points on 70 eFG% shooting, 4.5 assists to one turnover. It’s difficult to play better offensive basketball than Michigan’s floor general. Michigan’s three losses in four games might have taken a hit on Burke’s Player of the Year stock, but the sophomore continues to put up gaudy numbers with ruthless efficiency. When Burke is hitting his threes (6-of-9 last week) he becomes almost impossible to stop with his quickness and passing ability.

Michigan State continues to be without the services of sophomore point guard Travis Trice (concussion) but Denzel Valentine has stepped up. The Spartans are relying on Valentine, a 6-foot-5 true freshman, to back up essentially the entire backcourt. Valentine has more than answered the bell. Against Michigan the playmaker had seven points, four assists, a block and a steal. He turned the ball over three times but that’s a problem Tom Izzo can live with when Valentine makes so many positive plays. He continued his improved play at Nebraska, tallying seven points, seven rebounds and two assists in 24 minutes of action. Trice’s injury status remains up in the air and Valentine could be necessary from a Spartan team with significantly less depth than Tom Izzo is accustomed to.

The winner of this game controls its own destiny in the Big Ten Championship race. Both teams have challenges remaining – Indiana still travels to Minnesota and Michigan and hosts Ohio State, while Michigan State travels to Ohio State and Michigan and hosts Wisconsin – but this game should shape the final three weeks of Big Ten play. Indiana won the first meeting thanks to a monster showing from Victor Oladipo and a number of Michigan State turnovers but the Spartans are playing as well as anyone in the country of late and judging by recent form you could argue that at this instant, these two teams are playing better basketball than anyone in the country.