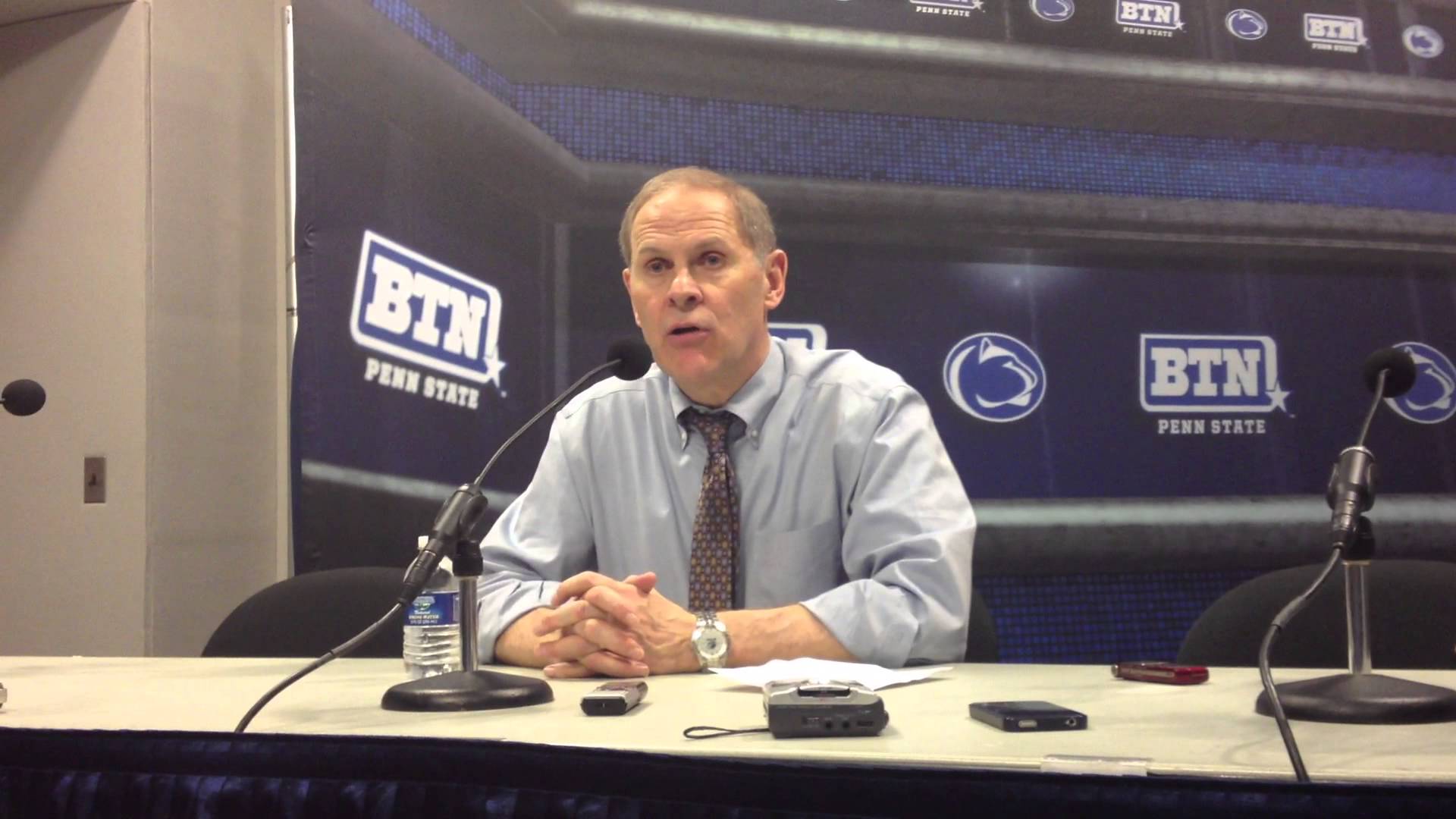 John Beilein faced the media after his No. 4 ranked Michigan team lost at Penn State on Wednesday afternoon. Watch Beilein’s press conference in the embedded media player below or find the transcript after the jump.


I think you saw today why we all love college basketball. I’ve been seeing this coming with Pat Chambers’ team for the last month. We’ve watched a lot of video and they’re just really getting used to playing well together. They make every extra pass. Took four or five charges on us today, I don’t know if we had a charge. I think we might have had one. They’re playing great team basketball and they beat us fair and square and the last 10 minutes really outplayed us. So he had a great plan, he really had a great plan on Trey Burke and their guys hit shots that they can hit. [Jermaine] Marshall was terrific and they hit just another one, made their foul shots, we did not. And you just don’t win, I don’t care where it is, you just don’t win, or what the team’s record is, when you play like we did in those last 10 minutes.

A: Well, I think Tim [Hardaway Jr.] got in a little bit of foul trouble, but they did a great job, they really tried to shut down Trey [Burke]. We had some good shots, not enough good ones. They slowed us up with their press a little bit. We couldn’t stop them. And I think we were scoring a lot in our transition offense,  that was huge. But you can’t run that transition offense if you can’t make a stop. Whether they hit the three, or they drove it right to the basket, you know, they were getting easy shots.

Q: John on the defensive side, you had preached all week about how you wanted to get stops and get back-to-back stops. What went wrong in the second half when they were able to convert shots?

A: Well, you gotta guard your guard. You can’t let your guy go north or south. Marshall went north, south. You gotta hedge the ball screen really well. They beat us over and over again or drew fouls on it. And then we have to see action and react to it a little bit better but we gotta get better at it, that’s all it is. We gotta get better at it.

Q: Trey said, last six minutes, last seven minutes, whatever it is was, they just had more heart?

A: They were a better team. We did not withstand the run. We did not show the things you need to do to be a really good team. To win games at this level, you have to have an awful lot of courage down the stretch and we looked very tentative. And we can just play better defense than we did. We just did not play at the level of defense we did before. And that gets you. But I said, they’ve been playing at a pretty high level for a little bit, just falling short. Happy for Pat, happy for Penn State. For this win, it couldn’t happen to a nicer guy who’s really working hard. And those kids represent the university so well. There’s no trash-talking, there’s nothing. They’re just buying in to playing good team defense and hitting the extra man.

Q: Is there an intensity problem? There’s been a couple of games where the players have talked about there’s a lack of intensity.

A: Well I think that with some of our guys, it’s still moving too fast for them. And so they’re a step slow from where they should be. You got to make a stand and you got to stay in front of your man better, and if somebody gets beat, there’s got to be some help there that’s solid. We didn’t do either one of those things well, and you’re going to get beat, I mean Marshall is a really talented player, Newbill is a very good player, he played point all year. He’s in this position and he’s getting better and better at it. They got some guys that have been out there and played some minutes and they really took advantage of some situations where we did not play with that type of fortitude that we need.

Q: John, you talked about bouncing back and really trying to build them emotionally to withstand these last four games. How difficult is it going to be?

A: It’s going to be really difficult, especially with the way it was. We were up 15 with 10 to go and they just make three after three after three, and we missed some easy shots, we turned the ball over. Turnovers and foul shooting were really big, I mean I think it led to 15 points for them in the first half, so they were one of the lower ones in the league at turning people over. We gave the ball to them or we were very tentative with it and we charged a lot. I think we might have had four of them and that’s a turnover. So we’re disappointed, we got to move on. It’s that simple. We got to get better. If you’re going to win championships, you got to win games like this, when you’re on the road, up by 15 points with 10 to go. We didn’t have what it takes tonight and it’s that simple.

Q: How deflating, then John, is it? This morning you guys controlled your own destiny. This was one maybe that I don’t think you had it is a win before you came in obviously, but it’s gone now, you’ve lost it. How deflating is it?

A: If you’re going to be a champion in this league, you really have to be able to complete games, you got to be able to beat teams on the road, especially if they’re in the lower end of the division. That’s the key to it. You’ve got to be 5-4 on the road. We cannot be 5-4 on the road now. And that’s key. This was one of those games that we had to have and we didn’t get it. Will we be deflated? Yeah, we will be. But it’s our job as a coaching staff on Friday and Saturday to get back. And we’ve got another game Sunday at 4 that we gotta get ready for.

Q: What did you think of the officiating down the stretch? A lot of free throws, you guys looked like you wanted some more calls. What was your thought on that?

A: Yeah, I’m not going to comment on the officiating.