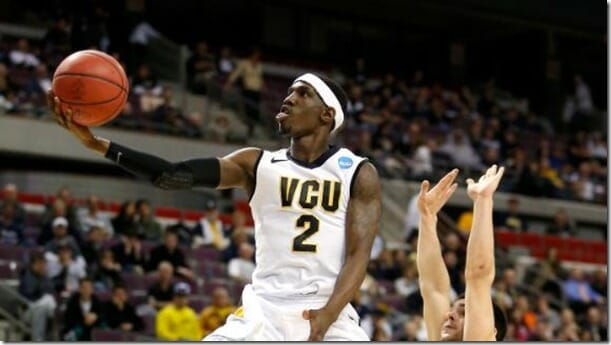 John Beilein has developed his coaching brand steadily over his 35 year coaching career. He’s tweaked and tinkered with his patented two guard offense but for the most part his teams follow a similar blueprint: a spread offense that loves the three point shot and values the basketball.

Shaka Smart has only been alive for 35 years, he’s forged his brand in just four seasons as a head coach. Havoc.

In his second season as a head coach, Smart took VCU to the Final Four despite opening the tournament in the play-in game. Last year he took the Rams back to the tournament, upsetting Wichita State in the round of 64 before a narrow loss to Indiana.

VCU moved to the Atlantic 10 this season but Smart’s program continues to trend upward. The Rams finished second in their more difficult conference and are forcing more turnovers than any team in the last six seasons. Rather than playing underdog double digit seed role, Smart’s team is now a favorite. The Rams are a No. 5 seed and dismantled a depleted Akron squad by 46 points on Thursday evening.

All of the pregame talk will surround VCU’s full court pressing defense but the Rams are actually a better offensive than defensive team. The Rams are ranked 13th in Ken Pomeroy’s adjusted offensive efficiency and were best offense in the Atlantic 10, scoring 1.13 points per conference possession. VCU has good balance offensively and is ranked in the top-65 nationally, and top-4 in the Atlantic 10, in effective field goal percentage, turnover percentage and offensive rebounding percentage. The Rams only offensive weakness is their inability to get to the free throw line. Conventional wisdom would be that the Rams excel in transition, given their aggressive full court defense. However, VCU’s half-court offense actually ranks higher compared to its peers. Synergy Sports rates the Rams’ transition offense in the 78th percentile at 1.11 points per trip and their half-court offense in the 87th percentile at .91 points per trip.

Defensively, VCU’s success boils down to the turnover. The Rams rank 1st in forced turnover percentage but 214th in eFG% defense, 289th in defensive rebounding and 282nd in free throw rate allowed. Breaking the press is easier said than done but there are endless offensive opportunities available for teams that can accomplish that feat. Officiating is also likely to play a critical role in Saturday’s game. The amount of ball pressure that the VCU – “heating up the ball” in the words of Shaka Smart – applies is significant and there’s a reason that the Rams rank 282nd nationally in free throw rate allowed.

Luke Winn did an excellent job profiling Shaka Smart’s full court press; both in terms of philosophy and the X’s and O’s. The Rams will utilize a number of different pressing looks that stem from both a 1-2-1-1 “diamond” zone press and its go-to trapping man-to-man press. VCU will undoubtedly try to force the ball out of Trey Burke’s hands but the key for the Wolverines might be in attacking the Ram defense after it manages to break its press.

Trey Burke is going to have nightmares of black and gold jerseys emblazoned with the numbers 2, 10 and 12. Briante Weber (above), Darius Theus and Rob Brandenberg. Smart refers to the group as wild dogs; to the rest of the world they are some of the best pickpockets in the country. Weber leads the country in steal percentage, Theus isn’t far behind at No. 6 while Brandenberg is also nationally ranked at 232nd. Weber, Theus and Brandenberg aren’t the most efficient offensive players (although they are  certainly competent) but Michigan’s ability to deal with their pressure could determine Saturday’s outcome.

Treveon Graham leads the Rams in scoring at 15.2 points per game. The 6-foot-5 sophomore is a prototypical wing guard at the college level. He’s a competent long range shooter – 36% – but is also able to put the ball on the floor and attack the bucket. He takes a fair amount of 2-point jumpers, but he still hits 50% of his twos, gets to the free throw line and is an effective offensive rebounder. The catch is that at 6-foot-5, Graham is the second biggest VCU starter. Although he sounds like the natural matchup for Tim Hardaway Jr., he’s likely to be Glenn Robinson III’s assignment.

Juvonte Reddic is the primary threat over 6-foot-5 in the Rams’ rotation. Reddic is big and strong but still quick at 6-foot-9 and 235 pounds. He excels on both backboards, finishing at the rim (57% 2-point) and getting to the free throw line. He’s also very active defensively, ranking nationally in block and steal percentage, and is also a critical part of the Ram full court press. Roughly 31% of Reddic’s offensive possessions are post-up plays and he’s comfortable facing up or playing with his back to the basket. The bulk of his remaining offensive productions stems from putbacks, cuts to the rim and transition opportunities.

Troy Daniels is Shaka Smart’s resident three point shooter. An astounding 87% of the 6-foot-4 senior’s field goal attempts originate from long range and he connects at a 40% rate. He accounts for 38% of VCU’s long range attempts and 43% of its makes. Daniels has great range and doesn’t need a lot of space to get open.

Turnovers are obviously going to play a massive part of this game. Michigan probably can’t survive VCU’s full court press with just Trey Burke. Tim Hardaway Jr., Nik Stauskas and even Glenn Robinson III are going to need to be strong with the ball and make good decisions. VCU is 2-7 when opponents turn the ball over on less than 23 percent of their possessions and 25-1 when it does manage to force that many turnovers (or more). Michigan has only turned the ball over on more than 23 percent of its possessions once this season; at Michigan State.

Breaking the press and valuing the basketball will be critical but Michigan’s greater concern might be stopping VCU. The Rams have a big man to test the Wolverine front line down low, a multitude of guys that can put the ball on the floor and get into the lane, and a three point shooter to punish Michigan for defensive breakdowns and over helping. The inability to get stops merely throws fuel on the fire as made baskets provide a perfect opportunity for the Rams to set their press and deny Trey Burke the ball.

Other than an early season game against Arkansas, where the Razorbacks were never able to muster much ball pressure, Michigan hasn’t faced a team even close to VCU. There will be mistakes, turnovers and trepidation; the Rams are too good not to cause at least some disruption. The true test will be how Michigan reacts after getting hit in the mouth. Havoc works because it forces mistakes to compound into more mistakes. Defensive breakdowns lead to turnovers which lead to more baskets and pressing situations. It will be critical for Michigan to prevent quick 4-0 runs from extending to 10, 12 or 14 point spurts that can determine a game. John Beilein will have to help his team balance the fine line of playing smart and disciplined yet still attacking the full court press to capitalize on easy opportunities.

Ken Pomeroy currently ranks Michigan 12th and VCU 14th in his ratings and projects a narrow 73-72 Michigan victory on Saturday afternoon. Michigan has the talent to top VCU but preparing for an extreme style of basketball like VCU’s is an unenviable task for John Beilein and his staff.