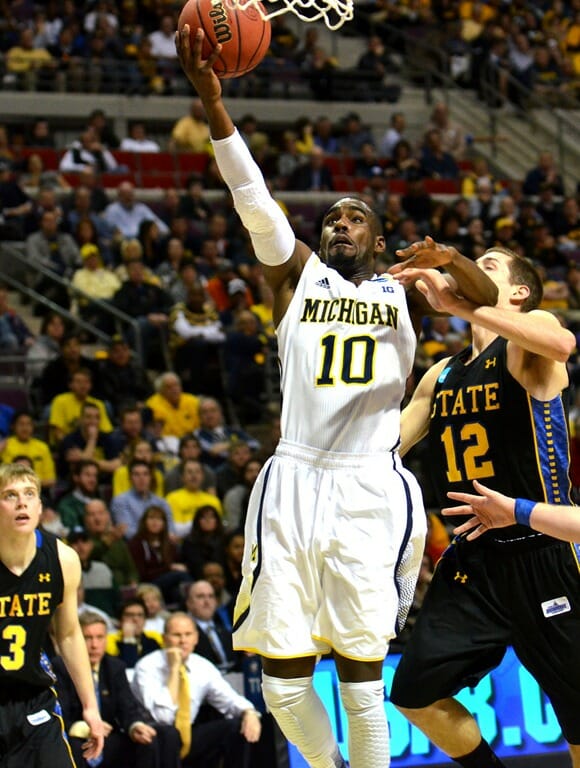 It sounds funny to hear players from Kansas, a team that averages three possessions more per game than Michigan, say they’ll be looking to slow the game down against the Wolverines on Friday.

But the Jayhawks have read their scouting reports and recognize that slowing Michigan’s transition offense will be critical for a Kansas victory.

“They’re a very fast team,” Young said. “They’re all very good in the open court. Just being able to control the pace is big.”

What Kansas is referencing is not so much Michigan’s overall pace, which is below Division I average, but its efficiency when it gets into the open court. The Wolverines might not run as often as others but when they do, the result is generally easy points: dunks, layups or open threes.

Michigan will naturally be looking to get out and run, but it will take some doing. It will mean stopping Kansas’s offense, which relies mostly on two-pointers and getting to the free-throw line — over 76 percent of the Jayhawks’ scoring this season has come from twos and free throws. Unlike a team that runs all the time like Indiana, Michigan’s fast-break attack has been proven to be effectively nullified if the Wolverines can’t force misses and can’t get defensive rebounds.

While stopping the Michigan fast break will be key for Kansas, the players know who the true priority is: Trey Burke. Tharpe, for one, is excited for the prospect of playing the much-hyped point guard.

“Being able to play against Trey Burke – his name is out there a lot, everybody talks about him. He is a great point guard,” Tharpe said. “For him to play in his second year and the improvement he’s made, that’s great. We just have to make sure we play with the same type of intensity as him.”

Burke’s point production will likely rely little on what Kansas does defensively — Burke has proven his ability to score on the best defenses in the country time and time again this season. However, Burke’s overall impact offensively will be muted if he isn’t able to get in the paint.

“Just try to keep them (Tim Hardaway Jr. and Trey Burke) out of the paint. The less paint touches they have, the less we have to help.”

It will be interesting to see how much Kansas is willing to help against Michigan. The Wolverines would likely prefer it, considering the opportunities that open up for Glenn Robinson III and Nik Stauskas when their defenders help on drives. But if Kansas decides to stay at home, they have a nice option at the rim in Jeff Withey, shot-blocking extraordinaire.

Withey, for his part, is confident in the match-up.

“I think they’re really similar to North Carolina. They play small, they like to spread the floor and shoot a lot of threes,” Withey said. “I’ll probably feel really confident in the game.”