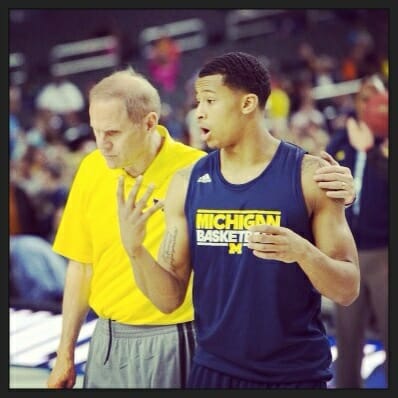 Throughout this weekend, the country’s various basketball awards organizations have been confirming what Michigan fans have known all season: Trey Burke is the best player in the country.

Burke took home his third Player of the Year honor late Friday morning, this one named after the legendary UCLA coach John Wooden. Just hours earlier, he won the USBWA Oscar Robertson Player of the Year trophy, and got to meet the “Big O” himself.

“I’m honored just to be in a conversation with Oscar Robertson,” Burke said immediately following the ceremony. “I may not seem like it, but I’m really happy. I’m excited. Just being able to meet with him, and just talk to him, it means a lot.”

While Burke’s numbers don’t quite match up with Robertson’s legendary season-long triple-double per-game average of 1961-62, they are impressive: 18.8 points, 6.8 assists, 3.1 rebounds, 1.6 steals and just 2.2 turnovers per game are the best statistical accumulation of any player’s by a long shot.

But with Burke, it’s not just about the numbers — it’s how he got them. Burke has been spectacular this season, but a lot of players can be spectacular sporadically. What makes Burke’s accomplishments so impressive this year has been the consistency with which he dominates games. Sitting at the helm of Michigan’s offense night in and night out, Burke is the consummate point guard: he takes the right shots, makes the right passes and makes the right play with astonishing regularity.

Part of the reason he’s been so consistent is his steadfast refusal to acknowledge the little aches and pains that come with starting every game of a college basketball season. To Beilein, Burke’s toughness is one of his point guard’s finer qualities.

“He is one tough young man. There’s been three or four times this year when a trainer has come to me and said ‘Trey, this is bothering him or that is bothering him, but he doesn’t want you to know about it,'” Beilein said when Burke accepted the Oscar Robertson Player of the Year. “We’d have to almost beg him to come out of plays to say you need some rest. It’s that toughness, mentally and physically right now, that has given us such trust in the way he plays.”

It’s that sort of attitude that also inspires the confidence Burke’s teammates have in his ability to guide them through any match-up this season. Burke doesn’t demand anything of his teammates that he doesn’t demand of himself, making him an effective leader.

His leadership was on display most when his team was up against the wall in its Sweet Sixteen game against Kansas. It’s something Burke has been working on since the off-season.

“I just worked on my lateral quickness, my lower body strength, and being a better leader out there,” Burke said. “Coach asked me at the beginning of the year, what were my goals. I told him, to try to get to Atlanta and win a national championship. I feel like if we get that far, my personal goals will take care of themselves. I definitely felt like those camps this summer helped me out.”

For the Wolverines, Burke’s award feels like a team award, because he allows it to. Mitch McGary talked about Burke’s constant recognition of his teammates and their part in his individual success.

“He’s gotten so many awards, and he credits us all the time,” McGary said on Friday. “He gives credit to us and thanks us every day for pushing him and letting up on him. He’s a tremendous player and has tremendous character off the court. These honors are well-deserved and I’m happy for him.”

“His attitude’s been great about it. That’s what I love about Trey. He won the Oscar Robertson award this morning, after receiving that he came straight to practice and you couldn’t even tell he won it,” Robinson said. “I really appreciate that about Trey and how he approaches the game.”

True to form, Burke is respectful yet borderline dismissive when it comes to the individual accolades. Compared to winning a national title, they are so far down his list of goals he can barely see them.

“All these awards are definitely accomplishments, definitely great to have, but I don’t want these awards to get in the way of what this team’s accomplished,” Burke said. “We have a goal of winning a championship and that’s what I’m trying to focus on right now.”