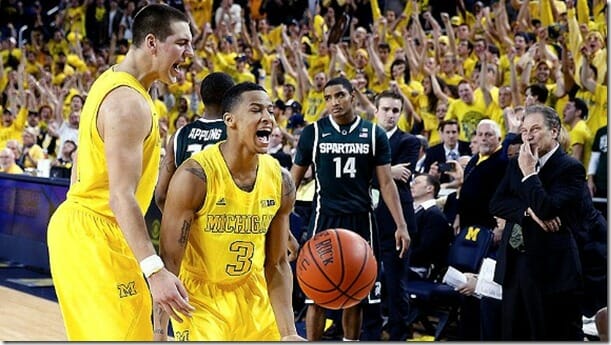 Trey Burke is headed to the NBA after two seasons in a maize and blue uniform. Michigan fans frustrated with his decision are missing the point.

Burke’s accomplishments at Michigan should be celebrated despite his short career. In just 73 games, Burke led Michigan to 55 wins and accomplished more than any Michigan player in at least two decades. He did it against the odds and he did it the right way.

Burke isn’t symbolic of the problems with the NBA early entry rules. He’s an example of everything that can go right when a player makes smart decisions. Burke could have gone to the league last season but realized he could accomplish something special in Ann Arbor. He did just that, and he’ll be a top 10 pick because of it.

Players often become preoccupied with the NBA Draft after coming so close to ending their college careers. Burke’s return to Ann Arbor wasn’t clouded by me-first basketball or stat padding, it was a nearly perfect season. Burke didn’t just average 19 points per game, he set Michigan’s single season assist record. Burke was great as a freshman, he was special as a sophomore.

“He came back with really a fire in his belly to improve his game in the areas that he thought he had to improve in and the coaching staff thought he had to improve in in our research with NBA general managers and scouts, and he just went to work,” Beilein explained at a press conference on Sunday. “There wasn’t one time that I felt he was playing for the NBA and not playing for Michigan. His focus in practice and games was ‘how can I help Michigan now?’”

College basketball in the 21st century is defined by hype. Program saviors are crowned in July on the AAU circuit. Coaches are fired based on their ability to recruit.

When Trey Burke committed to Michigan on August 24th, 2010, the Wolverines were in Europe getting blown out by professional teams in Belgium after a losing season. Burke’s commitment was welcome but there was no hype. Burke was not anointed Michigan’s savior like a Cody Zeller and there was no “movement,” rather he went to work and did it the hard way. Nobody other than Trey Burke expected what the next two years would hold.

His workout videos from the summer of 2011 have been well-documented and were symbolic of his rise from forgotten AAU point guard to All-American pro. John Beilein marveled at the success of Michigan’s player development program on Sunday, calling it a great problem to have and raving about Burke’s rise.

“This young man was not highly recruited – not a top 50 player projected, barely made the top 100 – those things are such a challenge to him and an opportunity for him to show what he had inside of him.”

All Burke wanted was an opportunity to play in the Big Ten. Beilein gave him that opportunity and he turned it into something special. Recruiting pros is one thing, creating them is something else. John Beilein didn’t recruit a pro in Trey Burke, he manufactured one.

Michigan fans should cherish Burke’s accomplishments in Ann Arbor and celebrate them.

Did he fall one goal short of the ultimate goal of a National Championship? Sure, but he willed this program to new heights. Heights that won’t be forgotten. Remember his shot in Dallas. Remember his thievery of Keith Appling or his many other game winning plays.

Trey Burke was never the biggest, the strongest or the most athletic, but after two years, he’s a Michigan man. His impact and legacy won’t soon be forgotten. There are thousands of kids dribbling a basketball that want to be the next Trey Burke. Michigan’s offense has established itself as a point guard’s dream. Derrick Walton will be handed the reins next, but the Wolverines should be able to open up doors in future classes just by rolling out highlights of Trey Burke in action. The best point guards in the 2015 and 2016 classes know who Trey Burke is, and it’s clear that Michigan has an offensive framework to allow guards to thrive.

“When kids are looking at Michigan, they see that coach Beilein allows you freedom as long as you are responsible,” Michigan assistant coach LaVall Jordan explained. “Some guys get that part earlier than others, but as long as you do you can really flourish here at Michigan.”

Next season will be a new era and the Wolverines are certain to take something of a step back without the best player in the nation lacing up his shoes on a daily basis. But this is a program now built to last. While Tim Hardaway Jr., Glenn Robinson III and Mitch McGary will all make similar decisions in the coming days or weeks, Michigan’s program will live on.

Burke’s impact on the program won’t soon be forgotten. Two years might seem short to traditionalists, but Burke’s career was about something that Michigan hadn’t seen in a long time: banners. First a Big Ten Championship banner then a Final Four and NCAA Runner Up banner. In time, a No. 3 jersey emblazoned with Burke’s name should be added to the collection to cement his legacy.