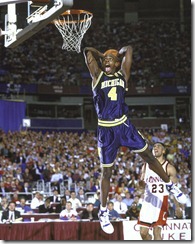 While reconciliation between the University of Michigan and the banned players doesn’t necessarily seem imminent, there is enough tact involved in all parties’ comments to believe something could happen eventually. We rounded up some of the best reactions from David Brandon, players that were involved and notable media voices.

Webber hasn’t commented officially but he has been active on Twitter. He tweeted “OK!!!” at 12 midnight on May 8th, retweeted several comments about Michigan and tweeted a picture of Aaliyah wearing his #4 Michigan jersey later in the afternoon.

Others have been active in the media, including Michigan athletic director David Brandon, who spoke with the Associated Press:

“I’ve never met any of those guys, and I am looking forward to meeting them,” Brandon said late Tuesday night in an interview with The Associated Press. “If any of those guys are interested in meeting with me, that would be great.”

“I wasn’t around when all of this happened,” Brandon said. “I’ve never had an opportunity to interact with them to talk about anything and I am hopeful that opportunity will present itself.”

“This morning, I felt really good about the dissociation being over and having the opportunity to reunite with the University of Michigan,” Taylor said. “I’m excited to talk to Mr. Brandon and coach (John) Beilein. While I had some success in the NBA, there was a void in my life because of the circumstances. I had three of the best years of my life there and I love that school and all that it stands for.”

Jalen Rose, rarely caught without a comment, was active in the media as well. Rose told the Detroit News that it will come down to an apology from Webber to Michigan.

“I don’t see much movement and I don’t see the sense of urgency at all,” Rose said. “I see a line in the sand that was drawn basically saying if Chris doesn’t apologize, they’re going to punish everybody else.”

“It’s not on Chris; it’s on Michigan,” Rose said. “They can choose to acknowledge what we accomplished regardless of what he does.

Meanwhile Dan Wetzel makes a compelling case that reconciliation should hinge on a completely different apology: the University apologizing to Chris Webber.

The most puzzling – and unfortunate – penalty, however, was when the NCAA forced Michigan to “disassociate” itself from Webber and the others for a decade, a term that ended on May 8.

The disassociation worked well in pushing the spotlight of blame away from the system or the coaches or the administrators or the circumstances or even Martin, and right on the players. It’s all Chris Webber’s fault!

Never mind that the university has numerous buildings bearing the name of Alfred Taubman, a billionaire donor who actually went to prison on antitrust charges and it never disassociated from him.

This was the NCAA! This was bad! And besides, isn’t Webber sort of unlikable and aloof? Didn’t a lot of people hate that hot-dogging, baggy short-wearing team of his? And didn’t he once complain it wasn’t fair that he couldn’t afford to eat at McDonald’s while the school sold his jersey in the bookstore when, in fact, he was flush with Martin’s money? What a liar.

It all fit nicely in a box, wrapped in a bow. Come back and apologize C-Webb, and we’ll even show you how to forgive and forget. How magnanimous of us.

Yago Colas wrote an editorial viewpoint on the Fab Five and their banners in early February that’s well worth a read.

Lastly, the banners represent our past — a complex past both inspiring and troubling. In having such a past, the University is no different from any of us, the individuals comprising it. We may feel the impulse to turn our backs on aspects of our past that trouble us. But an important part of the process of maturing with integrity, as individuals, as a community and as a society, involves opening ourselves to that past. Restoring the banners sets an example for members of the Michigan community and, indeed, for other universities and social institutions in general, that the best way to move forward is by fearlessly incorporating an understanding of that past into the present as we orient ourselves toward the future.

Nicole Auerbach runs down some of the basics in USA TODAY while Nick Baumgardner details the timeline over the last 17 years.

While it seems the actual Final Four banners might never grace the rafters again, the chance of a “Fab Five” banner seems somewhat more likely. Rose discussed that option during a quick interview on ESPN.