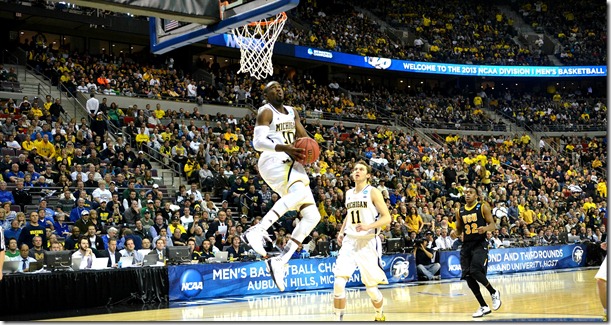 Report Cards are back and a month late is better than never. We’ll start with the NBA Draft prospects and work our way through.

When Tim Hardaway Jr. committed to Michigan, he was a 6-foot-4, rail-thin 3-star prospect whose skills were limited mostly to outside shooting. As his body and his skill set developed at Michigan, so did his role.

He carried Michigan to the NCAA tournament in his freshman season, supplementing Darius Morris’s passing with a torrid 3-point shooting streak to close the season. His sophomore year brought the challenge of deciphering his role alongside another new, supremely talented back-court mate, Trey Burke. While his sophomore year was a step back, his final season was clearly two steps forward. Hardaway improved across-the-board and expanded his game to include rebounding and ball-handling duties, as well as an augmented defensive role. His new versatility allowed him to finally feel secure in his role alongside Burke, who blossomed into the best player in the country.

While Hardaway improved steadily during his time at Michigan, game-to-game consistency was always a struggle. This rule held true this past season — there were times Hardaway appeared utterly unstoppable, and times when he seemed to force matters. Especially during the later portion of the season, it felt as though Hardaway attempted to put the team on his back at times, often with disappointing results (see: Final Four). But while his career-long lack of consistency persisted into this past season, Hardaway’s disposition and effort was never questioned and he won Michigan a lot of games (at times almost by himself). His scoring may have been up-and-down, but Hardaway limited the “disappearances” that plagued his first two seasons in Ann Arbor.

Despite the regression in 2-point shooting, Hardaway was still more aggressive. Here’s a look at the Synergy Sports data for the biggest play-type shifts (positive and negative) in Hardaway’s game. More transition, isolation and spot ups with fewer shots off screens.

Hardaway improved in every area from last season, and was absolutely critical to Michigan’s most successful team in two decades. For the most part, Hardaway played within his role and was a great leader for a young Wolverines squad.

Bottom Line: Tim Hardaway Jr. has had one of the most successful careers of any Michigan basketball player in the Beilein era. He came in as a relatively unheralded freshman and worked his way toward becoming a first-team All-Big Ten player who will likely find himself playing in the NBA next year. He was one of the hardest workers on the team and set an excellent example from young players with his legendary preparation and diligence.

There are flaws to Hardaway’s game, but on the whole his career at Michigan was an unmitigated success. He was at times frustrating to follow because of his streakiness, and there were times as he was growing into his role that he seemed to let the pressure get to him emotionally. But we got to watch Hardaway for three years work his way into the player he is now: a versatile, tough, smart player who will do whatever his team needs him to do to win. Other than his backcourt mate, the National Player of the Year, there are few players over the last decade that won more games by putting Michigan on their back than Hardaway managed to do – a feat even more impressive considering who he shared the ball with.