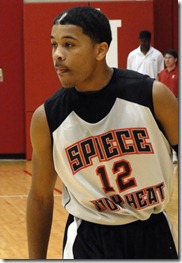 Since decommitting from Indiana last month, James Blackmon Jr.‘s recruitment has had no shortage of hype. The 6-foot-3 senior has received interest from nearly every top school, including Kentucky, Louisville, Michigan State, Florida, UCLA and Michigan, along with continued recruitment from Indiana.

Blackmon has visited Louisville, Kentucky, Michigan State and Indiana since his deccommitment, and on Saturday he was in Ann Arbor to watch Michigan football defeat Central Michigan 59-9 at the Big House. He also added a scholarship offer from Michigan while on campus.

After touring campus with the coaches and checking out the academic buildings, Blackmon dropped by the team tailgate at the Crisler Center to talk to the current Michigan players, saying he talked to Mitch McGary and Zak Irvin the most. He relayed that they told him “how good things were.”

“I think it just has a college feel, kind of,” Blackmon said of his impression of Ann Arbor. “I like how there’s a lot of students out who were into the sports and there was people everywhere in the streets.”

Blackmon said he was with the coaches most of the day and that they had some “private conversations.” It was later, after the game had ended, that Blackmon received his Michigan offer.

He said finally getting the offer felt “surreal.”

“I really don’t have a list, and I really haven’t made a decision, but I like (Michigan) a lot.”

The Fort Wayne native said that while he likes Michigan a lot, he hasn’t finalized the next steps of his recruitment.

“I don’t know,” he said. “I have to figure out what officials I’m going to take.”

But Blackmon did say that he “thinks [he] will” return to Michigan when he does take that step.

For now, Blackmon’s recruitment presses on. He joins Devin Booker, Trevon Bluiett and Kameron Chatman as the fourth member of the 2014 class to hold a Michigan offer.

“I’ve had a lot of contact with Indiana,” Blackmon said. “Really a lot of (schools) but I’m just trying to find the best fit for me. I talk to Michigan a lot now, Kentucky. There’s a lot of schools that I talk to a lot, but that is not necessarily going to make my decision.”