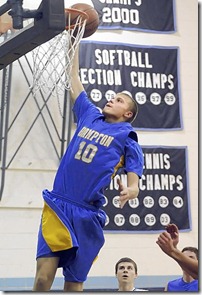 As the summer months fade into fall, Michigan continues to wait on its top 2014 offerees to pick their destinations. Devin Booker, Donte Grantham, Kameron Chatman and James Blackmon Jr. all have yet to make a decision. DJ Wilson and Jonah Bolden have yet to visit Ann Arbor.

Until then, Michigan is left to scout and recruit more under-the-radar 2014 prospects, specifically at the combo forward position, unofficially recognized as the player who will succeed Glenn Robinson III after the sophomore’s likely early exit following this coming season.

Ryan Luther is the latest player to emerge on Michigan’s target list and the Wolverines have already been in to see him twice, including a visit from John Beilein. At 6-foot-8 and possessing a diverse skill set, Luther certainly fits the bill as a player who can play inside and out.

“I guess you could call me a stretch four,” Luther said during an recent interview. “Whether I’m a four or a three, it depends. I’d say I’m just versatile. I can shoot it, obviously. I’m kind of big, so if I get a smaller guy on me I can go inside. I’m versatile and skilled.”

Luther was hard at work this summer on improving his versatility — ballhandling skills and establishing a midrange game were his focus during AAU season. He’s also looking to get stronger over the course of this high school season.

At this point, Luther’s recruitment has involved mostly schools in the Atlantic Ten conference. Duquesne, Dayton and George Washington are the schools after him the hardest right now. He took an official visit to Duquesne last weekend and was at Dayton this weekend.

However, his recruitment seems to be picking up. Pittsburgh recently extended an offer after Panthers coach Jaimie Dixon watched him in open gym and liked what he saw.

“Coach Dixon came in for an open gym last week, and then he called me the next day and he offered me,” Luther said. “I’m excited (about the offer).”

Michigan’s interest has been steady for the past couple of weeks. According to Luther, he has exchanged phone conversations and text messages with John Beilein. Along with that communication, Michigan coaches have been at two of Luther’s open gyms so far this fall.

Bacari Alexander attended one two weeks ago and John Beilein was in the building on Tuesday.

“We’re playing pick-up, and we’re doing drills and stuff with the team,” Luther said of the open gym Beilein attended. “It was kind of weird. You see him on TV obviously, with how successful Michigan was this year. It was sort of weird, but cool.”

After watching Luther play, Beilein had a brief conversation with the Allison Park, PA. native.

“He just said that they found out about me late and that they like me some,” Luther said. “They said that depending on how their recruiting class finishes up or what happens with that and then maybe we see about a visit. I guess there’s a recruit who still needs to decide. He said after that, then they’d have a better idea and maybe we could works something out.”

In Luther, Michigan sees a potential answer to its stretch four problem should their higher-priority options fall through.

Luther said he recognized Michigan as a team that ended up having a great season last year, and one that has attributes he’s looking for in a school.

“One of the main things, obviously, is whether or not it’s a good school. And most of the schools recruiting me are good academic schools. I guess just a good fit, like the coaching staff and style of play.”

The style of play he referred to sounds a lot like what’s generally run at Michigan.

“I’d say a more up-tempo, kind of like spreading the floor with shooters,” Luther said. “I think that would be an advantage to me, let me get some space to stretch the defense and stuff like that.”

It remains to be seen whether or not Luther will be invited to visit Ann Arbor. It depends entirely on what happens with the remainder of Michigan’s offers in the class of 2014. For now, Luther must wait and see.