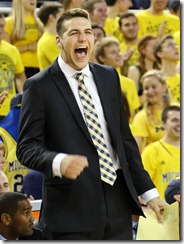 Michigan still doesn’t know when it will have its All-American big man back in the lineup. The one thing we do know: Mitch McGary will not be playing in tomorrow night’s regular-season opener against UMass Lowell. (Photo: Dustin Johnston)

“He’s not going to play (tomorrow), no,” John Beilein said during his press conference this afternoon. When asked about McGary’s progress, Beilein was predictably cagey.

McGary has been unable to practice with the team since the beginning of September due to what the team has called a “lower-back condition.” Since then, nearly every update about McGary’s health has been similar to the one Beilein offered this afternoon: he is progressing. He is doing well. We have no idea when he’ll be back.

But this morning, when Beilein was on the Huge Show, which is syndicated and broadcast across Michigan, he was asked about the possibility of sidelining McGary until the beginning of the Big Ten season.

Beilein stuck to the company line on McGary’s injury, noting that he’s “progressing really well and getting better every day” but did provide a slightly more detailed description on his thought process.

“His future is first and foremost and trying to make sure that when he is able to play, he’s able to play where he can help the team as well. There’s one thing of getting him in shape again and all the things that we saw once he met some of the criteria with his body weight and being in shape last year he became a really special player.”

When asked, Beilein said he wouldn’t have a problem shutting down McGary for the entirety of the non-conference season, “if it came to that.” When Mark Snyder of the Detroit Free Press tweeted out that update, ESPN’s Jeff Goodman had an interesting response.

@Mark__Snyder McGary had mentioned to me back in early October that "as long as he is back for league play."

There hasn’t been much out of the Michigan camp regarding McGary, so it’s safe to say this constitutes pretty big news. What does McGary possibly being out until conference play mean for Michigan? For one thing, it means the two-big possibility is not as readily available. With Jordan Morgan’s struggles at the four and Jon Horford playing the five, it probably won’t be something seen as often as it would be if McGary were slotted at the four.

“I think we want to keep the versatility to be able to do both of (the big and small lineups), and that’s the way it’ll be,” Beilein said. “It depends on who we’re playing. Our research tells us that you don’t play two bigs very much. Now we have to do what’s best for the team, as well. Waiting on Mitch has been the one thing that hasn’t allowed us to make a solid determination for the long run but for the immediate future, we have a plan.”

Beilein revealing the possibility that McGary might not see the court until the Big Ten season raises plenty of questions. But as of now, Michigan is still short on answers. Or if it does, it’s keeping it under wraps for the foreseeable future.

“We do have an idea of a timeline if it keeps progressing as positively as it is, but we’re just not going to share that right now,” Beilein said.