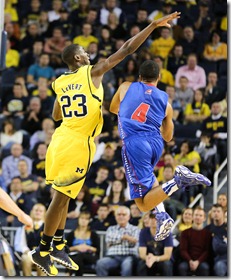 In the first half of Michigan’s season-opening win over UMass Lowell at the Crisler Center, the Wolverines looked as though they had left their offense somewhere in the bowels of the Georgia Dome down in Atlanta. (Photo: Dustin Johnston)

“(UMass Lowell) shortened the first half and didn’t give us any transition buckets. Made us make shots, and we didn’t,” Beilein said. “The silver lining to that is that we had to play basketball and somebody had to make some plays to get us going. We … shot awful from wherever we were, and got a little antsy at times with our offense.”

It was abundantly evident that Michigan was out of sync on the offensive end of the floor. But defensively? That was another story.

The Wolverines played with great defensive intensity from the opening tip. And at the end of the first half, that was what Beilein was thankful for.

“Good thing our defense held them to 33 percent (shooting from the field), 23 points or we would have been down at half,” the coach said. He’s right. When Michigan’s offense couldn’t throw the ball into Lake Michigan, its defense stepped up in a big way. But if the team’s first-half defensive performance was impressive, what it did in the second half was on another level.

Admittedly, this is UMass Lowell we’re talking about — a team that is entering its first season in Division I, playing in front of far more fans than a sellout crowd at their home gym. That being said, the Wolverines completely shut down the River Hawks to kick off the second frame. UMass scored two points on a make by Akeem Williams (who ended up with 16 on the night) about 45 seconds into the second half after a Wolverine turnover.

After that, Michigan didn’t allow another field goal until there was 9:06 remaining in the game.

How did Michigan hold them scoreless for so long? One word: turnovers. The Wolverines forced seven turnovers during that 11-minute span. For the half, UMass turned the ball over on an astounding 31 percent of its possessions. Compare that to the first half, when only 18 percent of of its offensive possessions ended in a turnover, and you have your story of the game.

Michigan’s defense was everywhere. Five different players recorded at least one steal, and the thefts occurred on both the perimeter and in the post. There was simply no safe place for the River Hawks to hide.

The players who picked the most pockets? That would be Caris LeVert, Glenn Robinson III and Derrick Walton. Walton and Robinson had three apiece, and LeVert had two.

Beilein credited the defense with Michigan’s turnaround in the latter frame on the offensive end as well.

“The defense was really good” Beilein said. “And then we got out and got some clean rebounds and made some plays in transition.”

What makes Michigan’s defense so difficult to handle, especially on the perimeter, is its length. Tonight, Michigan started Walton, Nik Stauskas, LeVert, Robinson and Jon Horford. That’s one Zak Irvin away from the much-anticipated “sixty-six” lineup, which Michigan fans have been waiting to see give opposing offenses fits.

They may not have gotten to see the “sixty-six” lineup tonight, but Michigan may not even extra height at the point guard spot — Walton was incredibly active and in many ways instigated the defense in the half court.

Michigan’s length clearly frustrated UMass Lowell. After the game, Akeem Williams admitted that the Wolverines’ length made the game harder for him, saying his passes were disrupted as a smaller guard. Williams summed up the effect of Michigan’s length honestly at the podium after the game.

“It was very hard to see the court,” Williams said.

Michigan still has another middling opponent to play before a road test at Iowa State and the season swings into full gear. There are still aspects of the offense the Wolverines clearly need to figure out. However, they have all the tools to form a defense capable of keeping them in games.

The defense kept Michigan them in control of the game against UML when the offense struggled. What remains to be seen is how the defense responds in a similar situation down the line.