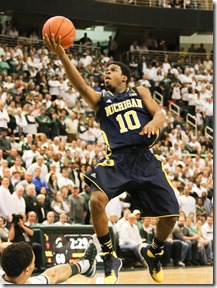 EAST LANSING — “Derrick, he’s growing up right before our eyes.”

That was Nik Stauskas immediately after Michigan’s 80-75 victory over Michigan State at the Breslin Center. It was the Wolverines fifth win in seven tries against the Spartans since 2011. And no one had a bigger hand in Michigan’s third win in a row over a top-10 opponent than Derrick Walton. (Photo: Dustin Johnston)

He was Michigan’s co-leading scorer, along with Stauskas, with 19 points. He grabbed five rebounds and racked up four assists. Perhaps the most telling sign of Walton’s “growing up” was in the turnover column — the freshman registered just one, in the final two minutes of the game. For much of the season, it has appeared as though Walton was simply trying to keep his head above water, still learning the system and at times playing tentatively because of it. But on Saturday, it was a different story.

It was, unquestionably, the best game of the young point guard’s career.

“I always feel like a freshman, but I knew I had to play like a veteran,” Walton said outside the visiting locker room after the game. “I got all the guys counting on me to make the right plays at the right time. Coming in here, my mindset was to stay poised and make the right plays.”

That’s what made the Walton who 15,000 screaming Spartan fans saw at the Breslin Center tonight so different than the Walton Michigan fans have seen so far this season. He didn’t just play well — he played like a veteran. In the past, even when Walton played well, there were little things that reminded you he was a first-year player. The two missed free throws late against Minnesota come to mind. 16 points and three assists against Penn State — to go along with three turnovers.

In East Lansing on Saturday Walton was, statistically at least, virtually flawless. He missed three of his five twos, but hit both of his 3-point attempts. He made nine of his 10 free throws. He didn’t turn the ball over until the final two minutes. In an atmosphere Walton said was the loudest he’d ever experienced, he played as though he’d been there before.

“One of the reasons I know why Derrick embraced coming to Michigan was the tremendous games he was going to be able to play in the Big Ten,” John Beilein said of Walton after the game. “This is a great environment, like all the great environments are.”

Walton set the tone for his career game early, fearlessly hitting a 3-pointer on Michigan’s opening offensive possession. He didn’t shy away from Michigan State’s notoriously physical play, either — the Detroit native hit two layups at the rim with contact for and-1 situations, one at the end of each half.

When asked about the physicality of the Spartans, Walton all but brushed it off.

“I wouldn’t say (it was the most physical defense we’ve played) this year because practices are very physical,” Walton said. “It’s kind of the norm now just because we prep playing like that. Coming in, we were just sort of expecting it.”

Those could be considered bold words, but Walton backed them up. Throughout the game, Walton was matched up against a fellow in-state player four years his senior, Michigan State point guard Keith Appling. And all game, Walton proved over and over again that he wasn’t intimidated in the least. In fact, Walton was the opposite of passive, seeking out ways to affect the game late — at no point was this more obvious than on his three-point play with two and a half minutes left in the game.

Walton continued to seek out play-making opportunities when he refused to give up the ball late when Michigan State started intentionally fouling him. He didn’t disappoint in that area either, hitting seven straight free throws on his way to a 9-for 10 night from the line.

“I’m a guy who’s comfortable shooting free throws in late-game situations,” Walton said. “I knew that we were blitzing off the ball so lofting a pass would have been very dangerous. So I just kept the ball myself.”

Walton began his career at Michigan by replacing a Player of the Year and perhaps the greatest point guard in Michigan basketball history. It hasn’t always been easy for the freshman this season — he’s shown flashes of ability, but more often it’s been apparent he’s still learning.

“We just tell him, ‘hoop,’” Jordan Morgan said of Walton after the game. “Just play, man. Our system can get complicated, and some guys can get caught trying to tread water. We just tell him, ‘players gotta play and sometimes you just have to play ball.'”