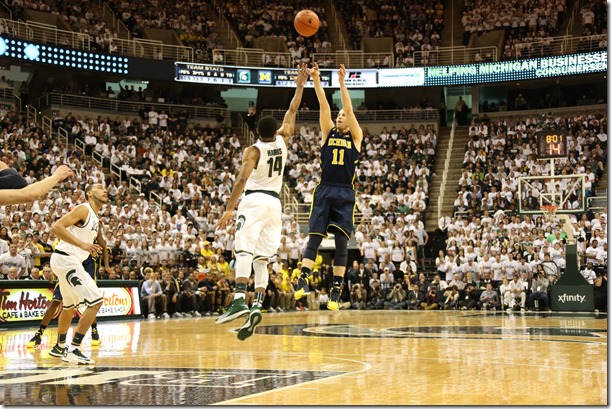 Michigan’s win in East Lansing on Saturday night was its fifth in its last seven tries against the Spartans. The victory was its third in a row over a top ten opponent, a feat that hasn’t been accomplished since 1987. The Wolverines have reeled off nine straight victories and, most importantly, control the Big Ten.

Michigan State had the crowd, it had the lead and controlled the game for 30 minutes. The Spartans were imposing their will and pushing Michigan all over the court, but could never stretch their lead to double digits. The Wolverines hung in with a rope-a-dope effort that lasted until late in the second half when they finally made their run.

Trailing by as many as eight points in the second half, Michigan battled back to tie the game at 60-60 with four minutes to play. Then the Wolverines stole the game with two plays – both keyed by Jon Horford blocks.

First, Caris LeVert pushed the ball on the break and flipped it to a trailing Nik Stauskas. Three points. Seconds later, Derrick Walton leaked out and LeVert found him streaking down the floor. Catch. Layup. And one. In less than 60 seconds, Michigan had a six point lead that it would never relinquish.

Gary Harris was the best player on the floor, but his 27 points and impressive defensive effort weren’t enough. Nik Stauskas had to battle for every touch let alone basket, but he still managed 19 points on 12 shots. Derrick Walton played his best game as a Wolverine, finishing with 19 points, five rebounds and four assists while Caris LeVert also added an important 17 points and eight rebounds.

Michigan’s offense, admittedly boosted by 16 free throw attempts in the final two minutes, continues to post ridiculous numbers. The Wolverines amassed 1.28 points per possession – Michigan State’s worst defensive performance since 2011 – and scored 1.45 points per trip in the second half while hanging 50 points on the Spartans.

Michigan did it with threes, connecting on 11-of-19 (58%) long range efforts. Entering the game making over 60% of its twos in Big Ten games, the Wolverines were just 11-of-31 (35%) on 2-point attempts. Michigan State’s defense was designed to take away the lane – something it accomplished very well – but Michigan just made a ridiculous number of threes. In the second half, the Wolverines finally got to the free throw line, attempting 27 free throws to just 23 field goal attempts.

Beyond rebounding, Michigan’s defense continued to struggle. The Spartans scored a blistering 1.20 points per possession and shot 50% on twos and 42% on threes. Michigan had no answer for Gary Harris, who scored 27 points on 9-of-15 shooting, and struggled to defend Michigan State’s transition game. The Spartans scored 15 points off Michigan turnovers and exploited the Wolverines repeatedly in unsettled situations off long misses as well.

Michigan just keeps getting better. Michigan State was shorthanded, but the Wolverines won on the road at the Breslin Center despite Glenn Robinson III playing an underwhelming game. The most encouraging trend? Derrick Walton is growing up. Next up is a bit of extended rest before a home date with Purdue on Thursday night.