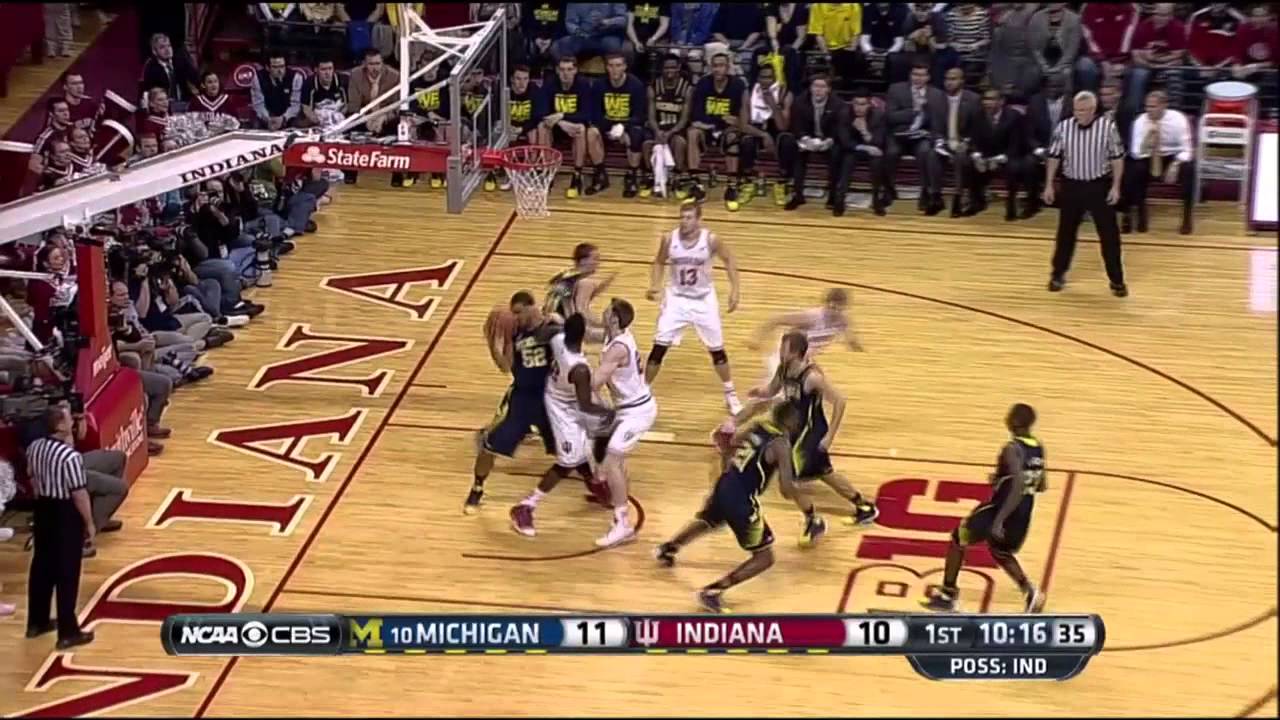 From the very beginning of Michigan’s disappointing 63-52 loss to Indiana on Sunday, the Wolverines experienced trouble generating offense. As of the start of this sequence, their only points came off a Jordan Morgan hook shot and free throws. Then midway through the first half, Michigan was able to get out on the fast break after some defensive stops and make a quick 6-0 run. These points were due in a large part to excellent defensive rebounding by Jordan Morgan and good vision by Spike Albrecht. Morgan was a beast on the boards in the opening frame, pulling down nine rebounds, often among many Hoosiers in the post. The first play, however, is the result of an Indiana turnover. Fortuitously, Austin Etherington throws the ball directly to Albrecht. When Jonny Marlin, the only man back, steps up to the free throw line to stop the ball, Albrecht hits Caris LeVert for the dunk. On the second play, Morgan starts things off with the strong defensive rebound before Zak Irvin takes it himself, pulling up just inside the 3-point line. On a fast break, guarded as he was, I would like to have seen him either pull up for a three or take it to the rim. Finally, after Another great defensive rebound by Morgan, Albrecht makes a great pass to Irvin, who finishes with the reverse. It’s worth noting Indiana’s perplexing lineup at this time: Marlin, Hanner Mosquera-Perea, Jeff Howard, Etherington and Stanford Robinson are not exactly imposing offensively. This could have been one reason Michigan was able to get the defensive stops needed for this run.

2) Yogi Ferrell catches fire from beyond the 3-point line

Indiana sophomore Yogi Ferrell had an absolutely absurd game for the Hoosiers on Sunday, proving just how much of a talent he really is. Ferrell scored 27 points on 7-for-8 shooting from the 3-point line in a shooting clinic that ultimately doomed the Wolverines. Indiana doesn’t have much else other than Ferrell as far as offensive weapons, and the Hoosiers were making sure to get him the ball all night. All seven of his threes are in this clip, and they span the first and second halves.

Here’s John Beilein on Ferrell: “I think (Indiana is) going to go as Yogi goes right now. I think it was the Wisconsin game where he hit a whole bunch of shots as well, but the Northwestern game he was 1-for-8. Northwestern says shoot that ball, you’re not gonna make it. The same shots he missed against Northwestern he made today. He’s a good player.”

Late in the second half, Michigan found itself still in the game despite extremely poor offense. The Wolverines desperately needed to find a way to take Yogi Ferrell out of the game, and John Beilein went to the 1-3-1 zone as a possible answer. For the most part, it worked, and in the first possession in this sequence, it worked to perfection. With Caris LeVert working the top of the zone, and Glenn Robinson III and Nik Stauskas trapping with him at the 3-point line, Indiana didn’t know where to go with the ball. Michigan eventually forced a shot clock violation. On the second play, Indiana does what you have to do against the 1-3-1: get it into the corner either for a shot or something baseline. Will Sheehey hits Noah Vonleh cutting down the middle after getting behind Jon Horford, but Zak Irvin is there ready to take the charge. That was excellent awareness by Irvin, who has had trouble manning his spot in 1-3-1 looks this season. Finally, Indiana once again gets the ball into the corner with Sheehey, who drives baseline before hitting a cutting Vonleh. Jordan Morgan plays strong defense and Vonleh misses the lay-in. Michigan employed the 1-3-1 for about as long as it could in this game. It tends to eat up a lot of clock as teams figure their way around it, and that was time Michigan simply couldn’t spare late in the game on Sunday.

With three and a half minutes left in the game and Michigan down only four points, the Wolverines had a chance on the offensive end to close the gap and bring this one down to the wire. But an offense that hadn’t been able to come up with answers all night couldn’t answer here, and this miss went a long way toward sealing the Wolverines’ fate. We can see the pains Michigan goes to to get Nik Stauskas the ball on this play. Caris LeVert dribbles over to the corner and hands the ball off to Stauskas, who then runs through a Jon Horford ball screen, which Indiana switches. This wasn’t their game plan throughout — normally, Horford would have had the four man on him and Stauskas would have ended up with Sheehey guarding him on the switch. But this play worked out just fine for the Hoosiers, as Noah Vonleh is quick enough to use his 7-foot-4 wingspan to safely corral Stauskas at the top of the key. The sophomore tries the drive but doesn’t get deep enough to draw help, resignedly kicking out to LeVert, who’s covered. Hindsight is 20-20, and maybe LeVert could have taken the ball to the rim instead of pulling up for a contested three. However, with Evan Gordon guarding him, LeVert had a solid 6-inch height advantage and was able to get the shot off over him. The outcome of this play went with the way Michigan’s offense performed all game long: not very well. This was a big chance to close the gap that Michigan ultimately let slip through its fingers.

This rim-out and ensuing Hoosier basket all but sealed the deal for Michigan’s first Big Ten loss. Nik Stauskas got the defensive rebound at one end and brought the ball up the court with scoring on his mind and his team down four with only two and a half minutes to play. Stauskas receives a ball screen from Zak Irvin, which means a switch — the 6-foot Yogi Ferrell for the 6-foot-7 Troy Williams. Stauskas saw a player he likely has an edge on in quickness, unlike Ferrell, and goes right at him. After a hesitation, Stauskas gets in the lane. He actually has Morgan open after Noah Vonleh steps up to help, but instead he shoots the layup and it rims in and out. It was a tough shot, but it could have easily gone in. The problem on the other end was Michigan not getting back on defense after the tough miss. Three Wolverines were running behind Evan Gordon when he received the ball on the fast break, leaving Derrick Walton to deal with him all alone. The freshman actually did a decent job staying in front, but Gordon got the lay-in. This basket sealed the game for Indiana.