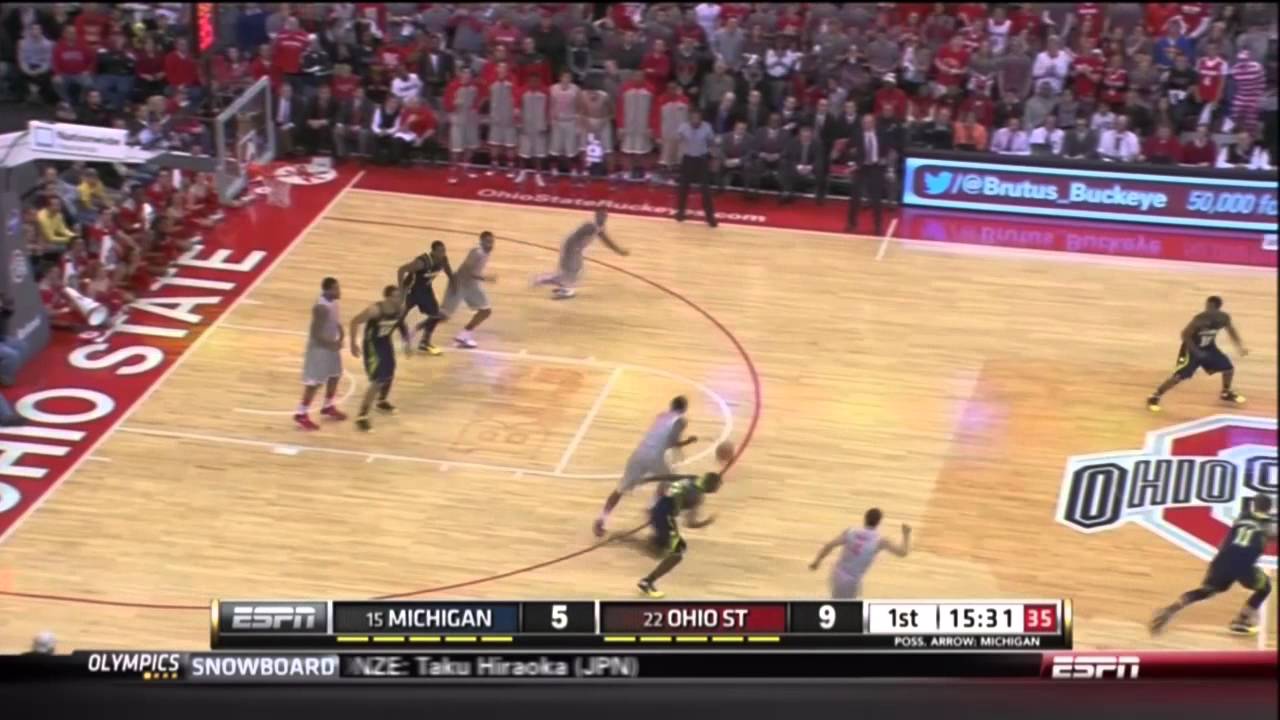 1) Michigan plagued by bad transition defense in the first half

For the first 10 minutes of the game, it looked as though Michigan may have been on its way to another Iowa-type defeat. Unable to make bunnies and steadfastly refusing to guard anyone in transition, the Wolverines were on the ropes early on in their eventual 70-60 win over Ohio State in Columbus Tuesday night. These three plays showcase some of the defensive issues Michigan still needs to take care of. On the first play, Glenn Robinson III misses a midrange jumper and Ohio State gets the defensive board. Nik Stauskas, who tightened up his defense in the second half, gets caught jogging down the court with none other than chronic fast-break dunker Sam Thompson sprinting behind him. Aaron Craft’s vision is too good for him not to see the obvious opportunity afforded by Michigan not getting back on defense after a miss. I hate to echo Dan Dakich, but it’s true — if Stauskas sprints back, that play doesn’t happen. Not to pick on Stauskas, who was actually very good in this game, but only he knows why he thought it was more pertinent to guard against the kickout to Aaron Craft rather than the LaQuinton Ross drive to the hoop on the next play. Ross received the ball at the top of the key on the fast break, and if Stauskas had just stayed in the lane it’s likely he would have drawn the charge. Instead, he jumps out of the way, ostensibly to guard against a Craft three. Truly vexing defense there. Finally, on the secondary break Ross burns Michigan again, with Jon Horford this time ensuring Craft doesn’t get a 3-point look instead of helping in the post. Michigan’s transition defense wasn’t good, and wasn’t exposed in the second half only because the Wolverines made most of their shots.

Michigan was able to keep itself in this game in the first half, pushing through a plethora or missed two-pointers and poor transition defense. But the Wolverines still found themselves down 10 with just over three minutes to play in the half. While the margin wasn’t as bad as it could have been, Michigan was looking to close the gap a bit heading into the break. They did that with a couple of timely 3-pointers from Nik Stauskas and Caris LeVert. The first play shows one of the ways Michigan changed things up in attempting to get Stauskas more open looks in the face of constant pressure. This is just an awesome offensive set drawn up by John Beilein. Stauskas begins the play where he usually does — in the corner. Michigan works the ball to the top of the key and Horford sets an off-ball screen with Craft essentially giving Stauskas the baseline in favor of staying between him and the ball. This is expected. After Horford receives the ball, Stauskas posts up Craft but is covered by both Craft and Amir Williams. Horford passes out to Zak Irvin before running through a screen by Stauskas — something of a new wrinkle. The screen by Stauskas forces Craft to briefly help on Horford so as not to give up an easy layup for the big man.Williams runs Stauskas over on his way to recovering, but Stauskas is on his feet quickly and Craft is faced with a down screen from Irvin. Stauskas uses the screen expertly, fading to the 3-point line as Craft goes around it attempting the steal. From there, it’s catch-and-shoot. That’s just terrific gameplanning out of a timeout, something Michigan fans are used to seeing. LeVert’s three came off of one of Michigan’s favorite looks: fast break corner threes. These two shots brought the deficit down to two points late in the half.

At the 12:16 mark of the second half, Aaron Craft hit a layup to put Ohio State up by six points. The Buckeyes wouldn’t score for another three and a half minutes, and in that span Michigan would take control of the game. The Wolverines did it through improved half-court defense, Derrick Walton rebounding the heck out of the ball, and finding offense wherever they could get it. Zak Irvin, as he is wont to do, jump-starts the offense with a 3-pointer on the wing. Later, Caris LeVert makes a tremendous individual play by jumping the passing lane and stealing a pass from Aaron Craft. The sophomore takes the ball all the way to the hoop and finishes through contact. Michigan next two points came on the fast break as well, though only after Nik Stauskas held up and made a nice hesitation move. After turning around from avoiding a Craft steal, Stauskas saw Ohio State’s defense was far from set and attacked the basket, drawing the foul and making both free throws. After another Derrick Walton defensive rebound, Stauskas goes to the rim again, this time drawing a goaltend on the Buckeyes. Walton again gets the rebound, saving the ball going out of bounds before bringing it up and initiating the offense. Walton displays excellent handle and makes a terrific shot, making himself as long as possible in order to finish through contact from Amir Williams. Great play from the freshman. After this run, the chemistry of the game was completely altered and Michigan was in the driver’s seat, up by six points with under 10 minutes to play.

4) Derrick Walton puts Michigan on his back late

Michigan’s freshman point guard was simply amazing in the second half of this game. Derrick Walton scored 13 second-half points, racked up six assists and, most surprisingly, pulled down 10 rebounds. Time and time again down the stretch in big games, Walton has shown not just a willingness but a desire to make big plays for his team. Part of that undoubtedly comes from growing into his role as the point guard. He talked about that process after the game.

On the first play, we see Walton receive a dribble handoff from Caris LeVert at the 3-point line. Walton realizes he has a step on Shannon Scott and doesn’t hesitate for an instant — just turns on the gas and gets in the lane with his trademark quickness. Walton draws the help of Amir Williams and makes a great dish to Jon Horford for the layup. On the second play, Walton gets to the rim and misses, but Jordan Morgan is there to clean it up. On the defensive rebound, Walton comes down with the ball somehow among two buckeyes and three Wolverines. On the ensuing possession, Michigan gets a tap-out offensive board and Walton ends up with the ball in his hands at the 3-point line. The freshman drills it to put Michigan back up by six points.

Boy, did Glenn Robinson III need this shot. I thought Robinson took good shots in this game and had some tough ones rim out. Though he only played 25 minutes as Zak Irvin continues to encroach on his playing time, Robinson played strong defense and pulled down four offensive rebounds to go along with his nine points. This was his only attempt from deep, and he made it count. This play was made by Caris LeVert, who does a nice job with the ball here, getting Shannon Scott behind him and eluding the steal attempt by Craft before kicking out to Robinson for the three. Robinson makes a nice play by anticipating the ball being slightly off-target, which puts him in position to shoot. He also doesn’t hesitate — he wanted that shot. The sophomore is still struggling a bit, but in this game he made some plays defensively and grabbed some key rebounds, along with hitting a shot to put this win on ice.