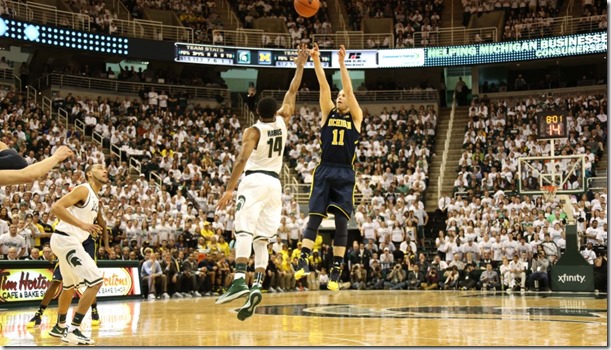 KJ of The Only Colors has been a friend of the blog for years, and the best Michigan State hoops blogger around took the time to preview Michigan’s rematch with the Spartans on Sunday. (Photo: Dustin Johnston)

Gary Harris dominated Michigan in East Lansing, but he’s gone into a slump over the last few games. What has been the difference in Harris’s play?

His performance against Michigan really came in the midst of his only extended run of efficient scoring this year.  For whatever reason, his outside shot just hasn’t been there most of the year.  For the season, he’s down 7 percentage points (34% vs. 41%) from last year in three-point shooting percentage.  I think defenses have done a better job hounding him on the outside, and he hasn’t been able to consistently get into the lane off the dribble.  In Big Ten play, his transition scoring opportunities have also been much more limited.

The reason for hope, from an MSU perspective, going into Sunday’s game is that Harris had a fantastic game in West Lafayette last night, scoring 25 points on 6-9 three-point shooting.  He’d only made 6 three-pointers total in his previous 4 games (on a healthy 27 attempts).

Adreian Payne is back, healthy and apparently dominant once again. What does that mean for Michigan State?

Offensively, it gives MSU a legitimate low post scoring threat again, so they can play inside-out some of the time.  Payne has hit the 20-point mark in 3 of the last 4 games (he’s been back for 5 games, playing more limited minutes in the first game).  He’s picked back up scoring from all over the court: 2-point range, 3-point range, and the free throw line.  Unfortunately, it hasn’t really stabilized the MSU offense overall.  In the five games since he’s returned, they’ve been above 1.2 points per possession three times but at 0.9 points per possession or below twice.  That’s a continuation of a longer trend of up-and-down performances offensively.  So the offensive identity and consistent for this team continues to be a work in progress.

Trice has been very, very good since Appling first sat out 5 games ago.  Over that stretch, Trice has hit 12 of 24 of three-pointers and posted 22 assists vs. just 2 turnovers.  We couldn’t have really asked for more out of him.  And he’ll continue to be a key cog.  Despite Appling’s reported miraculous recovery from his wrist injury this week, he still looks very limited on offense.  In his two games back, he’s scored just 3 points total and looked very hesitant to shoot the ball from deep.

A number of role players have gotten some quality playing time with all of Michigan State’s injuries, who is one player that will make a difference either on Sunday or in March?

Kenny Kaminski has been the biggest revelation as the season has gone on.  He’s played 15 to 25 minutes per game since Payne and then Dawson went down with injuries.  And he keeps knocking it down from deep; he’s still at 48% on three-pointers for the season.  He’s also started grabbing a few offensive boards and scoring a bit in the lane.  Overall, he’s still a pretty one-dimensional player, but it’s a dimension that can be a major factor in games.  With Payne back, Tom Izzo can now put a lineup out there where all five players are threats to shoot the three.

Denzel Valentine always seems like one of the more unique players in college basketball to me. His rebounding stands out, but offensive he seems to make just as many extraordinary plays as frustrating ones. How has his season gone?

His season has been a tough one to evaluate. Early in the year, he really cut down on the poor decisions with the ball that hurt him as a freshman.  As the season’s gone on, though, he’s been asked to be more of a playmaker on offense and that’s led to some poor decisions either with passes or taking long jumpers.  His offensive rating for the season now stands at a somewhat pedestrian 105.

He’s also been asked to do more on the glass, at times even playing the 4-spot for extended minutes.  And he’s come through very well in that area; he ranks 4th in the Big Ten in defensive rebounds per game in conference play.  So he continues to be a work in progress, but his versatility and willingness to force the action when the offense bogs down are major assets.

What are two keys to Sunday’s game?

For MSU, I think it’s transition defense.  As much as the Spartans have been very good scoring in transition this year, they’ve also had issues allowing opponents to score quickly going the other way.  That was one factor (another being MSU’s excessive fouling) in allowing Purdue to score nearly 1.2 points per possession last night.  I’m sure this will be a major point of emphasis by the coaching staffing going into Sunday.

The rebounding battle will, as always, be a key, too.  These teams are both perimeter-oriented.  If MSU can dominate the glass, that would be a major advantage against a team that can match its three-point shooting threats man for man.  (Three-point shooting percentage may the biggest key in this game, given that both teams are likely to launch a lot of shots from behind that, but that’s as impossible to predict as anything.)

The other interesting aspect of the match-up, as it usually it between a Beilein team and an Izzo team, will be what happens at the 4-spot.  Izzo will be able to go big there with Payne back, creating a mismatch against Glenn Robinson on offense but also creating one for Robinson going the other way.  Robinson will also get a chance to work against Kaminski quite abit.  Can he take advantage more consistently than he did in the first match-up between the teams?

Does the winner of Sunday’s game win the Big Ten? Outright?

MSU’s schedule is a bit tougher to close the regular season out, as they have to play Iowa at home and Ohio State on the road (although they do have the extra win in hand).  I’ll hedge my bets and say that if MSU wins, the two teams end up sharing the title, but if Michigan wins, they win the title outright.