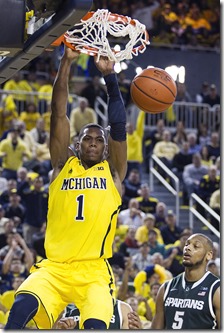 Draymond Green, Saginaw native and former Michigan State captain, was back in his home state on Monday. Green, playing for the Golden State Warriors, was facing off against the Detroit Pistons at the Palace of Auburn Hills. (Photo: Scott Mapes)

The Warriors easily dispatched the Pistons, but it wasn’t an entirely warm homecoming for Day-Day. After all, his alma mater had just lost the previous afternoon to Michigan in Ann Arbor, 79-70. The win completed a season sweep of the Spartans by the Wolverines and made Michigan 6-2 against Michigan State over the past eight games. Green was asked about Michigan possibly displacing Michigan State as the premiere basketball powerhouse in the state. Much of his answer smacked of bitterness, a player hurting for his former teammates. But one piece stood out.

Michigan fans, obviously aware that the Wolverines have hung a banner after each of the last two seasons, understandably have little patience for Green’s comments. But they should also know that particular comment was echoed — in spirit, if not in words — by Michigan coach John Beilein immediately after Michigan’s win over Michigan State on Sunday. Beilein was speaking on what more the program can strive for after winning a Big Ten championship two years ago and going to the national championship game last season.

“Consistency is the thing that Wisconsin, and Michigan State and Ohio State lately have been able to do,” Beilein said during his post-game press conference. “They haven’t had fall-offs. This is the Michigan goal right now. We have to stay competing for Big Ten championships going forward. Their kids don’t know what it’s like to not go to the NCAA tournament. That’s the mentality we want.”

So in a way, Green and Beilein share common ground. Green believes Michigan won’t be at Michigan State’s level until it hangs numerous banners over the course of decades; Beilein would like Michigan to hang banners consistently because he knows his competition, and the coach is nothing if not a competitor.

Michigan’s victory on Sunday was important for a few reasons, not the least of which being its significance regarding the Big Ten regular-season title. Going in, the stakes were high, and Michigan played like it. The win gave Michigan sole possession of first place in the conference and places them a half game ahead of the Spartans. With nothing but winnable games left on the schedule, Michigan controls its own destiny.

The win was important also because it’s an intrastate rivalry game between two schools that, whether their respective fan bases admit it or not, each measure themselves against the other. Winning six of the past eight matchups means something to Michigan, just as doing the same would mean something to Michigan State. It’s ignorant to suggest otherwise.

“It means a lot,” Glenn Robinson III said after the game. “Especially going into Michigan State last year and getting blown out. That wasn’t a great feeling. To be able to get the victory both times (we played them this season) means a lot to us, and especially our senior, Jordan Morgan. It was his last time playing Michigan State. We wanted to go out there and get the victory for him.”

That being said, it was clear the game meant more to the players as one of the final stops on their way to accomplishing their goal of a Big Ten championship. Just ask Nik Stauskas, who was almost dismissive of the rivalry with that larger goal in mind.

“It’s huge,” Stauskas said of the win. “Not just with the history, but with what we’re trying to achieve right now, being Big Ten Champions. We need this game and this one was important for us.”

That’s what you can count on with this team. No matter how big the win — whether it was winning at the Kohl Center for the first time since 1999, beating Michigan State at the Breslin Center to cap a grueling three-game stretch or winning on the road against Ohio State for the first time since 1993 — Michigan keeps its main goal in mind. This Michigan State team will go on the trash heap among the other casualties of Michigan’s march to the Big Ten title, should the Wolverines arrive at their destination come the end of the regular season.

The argument of which team owns the state is pointless. For the moment, Michigan has a stranglehold on the head-to-head matchups. But unlikely like minds John Beilein and Draymond Green agree that Michigan still has a few banners to hang if it wants to compete with Michigan State’s history. It could be on its way to doing just that with only a few more wins.

“It’s part of the formula. You have to beat Michigan State,” Beilein said. “I’ve been here for seven years. [Every year] Michigan State is in the mix (for the Big Ten championship).”