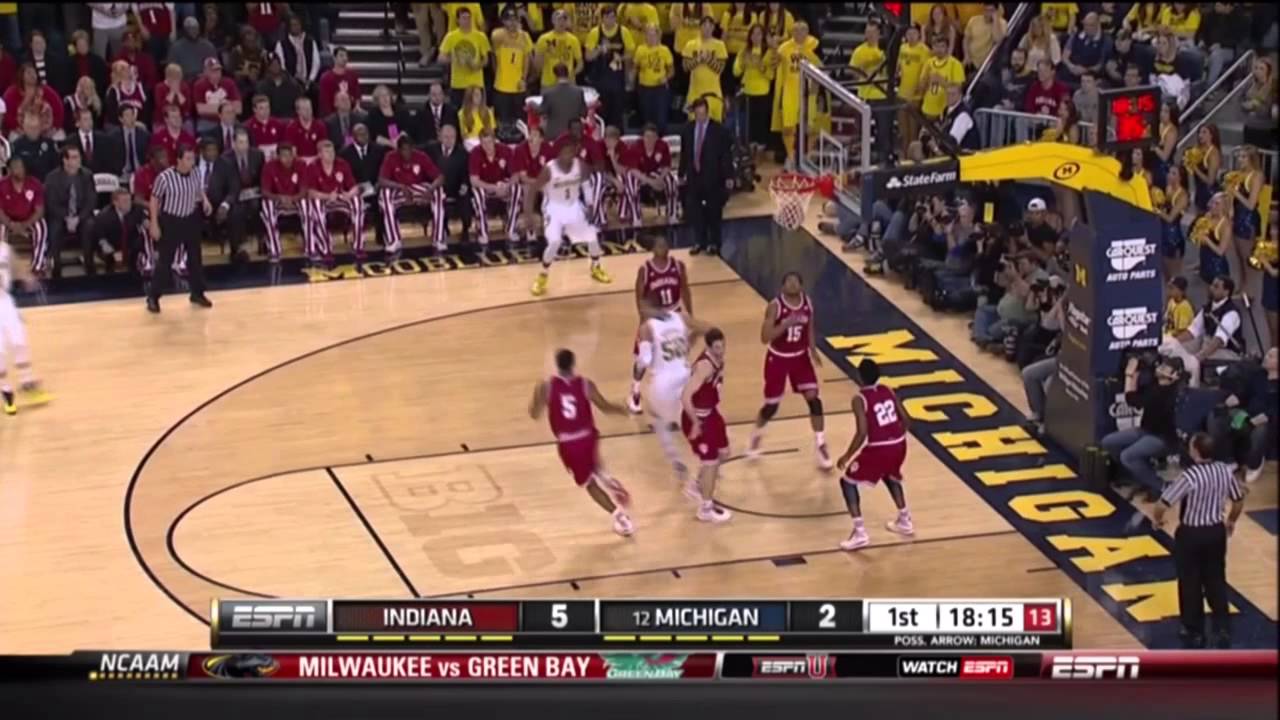 1) Jordan Morgan gets off to hot start

In Ann Arbor, Saturday night belonged to Jordan Morgan. After a teary pre-game ceremony with his parents, the redshirt senior started in his final game at the Crisler Center. He made it count. Morgan spoke after the game about not wanting the ceremony to last too long for fear of “getting all soft.” I don’t think he had anything to worry about, as Morgan kicked off the game by scoring Michigan’s first six points, all on tough inside baskets. These buckets were a combination of strong execution by Morgan and brilliant game planning by John Beilein. The coach knew Indiana would be switching every ball screen and playing small, which would mean lots of guards on Morgan off ball screen action.

“They came in, they started small and they were going to switch ball screens,” Beilein said. “It’s not as easy easy if you just try to throw it in there when there’s a mismatch, but he had small forwards on him, he had little guards on him and he just turned around and put it in. He used his pivots really well.”

Indiana’s strategy was to switch on the ball screens and collapse when Morgan got the ball in the post. It…didn’t work. On the first play, Yogi Ferrell switches onto Morgan, who scores easily on three flailing Hoosiers guards. On the next play, Morgan fights off a handsy Stanford Robinson with one arm while catching the ball with the other and finishes over Devin Davis. After two offensive rebounds, Morgan fights off Will Sheehey for the putback off a Glenn Robinson III miss. Finally, on what may have been his best move of the night, Morgan gets an offensive rebound of Nik Stauskas’s missed layup before making a nice fake to get Noah Vonleh off his feet. Morgan then takes a strong dribble to the rim and floats a hook over the star freshman. Morgan was terrific all night — he scored 15 points, grabbed 1o rebounds, notched two steals and blocked a shot.

2) Glenn Robinson III makes big plays in the first half

Mostly everyone’s performance on Saturday was overshadowed by Jordan Morgan, and no one’s complaining about that. But Glenn Robinson III quietly had one of his best games of the season scoring-wise against Indiana. After a veritable disappearance in Bloomington, Robinson got his revenge last night in the form of 20 points on 50 percent shooting from two-point range. Robinson showed off his full arsenal — drives to the basket, midrange pull-ups and tough floaters in the lane. Nearly midway through the first half, Michigan was down 10 points and took a timeout. Thereafter, Robinson was responsible for seven straight Michigan points that brought the Wolverines within five. I don’t know whether or not Robinson’s cut on the first play was part of a set — likely it was an option based on a read. Either way, it was a great cut with Spike Albrecht driving baseline against the 2-3 zone, and an even better hanging finish over Noah Vonleh in the paint. Later, Robinson makes another great read, this time as the passer. The sophomore drives to the basket early in the shot clock, but when he’s beset by two Hoosiers he spies Zak Irvin wide open on the wing and fires the ball to him cross-court. Irvin buries the three, his only make on the night. Finally, we see a shot Robinson has hit again and again this season — the long two near the free throw line. Coming off an off-ball screen by Horford, Robinson receives the pass, rises up confidently and hits the shot over the outstretched arm of Will Sheehey.

Indiana led by six points at halftime, thanks largely to shooting the lights out and not turning the ball over — two anomalies in the contest of the Hoosiers’ season to date. In the second half, Indiana did not regress to the mean as far as shooting goes. But turnovers? The Hoosiers more than made up for their lack in the first half. Much of their turnovers were forced by Michigan sticking with the 1-3-1 zone for most of the second half.

“It’s not the longest (I’ve run the 1-3-1 in a game) since I’ve been here at Michigan. I think we played Duke here and we played it a whole game one time,” John Beilein said after the game. “But it’s the longest in a while. Similar to probably Florida State this year. We just couldn’t stay in front of them. They’re quick and they have a good plan and given the new way the game is called, it was our only recourse. We couldn’t stay in front of them. We did play man-to-man when we had to, but at the same time, that was the only way I thought at that time we’d win the game.”

There are quite a few possessions in this clip. On the first, Jordan Morgan plays excellent defense as Stanford Robinson attempts to draw contact — later, Morgan is rewarded on the other end when Indiana completely loses track of him in the post. Morgan was terrific in the 1-3-1, stepping up in the middle to stop Yogi Ferrell drive attempts. This is what happened on the second play, and Ferrell turned it over when he was stopped. Morgan again makes it count on the offensive end, cashing the and-1 layup after a dubious foul call. On the final two plays, Caris LeVert shows why he is the perfect point man for his role on this defense, stealing two passes at the top of the key and converting them into points.

This late run by Indiana ensured Michigan would have a close game on its hands through the final buzzer. After two Spike Albrecht free throws, Michigan was up 11 points and looking like it was going to run away with this one. The Hoosiers had other plans. They did what had been working all night — attack the basket and let Yogi Ferrell knock down the occasional 3-pointer. On the first play, Indiana expertly attacks the 1-3-1. Ferrell drives and Noah Vonleh basically screens Derrick Walton, who is Michigan’s baseline defender. This leaves the baseline wide open for Troy Williams, who slams home the dunk. This was an effective play to beat the zone, and Michigan’s help arrives too late to stop the basket. After a pull-up three by Ferrell, Stanford Robinson comes streaking down the court with the ball and gets fouled on the fast break layup. Finally, Devin Davis grabs the rebound off the Noah Vonleh miss from beyond the arc and hits a tough hook shot. By the time this run was over, Indiana was within two points and Michigan needed a timeout to regroup.

While Michigan needed some good free throw shooting down the stretch and Indiana threatened until the end, this 3-pointer effectively sealed the game for the Wolverines. Michigan had been attacking the basket throughout the second half, which was undoubtedly on Indiana’s mind when Nik Stauskas had the ball at the top of the key with the game tied. Stauskas drives on Yogi Ferrell and quickly draws the help from Devin Davis. The sophomore kicks it out to Robinson, who rises and fires and hits.

“If you know how many times he practices that right corner jumpshot — he burns a lot, he goes back door a lot, but that was one, I mean, as soon as it left his hands I knew it was in,” John Beilein said of Robinson’s shot after the game. “Because we shoot extra together, he shoots a lot on his own, he’s worked really hard at getting his shot so he follows through the whole way. That was textbook. It couldn’t have happened to a better kid.”