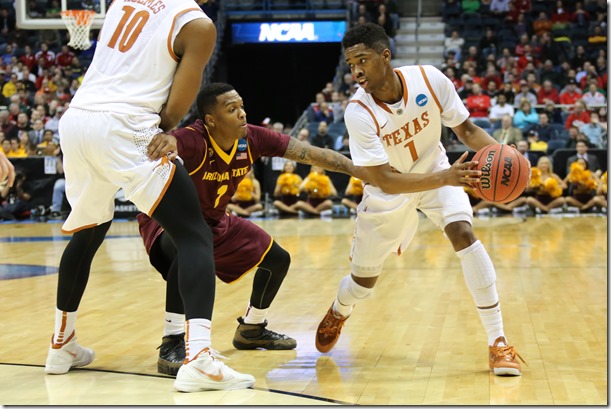 Early in the season, Walton lost those head-to-head battles with experienced lead guards consistently. He would show flashes of brilliance, but never the consistency to finish big games. Michigan limped to a 6-4 record and Walton struggled badly in three of its four losses.

Walton has grown as a player every game and the wins have started to follow. He’s been making key plays in big games, even on the road at Nebraska, Michigan State and Ohio State. He’s steadily developed into a player that Michigan can count on in crunch time.

The one thing that Walton hasn’t faced this season is another freshman point guard. After cutting his teeth against the best of the best, Walton has almost only been paired against veterans. In the round of 32 against Texas, Walton will finally battle someone his own age.

The change of competition will be a welcome sight for Texas point guard Isaiah Taylor as well. Like Walton, Taylor has had some ups and downs as a freshman point guard, but he’s started every game for the Longhorns. Taylor was named to the All-Big 12 Freshman team and was recently ranked seventh in ESPN’s top freshmen poll.

Taylor has a 285 pound big man to shoulder the load on the interior. He has an All-Big 12 defensive player flanking him in the backcourt and another down low. He’s key to the Longhorn offense, but he has support. Walton has his guys behind him too. Nik Stauskas and Caris LeVert will be the focus of Texas’ defensive game plan. Even Taylor focused on Michigan’s wings in his assessment of the Wolverines, “from their two to their four, they can shoot the ball, and anybody can lead the break.”

Nik Stauskas, Caris LeVert, Cameron Ridley and Jonathan Holmes are the stars of the game, but Walton and Taylor might be the most important players on the floor. In a game where style of play will matter as much as anything else, the point guard that controls the game will have the upper hand.

Walton’s shooting ability is a spark, but his ability to rebound and push the ball will be most critical. Standing just 6-foot, Walton is a surprisingly good rebounder. He grabbed double-digit rebounds in a game at Ohio State this season and allows the Wolverines’ big men to concentrate on boxing out while he cleans up the mess. Against a dominant offensive rebounding team like Texas, Michigan needs Walton not just to grab rebounds, but make the Longhorns pay in transition.

Taylor has the ability to change the game in a different way. His ability to slash his way into the lane conjures nightmares of Keith Appling slicing through Michigan’s defense in Indianapolis last weekend.

“[They are] similar to Michigan State, a few guys that can really get out and fly and finish at the basket,” Taylor explained. “A few guys that can shoot the ball really well. I’d compliment their guards on their quickness.”

Taylor isn’t the best shooter, but at times a miss from the 6-foot-1 freshman can be the best offense for a lackluster Texas attack. His penetration can draw in a defending big man, leaving Cameron Ridley and Jonathan Holmes wide open to clean up the miss with an easy put-back. Michigan has struggled defensively this season, especially against quick guards, and Walton will have his hands full for the second consecutive game.

Taylor is worried about Michigan’s ball screen action – something not unique to Walton, but an area that Texas could be vulnerable.

“I think we just want to play the pick and roll better,” he said. “Getting over or under the screens, how we play it and just stay in front of the ball and not let the guards and the wings, that they have an opportunity to kick it out for people to hit shots.”

Walton and Taylor are both extremely quick, but they have very different games. Walton is the more efficient player with the better jumpshot, but Taylor has been more productive. Walton is averaging 8.1 points and 2.9 assists per game while Taylor checks in at 12.4 points and four assists. Taylor has made just five threes on 19 attempts while Walton is 38-of-94 from long distance.

Beilein emphasized that any freshman guard who earns his coach’s trust is a great player — regardless of their stats.

“When a coach gives the ball to a freshman and gives them that trust, forget about how they play in games, they must see things in practice, the intangibles that lead to success,” Beilein said. “They must be young men that go to class.  They must be young men that have good work habits, that earn that.  No coach is going to ever give that ball to a guy who hasn’t earned it.”

Both John Beilein and Rick Barnes have been all in with their freshman guards since day one, now it’s time to see which gamble pays off.