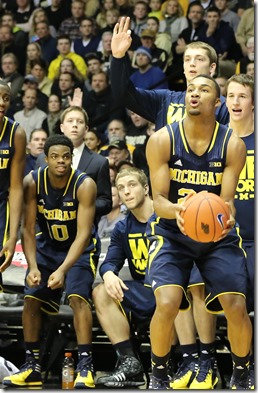 Throughout this past season, Michigan was playing with its own version of the “big three” on offense: Nik Stauskas, Glenn Robinson III and Caris LeVert. Those three were on the floor together most of the time at the two, three and four spots and they used two-thirds of Michigan’s offensive possessions. (Photo: Dustin Johnston)

With the possibility of Nik Stauskas, Glenn Robinson III and Mitch McGary leaving for the NBA next year, Caris LeVert could be the only Wolverine from that group likely to return. John Beilein likes to mention all of the shots that Trey Burke and Tim Hardaway Jr. left up for grabs this year — Stauskas and Robinson would leave over 600 shots for whomever wants them next season if they opt to go to the NBA.

LeVert will undoubtedly be a focal point of the offense in the likely event that he stays in school (Beilein didn’t comment on whether LeVert had put his name in for evaluation). But that still leaves plenty of space for the emergence of Derrick Walton and Zak Irvin. Speaking on Walton, Beilein said he could see running more of the offense through him.

“I think he’s a guy who we can play through more than we did this year,” Beilein said during his Wednesday press conference. “Obviously Nik, Caris and Glenn we played through more this year … That’s something Derrick’s going to want to do. I sense that Zak Irvin as well is going to be a guy that’s going to make major steps this year.”

Michigan’s two freshmen had very different roles on the court this past season. Walton was the freshman point guard, feeling his way out in a new system. By Big Ten play he was knocking down game-winning layups, but he never really took charge of the offense as many Michigan points guards have in the past. That wasn’t his role. However, he exhibited tons of potential, with great shooting and a nose for the ball.

What will be interesting to see is if either player will elect to stick around Ann Arbor for the spring or summer session and take part in “Camps Sanderson,” the weight training program led by Michigan’s strength and conditioning coach, John Sanderson. Last summer, Stauskas and LeVert both took part in the program and the improvements were obvious.

“There’s been a major push from guys who want to be here the whole summer, Beilein said. “I expect many of our guys will be there. But I don’t have all the numbers. We’re not saying we want people to come back for both summer sessions. We definitely want them for one. … All I know is it really paid off for Caris and Nik. But it was their choice to do that, and that’s what’s important.”

Another player who could have a major impact next season is Mark Donnal. Donnal redshirted this past year as a freshman but should be ready to make an impact next fall. Donnal was a consensus 4-star coming out of high school and ranked 86th in his class according to 247 composite rankings.

The Toledo native needed to bulk up a bit in order to play as a big man at the college level, but in high school he was known for his smarts, his footwork in the post and his shooting ability. It has become apparent during his redshirt season that the freshman is more athletic than expected.

“Mark is still 18 years old right now. So that is very encouraging to us,” Beilein said. “Every day when our guys were out shooting around, he was finishing a mammoth lift with John Sanderson in the weight room. Mark will take coaching and move it right away. When in doubt, he shoots it — and it goes in.”

Donnal’s playing time next year will rely heavily on Mitch McGary’s decision whether or not to remain in school. The center is currently sitting in the early to mid-second round of the NBA draft by most projections. Regardless of whether or not McGary stays, the frontcourt situation will be enticing. With Donnal available, Jon Horford sticking around for his redshirt senior season and Ricky Doyle and DJ Wilson entering the program as freshmen, there could be a logjam.

If McGary stays, it gets even more crowded. One of Doyle or Wilson could be redshirt candidates in the front court and it’s likely Donnal’s shooting ability will force the coaching staff to give him some tick no matter who’s in front of him.

“He’s got great instincts, as he learns other parts of the game,” Beilein said. “Depending right now on a lot of different things, he might have an opportunity to play next year. We’ll have to wait and see how it all shakes out. And I expect if he is there, everyone in this room, over time, will really like what he brings to this program.”