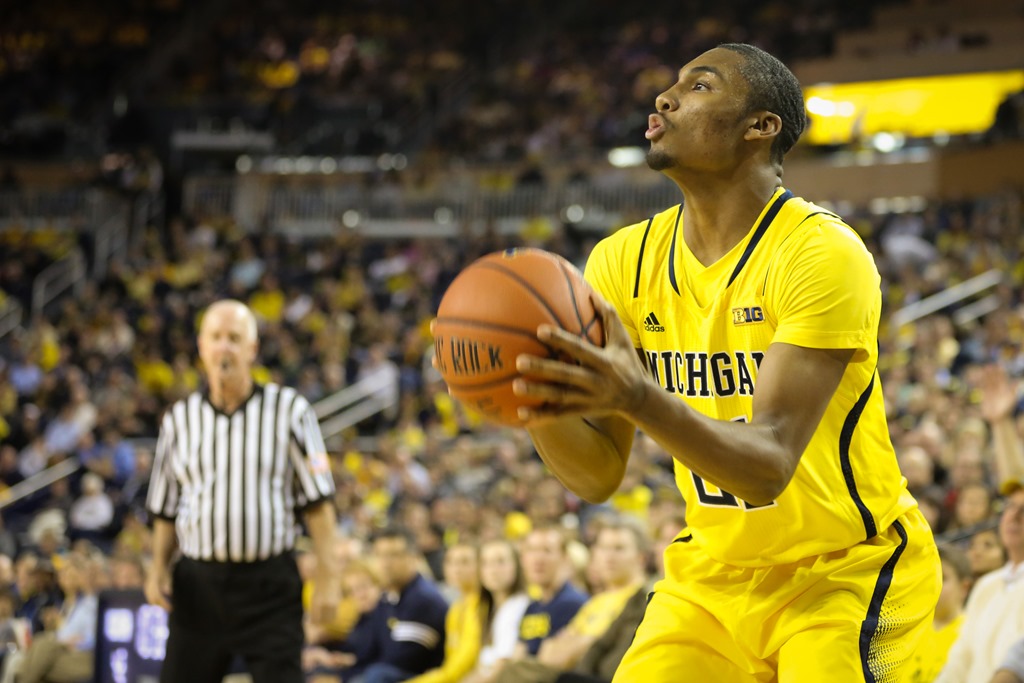 In the past three seasons, Michigan has sent five players to the NBA Draft before their eligibility expired and graduated three four-year starters. The Wolverines have also lost a handful of transfers.

As a result, Michigan has had the youngest team in the Big Ten for the past two seasons and could be even younger this season. The Wolverines have also had the best offense in the country for two years running and have won more Big Ten games than any other league team during that span. The Wolverines haven’t rebuilt, they’ve simply reloaded.

The two-step formula has been simple: recruit talent and rely on dramatic off-season improvement.

Michigan players have made a habit of making a dramatic leap during their first offseasons with the program and the result has usually been a seven-digit salary in the NBA. If the Wolverines are going to continue their success next season, two sophomores will have to make comparable leaps: Derrick Walton and Zak Irvin. (Photo: Dustin Johnston)

Walton and Irvin both had very good freshman seasons. Walton was a starter from day 1 and earned a spot on the Big Ten All-Freshman team while Irvin served the role of designated sniper to the tune of 62 made three-pointers. But neither player was a star.

Walton rarely dominated games – although he made critical plays in several key Big Ten road games – and Irvin was remarkably one dimensional for a player that had five stars plastered next to his name by the time he graduated high school. Both had the luxury of allowing Nik Stauskas, Glenn Robinson III and Caris LeVert to demand attention from opposing defenses.

Now they have the perhaps unfair expectation of living up to their predecessors and turning into superstars during their second season. John Beilein didn’t do much to dissuade that level of expectation when he met with the media on Tuesday afternoon.

“I really think so,” Beilein replied when asked if Zak Irvin could make a similar jump to Nik Stauskas. “The culture that’s been set here is we work really hard in the offseason. There’s no other culture right now. If you aren’t into that culture, your teammates are not going to allow it. Just working them out right now, they have been putting great work in for these last few weeks.”

“With Zak, the development piece will be similar with what we saw with Glenn, what we’ve seen with Tim,” Meyer said in a recent radio interview on WTKA. “ He was working with Val on his ball-handling skills last week, the ability to improve his ball handling so that he can not only use the perimeter jumper as an offensive weapon but be able to keep balance in attacking the rim, using ball screens and finding some success in his mid-range game.  The thing about Zak is he a little bit like Tim, he is a competitor, and we know that he is going to prepare himself for that moment, because that is just who he is.”

Everything comes back to culture. Building a winning culture is something that Beilein has stressed since he arrived in Ann Arbor and it’s the reason why he isn’t as worried about having yet another young team as he might have been five or six years ago.

The internet is littered with old references of Beilein hoping to establish a culture. As recently as this March (“You gotta build a culture that is really conducive to them playing unselfish basketball, willing to work hard every day in practice, build a chemistry within the team. “) to his first NCAA tournament appearance with Michigan in Kansas City in 2009 (“We didn’t invent the game. This is what worked in the past. This is how we’re going to play. Gradually everybody sort of adapted to it.”), or at Big Ten Media Day in 2012 (“If you establish the culture and get the right breaks here and there, anything can happen.”).

Beilein has preached it since he stepped foot in Ann Arbor and now after three of the most successful seasons in his career, he’s pretty sure that he’s built it.

“It’s not starting over, but the foundation is there now,” he said. “Putting the bricks back in is not going to be as hard as it was seven years ago, but there’ll be another building point for us, which is good. You reexamine so many things.”

More than any position on the floor, the point guard is the most critical building block. Derrick Walton was good last year, but Michigan needs him to be great this year. That progression will start with expanding his shooting range.

“We just had a workout with him,” Beilein said. “(We’re working on) range on his jump shot. When he first came here, he would have toes on the line all the time in practice, and getting range, that was something that separated Trey Burke, separated Nik, Tim, they could shoot from really deep range. He just shot really well just now. Getting stronger, he just had his 19th birthday. He’s really young.”

Walton shot 41% on three-point attempts last season, but Beilein is correct that he rarely stretched the defense. Michigan assistant coach Jeff Meyer is ready for Walton to take ownership of the program and the offense.

“So moving forward, his ability to take ownership, to pass out directions if you will.  Obviously, we want him to expand his skill set,” Michigan assistant coach Jeff Meyer said during a radio interview in mid-May on WTKA. “We’ve already been in the gym as Val just mentioned on expanding his range.  That’s going to be huge for him because he does have with the ball really good skills, he has the abilities to explode by people, but his challenge will be to give himself more space with his ability to make shots.”

Caris LeVert is going to be the go-to scorer of next year’s team. The Wolverines will rely on a handful of freshmen, redshirts and inexperienced players to carry the torch in the front court. But Michigan’s ceiling depends on its sophomores ability to make the leap that has become expected under John Beilein. If they make that jump, the rest might just take care of itself.