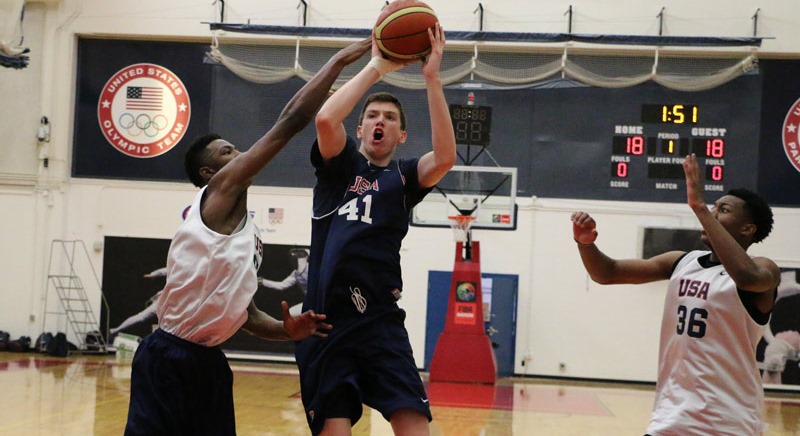 USA Basketball announced 17 finalists for the USA Basketball U17 team on Saturday and five-star forward T.J. Leaf was lucky enough to make the first cut.

Despite playing high profile AAU basketball for years, Leaf admitted that the competition level at USA Training Camp is some of the best that he’s faced.

“It’s definitely better, it’s kind of the best of the best and everyone’s competition to make the team so it raises the intensity a lot as well,” Leaf said by phone on Saturday. “So it’s definitely more competitive (than anything else this summer).”

Don’t expect the competition to slow down. Leaf made the cut to 17, but a final cut to 12 is expected early this week. The final selected team will practice in Colorado until August 1st before traveling to Doha, Qatar for additional practice and Dubai for the U17 World Championships, which begin on August 8th.

“To represent all of the USA from our age group would be a great honor,” Leaf said. “It’s already just a blessing being here.”

Leaf’s summer has been busy, but he’s been focusing on rounding out his already diverse game. Leaf stands 6-foot-10, but continues to develop into a player that can play inside and out. Throughout a grueling summer, Leaf has learned to be more consistent on a day-to-day basis.

“(I’ve learned) just to play hard every game,” Leaf said. “Sometimes maybe your shot won’t be falling or you won’t have legs that day, but if you just play hard then you can make up for it in other aspects of the game.”

Despite the height and length to play inside, Leaf’s game continues to blossom on the perimeter.

“My jumpshot is a lot more consistent now,” he said. “It used to be kind of streaky but I think it’s very consistent now, also my wing skills (have improved). I’ve really developed into more of a wing and a post at the same time so I can play multiple positions.”

Leaf’s strong play has earned him plenty of recruiting interest from across the country as well. When we spoke with Leaf in May, he was primarily hearing from Michigan, Indiana, UCLA and Arizona. Now that list has grown considerably. Duke was the most recent school to extend a scholarship. We spoke to Leaf before the Duke offer on Saturday, but he discussed his first conversation with coach Krzyzewski with Krossover’s Dan Poneman.

“Coach K, I mean, he’s like probably one of the biggest names out there in coaching,” Leaf told Poneman. “He’s a hall of fame coach, he coaches the USA team…[when we spoke] I was like ‘Dang, I just talked to Coach K.’”

Despite the new recruiting attention, Michigan has prioritized Leaf as effectively as anyone.

“Michigan is still coming at me the hardest if not the hardest of everyone,” Leaf said. “Indiana, UCLA, Arizona, Arizona State, Texas, Florida, Duke and Louisville (have also been recruiting me hard).”

Leaf hopes that his August plans feature a trip to the Middle East, but his next visits on the docket are to Arizona and Arizona State. Michigan head coach John Beilein and LaVall Jordan have been Leaf’s primary recruiters and they’ve established a solid rapport after Leaf’s second unofficial visit to Ann Arbor in May.

“It was great,” Leaf said of the visit. “It was great to meet the coaching staff and just talk and then to go around campus and see all of the facilities they have there.

“I think I have a great relationship with both (Coach Beilein and Coach Jordan) and I feel comfortable with both of them and I love the way they run the program there.”

Michigan stands out in Leaf’s recruitment because of the way that John Beilein and his staff develop and use their players, specifically big men with perimeter skills.

“They have a great reputation of developing players and when they get there they should be good, but when they leave they are well developed and they gain a lot of areas of their game,” Leaf said. “I love them because they play a lot of people in multiple positions like me and they run the ball a lot.”