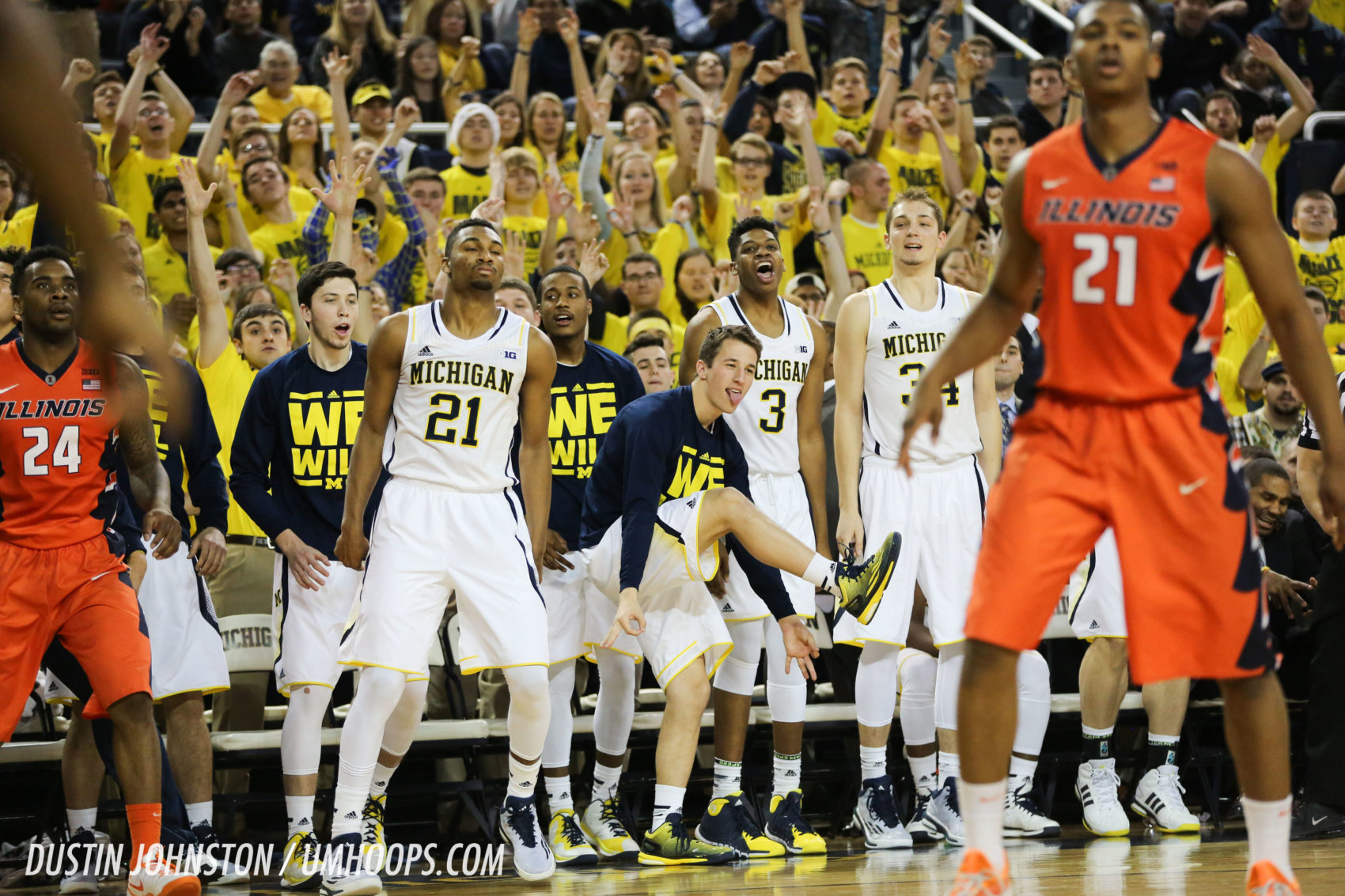 John Beilein discussed the challenges involved with stopping Wisconsin’s offense while updating the injury report ahead of Saturday’s ESPN GameDay clash against the Badgers. Andrew Dakich also discussed the decision to burn his redshirt and enter the game at Rutgers on Tuesday.

The biggest challenge the Wolverines will face comes from preseason All-American Frank Kaminsky, who is averaging 17 points, eight rebounds and two blocks per game. The 7-foot center can post up, and he stretches defense by hitting 40.4% of his three-pointers.

“We have a game plan we’re going to try to use against him, and we’ll see if it will work.”

The good news for Michigan is Ricky Doyle, perhaps the best option to defend Kaminsky inside, practiced at full-speed Thursday after suffering from an illness during the past two games.

Still, as Beilein noted, simply stopping Kaminsky isn’t enough. Even if they shot down the center, the Badgers can attack Michigan from “everywhere.”

“Dekker is as good of a player as there is in the league,” Beilein said, who proceeded to mention the other three players in Wisconsin’s starting rotation. “Those five out there, you put those five stacked up against anyone in the country, they’re as good as anybody despite losing Jackson.

“You can’t say, ‘We’re going to shut him down,’ because somebody else will get it done.”

The Wolverines will have to play a near-perfect game to pull off the upset, and Beilein seems to know it.

After dressing just 11 players against Rutgers — several of whom weren’t fully healthy — nearly everyone practiced at or close to 100% on Thursday.

The only player besides Caris LeVert who didn’t participate completely was Derrick Walton, who is still suffering from a turf-toe injury that has limited since November.

“The toe, foot hurts a little bit,” Beilein said. “We’re trying to manage him through this.”

Everyone else — from Ricky Doyle to Kameron Chatman to Duncan Robinson — were full-go. Even DJ Wilson practiced fully for the first time since spraining his knee, though the freshman center is still expected to redshirt.

While Albrecht is dealing with an unspecified lower-body injury, Thursday’s practice was “the best he’s been in a long time,” according to Beilein. The coach said Albrecht went 20 to 30 minutes without missing a shot.

Andrew Dakich burned his redshirt for four minutes of playing time against Rutgers, but expect to see more of him in the future.

Beilein said he wants to get the sophomore and Sean Lonergan in every game, if possible, because the talent disparity between the former walk-ons and the Wolverines’ freshmen isn’t that large.

Dakich said he had no regrets about playing against the Scarlet Knights.

“It was kind of like a dream come true,” he said. “My plan, ever since I got here, was to play for the University of Michigan. It was a great opportunity for me.”

The sophomore said it’s too early to decide about redshirting next year and that he hopes to coach after graduating.

“My goal is not to leave the University of Michigan,” Dakich said. “Coach Beilein was a guy I’ve always admired. I wanted to get into coaching afterward, so there’s not a better way [than] being in a system like his.”

As for who leads the Bench Mob if Dakich is playing?

“That’s a great question,” he laughed.