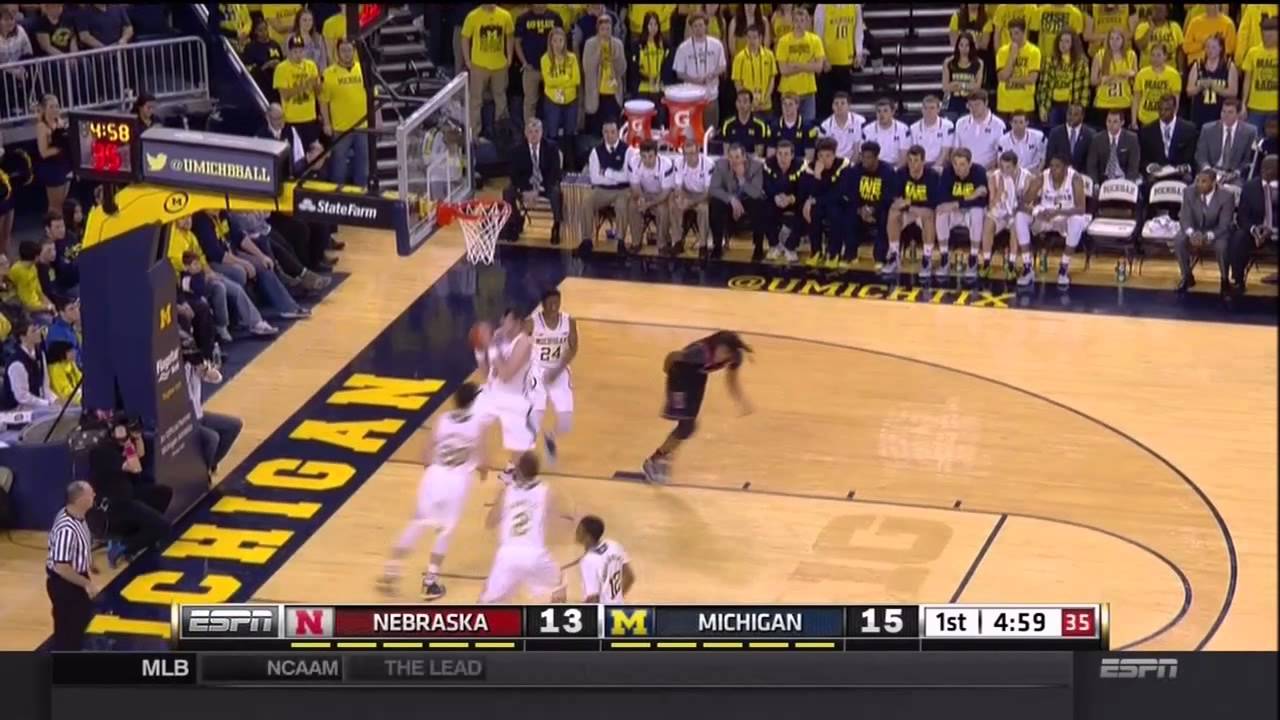 The Michigan basketball team toppled Nebraska, 58-44, on Tuesday night. How did such a young and injured squad earn the Wolverines’ first double-digit conference win of the year? We take a look in Five Key Plays.

The Michigan basketball team toppled Nebraska, 58-44, on Tuesday night. How did such a young and injured squad earn the Wolverines’ first double-digit conference win of the year? We take a look in Five Key Plays.

1) Aubrey Dawkins paces Michigan in the first half

Though Aubrey Dawkins didn’t score after halftime, he was the biggest highlight in an otherwise forgettable first half for both teams. In just his third start, the freshman paced the Wolverines with 13 points in 16 minutes, leading them to a a 23-18 lead at the break.

His first bucket was a straightaway three created by a Ricky Doyle screen. Dawkins scored all his points in catch-and-shoot fashion, but Michigan ran ran multiple sets designed to get him those looks. Five minutes into the game, he curled from the left wing to the right elbow, getting separation from Shavon Shields thanks to a screen just inside the top of the key. He would score from the left elbow nine minutes later, this time on a Doyle pick and a pass from Spike Albrecht. Had Walter Pitchford contested the shot, Dawkins could’ve hit Doyle rolling to the basket.

After a Nebraska miss with five minutes left in the half, Albrecht and Doyle ran a quick pick-and-roll at the top of the key. Both defenders stayed with the guard, forcing David Rivers to step toward Doyle inside. Albrecht recognized that and found Dawkins in the corner, and he buried the three.

Dawkins finished his impressive first half with a deep trey, simply hitting from a couple feet beyond the arc despite a defender in his face.

Before Tuesday, Terran Petteway and Shields were combining for 63% of Nebraska’s offensive possessions, the highest total usage by a duo in the Big Ten.

Keeping half of that pair scoreless for an entire half proved to be crucial, as Michigan kept the Cornhuskers at bay before taking over after halftime.

Petteway got the ball on Nebraska’s first possession, backing down Albrecht from the short corner. But the guard bodied him well — the threat of a Doyle doubleteam surely helped — and Petteway settled for a fadeaway jumper, which he missed.

The junior wing missed his next three shots, which were all three-pointers. The first was an open look created via good ball movement through the 2-3 zone, and he later seemed to push off Max Bielfeldt to create space for another attempt. (The refs had called that against Petteway less than a minute before.)

Petteway went 0-for-6 from the field in the first half, and, while he finished with seven points, it was on 1-for-11 shooting. It seemed as if the wing would eventually heat up and take over the game, but it just never happened.

“For some reason, Petteway had a bad game again, just like last year, and we were very fortunate to get a win because of that,” Beilein said.

Earlier this season, Beilein expressed his frustration with Michigan’s transition offense. Tuesday, Muhammad-Ali Abdur-Rahkman ensured the Wolverines had no issues scoring on the break.

Dawkins blocked Benny Parker on the first possession after halftime, and Abdur-Rahkman went coast-to-coast for a layup, using speed his coach later raved about. Then, Albrecht delivered a lob to Doyle in the paint for a dunk; the center was free because Pitchford switched onto Albrecht, while Pettway didn’t switch off him. This was a great adjustment out of halftime to make adjustments to Nebraska’s pick and roll defense in the first half.

Nebraska switched to a 2-3 zone, but the Wolverines attacked it perfectly. Zak Irvin got to the weak spot at the free-throw line, Albrecht delivered a quick bounce pass, and the forward hit the turnaround jumper to push the lead to nine.

Then Abdur-Rahkman scored in transition again, but this time, he created the opportunity himself by poking the ball away from Shields. The freshman received a pass at the three-point line, attacked the basket and laid the ball in off the glass.

“I feel like I’m more comfortable with the defense and physicality of the game to just drive to the basket now,” Abdur-Rahkman said.

His transition buckets keyed a 15-2 run, which put Michigan up 18 with 15 minutes to play.

4) Abdur-Rahkman goes off the high glass with the foul

Abdur-Rahkman led the Wolverines in free-throw attempts during their trip to Italy over the summer, indicating just how adept the freshman is at attacking the basket.

In this sequence, Nebraska couldn’t stop him either.

The play itself wasn’t anything special. Abdur-Rahkman got the ball on the right wing with Parker bodying him. The guard peeled around his defender anyway to get into the paint, then fired a tough floater through contact from Moses Abraham.

The shot hit off the back of the rim and took a friendly bounce, falling though. He followed with the free throw, and, after a turnover, another transition layup to increase the lead to 16.

“I just saw some open slots,” Abdur-Rahkman said. “Coach pointed out some places where we could drive to the basket. We just tried to attack that.”

The Cornhuskers had whittled their deficit to 10 with four minutes left — within striking distance. But Irvin made a pair of big plays to secure the win.

The sequence began with a set that seemed designed to get Irvin a look from deep. The guard cut inside from the right wing, then popped out to the top of the key. But Petteway contested it well, so Irvin drove to the high block, where he made a jumper through contact and then added the free throw.

This was a big time shot for Irvin, even if he might have missed the shot had he not been fouled, and it was the sort of smart, heads up offensive play that the coaches have been looking for Irvin to make.

On the defensive end, Irvin intercepted a baseline pass from Parker. The Wolverines ran the shot clock down on the ensuing possession, but Albrecht got to the baseline and seemed prepared to fire his customary pass to Irvin in the corner for a three. Instead, he dropped a no-look bounce pass to Bielfeldt in the paint — surprising Nebraska and every fan at the Crisler Center — for an easy dunk.

That put Michigan up 15 with three minutes left, and the Cornhuskers never cut that deficit, going scoreless until Tarin Smith made a free throw with seven seconds left.