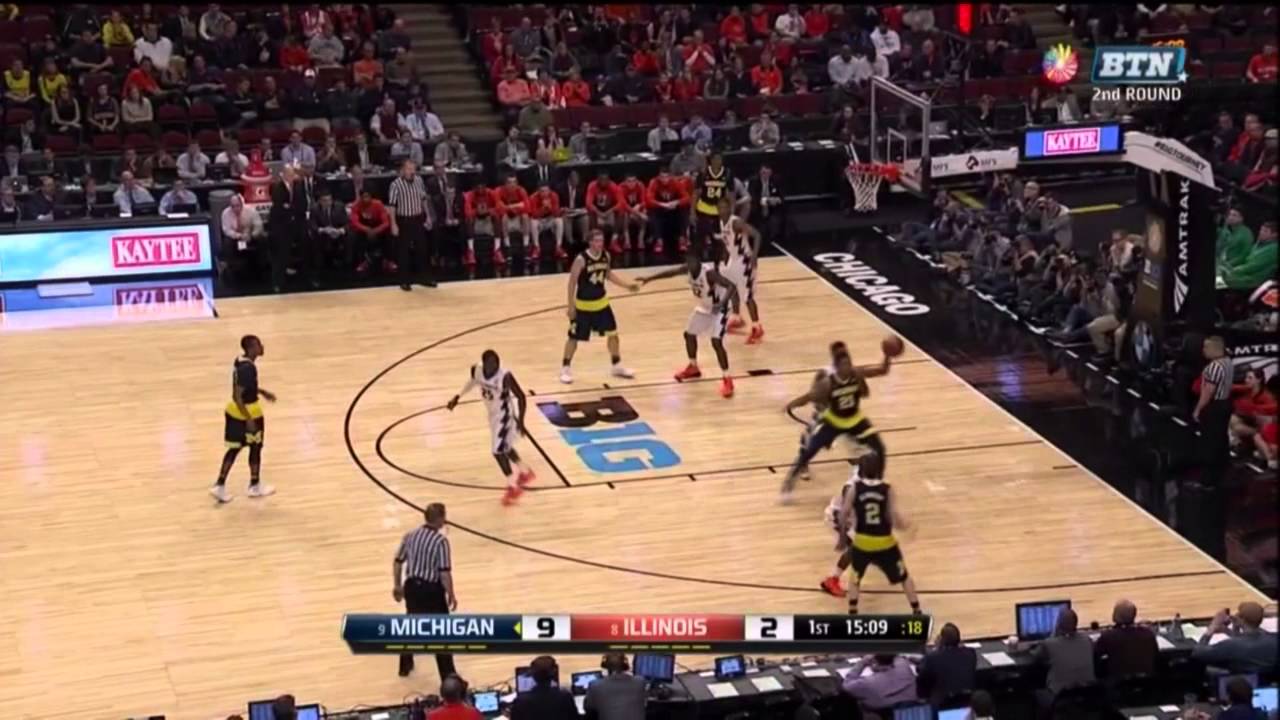 Michigan cruised to a 73-55 win over Illinois on Thursday afternoon, dominating in virtually every facet to secure a berth in the third round of the Big Ten tournament. In Five Key Plays, we look at the biggest moments of the 18-point blowout, which again showcased the Wolverines’ improvements this season.

Michigan cruised to a 73-55 win over Illinois on Thursday afternoon, dominating in virtually every facet to secure a berth in the third round of the Big Ten tournament. In Five Key Plays, we look at the biggest moments of the 18-point blowout, which again showcased the Wolverines’ improvements this season.

Michigan got off to a quick 14-2 start against the Illini and Muhammad-Ali Abdur-Rahkman was a big reason why.

The 6-foot-3 guard started this sequence with a nice 18 foot jumper off the pick and roll, a shot that has been one of his go-to moves late this season. His next make came from three-point range as Zak Irvin got into the lane and kicked the ball to Spike Albrecht, who then made the smart extra pass to Abdur-Rahkman for the open three.

The Allentown native followed that up with another vintage move. This time he corralled a rebound and pushed the ball himself. Illinois didn’t stop the ball and Abdur-Rahkman went all the way to the basket where he finished over Nnanna Egwu.

“Just being more aggressive,” Abdur-Rahkman said after the game when asked about his strong take to the rim. “Not being passive and let them get up in you in defense, and I was just being aggressive from the start.”

In a familiar script, Michigan was in the midst of a scoring drought and had just blown a big lead. Illinois was on a 13-0 run and, at the time, looked like it was ready to seize control of the game. The Wolverines have struggled to get out of scoring droughts all season, but this time Spike Albrecht came to their rescue.

Once again, it was Zak Irvin that created the action as he drew two Illinois defenders on the high pick and roll. Irvin was  almost trapped on the side of the floor, but managed to reverse the ball to Albrecht, who had space on the opposite wing. Albrecht went with a shot fake before stepping into arguably the most important Michigan make of the game.

The 1-3-1 zone seemed to cost Michigan the game at Illinois, but this time it worked to perfection. This run was triggered by three consecutive defensive stops in the 1-3-1 zone that led to easy offense for Michigan.

First, Michigan gets the ball up the court quickly as Spike Albrecht swings it to Zak Irvin. Irvin makes the quick pass to the corner to Aubrey Dawkins, who fires up a three just six seconds into the shot clock. Michigan’s transition three-point game was a lethal weapon in previous seasons, but has been seldom used this year.

On the next possession, Irvin gets into the lane using a ball screen from Max Bielfeldt and throws an alley-oop to Aubrey Dawkins cutting along the baseline. Dawkins throws down the easy alley-oop, but this is another example of a staple of Michigan’s offense in recent seasons that we’ve rarely seen this year.

Michigan attacks quickly again on the next play as Albrecht weaves his way into the lane and draws four defenders before kicking to Dawkins for another three, this one stretching the lead to 10 points. This one is a shot that Dawkins might not even take a couple months ago, but with his improved release he’s able to get up with no problem.

4. Albrecht takes over late in the first half

As John Beilein would explain after the game, the coach was very impressed by the way his team responded to Illinois’ 13-0 run, which gave the Illini a brief lead in the first half. The Wolverines went on a 23-4 run of their own in the final eight minutes of the half, and Albrecht was a crucial contributor during that streak. Three big moments in quick succession helped Michigan to a 17-point lead at the break.

With three minutes remaining in the half, Leron Black was assessed a technical foul for complaining after Muhammad-Ali Abdur-Rahkman drew a charge. Albrecht made both free throws to push Michigan’s advantage to double-digits, and he followed with a three-pointer on the ensuing possession.

The trey was created through good ball movement from the Wolverines, beginning with an easy lane to the basket for Mark Donnal when Nnanna Egwu moved out of position in anticipation of a return feed to Zak Irvin. Instead, Donnal drove to the post, where he delivered a kickout pass to Aubrey Dawkins in the corner, and the ball eventually got to Albrecht several feet beyond the top of the key. At that spot on the court, you can’t fault Rayvonte Rice for giving Albrecht some space, but the junior guard pulled up anyway and knocked down the shot.

Then, Albrecht drew a charge on Jaylon Tate, and Irvin fired a jump pass to Donnal — who was getting extended time due to Ricky Doyle’s foul trouble — on the pick-and-roll for an easy layup as Michigan’s lead ballooned to 15.

“That was the best part of the game for me: We were up big, they ended up answering, and we went right back up big,” Beilein said. “That showed a lot of growth.”

5. Michigan slams the door in the second

Given how the Wolverines have struggled offensively this season, a 17-point halftime lead seemed far from safe — but Michigan put the game out of reach quickly by going on an 8-2 run before the first media timeout of the second half.

It all began with a turnaround jumper from the free throw line by Irvin, whose six-assist, 14-point day was indicative of his improved vision and aggressiveness. Then, Muhammad-Ali Abdur-Rahkman did what he does best, curling around a screen from Max Bielfeldt to drive to the rim, and finishing an off-balance layup over Egwu.

A minute later, following a missed dunk by Malcolm Hill, Abdur-Rahkman slithered to the basket again. That time, a floater off the high glass missed, but Bielfeldt had inside positioning on Ahmad Starks and used it for a tip-in putback.

Then came the play virtually everyone has seen by now — and if you haven’t, watch it a few times. Michigan pushed the pace following another Illini miss, and Albrecht had three defenders focused on him as the guard drove through the lane. Instead of lobbing to Dawkins, who was expecting an alley-oop, Albrecht did… that: A behind-the-head pinpoint pass for a dunk, and a play emblematic of just how thoroughly the Wolverines dismantled Illinois on Thursday afternoon.

“Thank God Aubrey was there — I got lucky,” Albrecht said. “No, actually, I practice stuff like that all the time.”