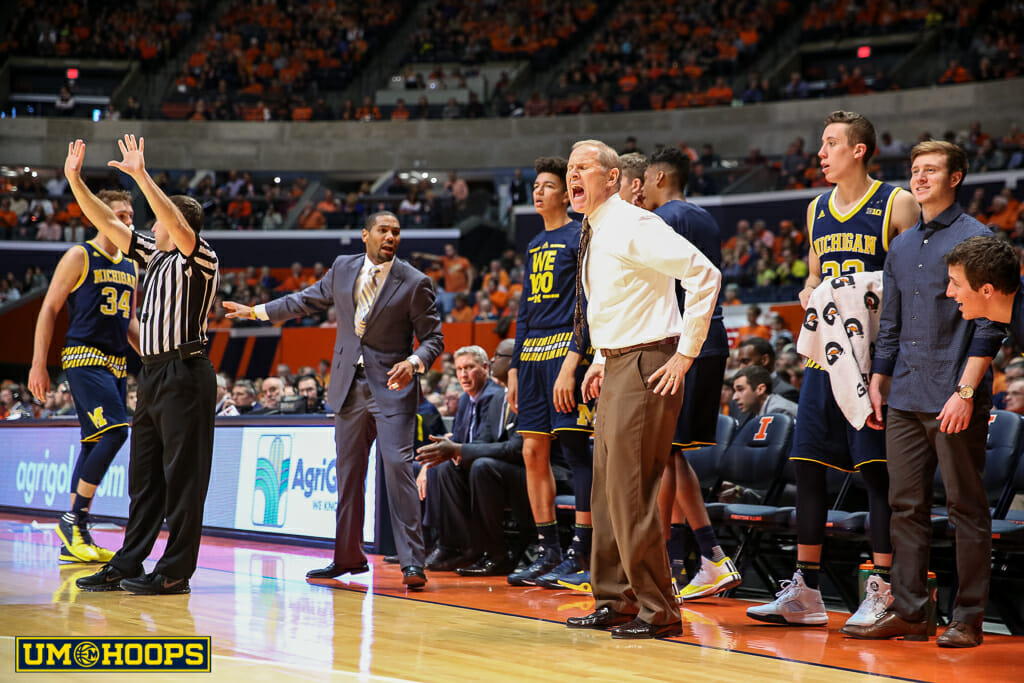 After opening Big Ten play with two dominant wins, the Michigan basketball team has plenty of momentum heading into its Thursday trip to No. 14 Purdue. But with senior guard Caris LeVert still hobbled with a lower-leg injury, that momentum comes with hesitation.

We’re thrilled that we’re able to get two wins in the Big Ten conference. A road win over a very good Illinois team was a good sign and then overcoming some adversity on Saturday, missing Caris LeVert, our guys really came together and played as good a first half as we’ve probably played all year. Really encouraged by all that.

“(I) don’t know anything more — I know we’ve got questions — can’t tell anything more specific about Caris right now. Pain will be our guide, and right now he’s still in some slight pain. That’s all we’ll do, he’ll still be day-to-day moving forward. I can’t be any more specific than that for anyone that’s waiting, so I’ll get it out there and we’ll see. We’ve got three days to practice for Purdue … so we’ll see how it goes.”

On running a LeVert-less offense:

“I think what we’ll have to do here is take it game by game and think ‘How does this other team play?’ I’ve never seen a team marked with a 34-percent field goal percentage defense like Purdue. I don’t know if anybody with the ball in their hands can survive that type of defense. But we will try to mix it up and see what we can do, but I think it’s more of a game-by-game type of decision — Zak, Derrick, Muhammad, everybody needs to improve and find ways to get open which is always difficult against a Matt Painter-coached team.

We wouldn’t have offered him a scholarship — because it was certainly putting it out there and doing something extremely unique — if we didn’t think he could eventually play. But I don’t think anybody in their right mind could think that he would come right in and play at the level that he’s playing right now, immediately. I thought over time that this is where he could eventually get to, but not in your first 15 games that he would be doing what he’s been doing.

“But he’s a smart kid, he’s played college basketball before, albeit at Division-III. I’m not saying I’m not smarter than anybody else, but I’m saying that I’ve coached at the Division-II, Division-III level, and there’s really good players that could play at any Division-I school, they just fell between the cracks, and he’s one of those guys.”

“We take what the opponent gives us, but if you have four or five shooters out there at one time, it makes it difficult for opponents. So the philosophy is that we’re going to recruit guys that can shoot the ball, and sometimes we miss and that, or they don’t develop as shooters like we thought. But basically always having four or five guys on the floor that can shoot, then you see what people give you (defensively).”

“Every day in practice he plays against our first team. Every day, and he has tremendous days in practice, and so you’ve just got to convince him ‘Listen, yu’re doing this against Derrick and Caris every day, those are as good of guards as there is in the Big Ten, you’re going to be playing against them, it’s just not them, it’s people with different names. So you can do this. We don’t need you to do it for 40 minutes, we just need you to give guys rest and not let us drop off. He did more than that in the Penn State game … we played really well with him.”

“We’ll gauge that as it goes along whether he can practice tomorrow or Wednesday. When we put in a gameplan, some guys can pick up things really easily, but we’re being cautious with this thing. But if he’s able to practice and he comes out of practice pain-free, I can tell you that he’ll be playing right after that. Whether he plays after he doesn’t practice, that will probably be up to me and what he can do on the day of the game as well. He knows our stuff pretty well, and he can adjust probably better than our other guys can adjust.

“I think there’s always a chance of anything right now. There’s a chance of if being a one-day issue just as much that it’s a long-term issue.”