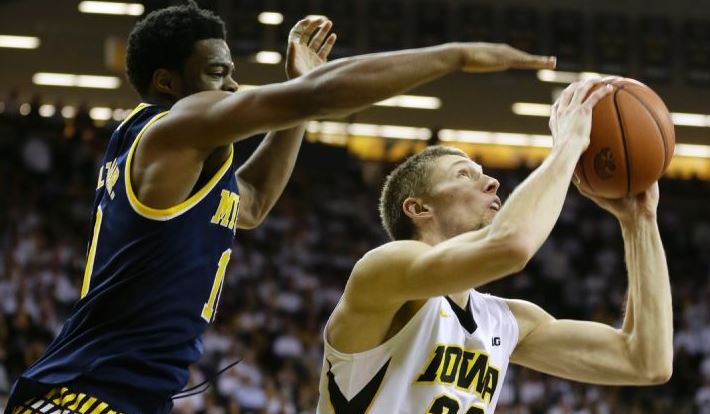 Michigan dropped its second Big Ten game of the season in Iowa City on Sunday evening, falling to an Iowa team that continues to emerge as one of the best in the Big Ten.

Michigan dropped its second Big Ten game of the season in Iowa City on Sunday evening, falling to an Iowa team that continues to emerge as one of the best in the Big Ten.

In an 82-71 loss that fell in line with KenPom’s projected 11-point spread, there were plenty of encouraging moments to fall in line with expected frustrating moments in the loss. Perhaps most encouraging, was Michigan’s ability to consistently battle back on the road.

The Hawkeyes jumped out to an 11-0 run to start the game, but Michigan returned a punch from its back foot. The Wolverines managed to take a one-point lead midway through the first half and had two single-point leads in the second. But Iowa controlled the game and never let Michigan’s lead grow, while continually stretching its lead to double-digits and forcing the Wolverines to battle back.

It wasn’t a win, but it felt like another positive step in the right direction for a Michigan team that continues to play without its best player.

Michigan’s offense went through some lengthy droughts, but also reached potent levels for several three or four minute stretches. In the end, the Wolverines scored 1.12 points per possession — good for the 2nd best offensive performance against Iowa this season.

The scary part of this offensive showing is that the Wolverines still threw far too many possessions. Turnovers were their great undoing, giving the ball away once every five trips, but there were more rushed early shots and missed layups than you can count on one hand. The Hawkeyes outscored Michigan 16-6 in points off of turnovers and those sloppy possessions didn’t just hamstring the Wolverine offense, they put the defense in a bad spot as well.

The Wolverines just couldn’t find the answers to defend Iowa’s length. Michigan is notoriously bad on closing out against shooters and the Hawkeyes have the length to shoot over weak closeouts. Time and time again, Iowa hit big shots whenever Michigan made a run. The Hawkeyes hit 10-of-22 three-point attempts and connected on 5-of-7 attempts from the corner — the majority of which were backbreakers for the Wolverine defense.

Iowa is playing great basketball, but it’s nearly impossible to win games when the other team scores 1.29 points per possession. Michigan has played the second-toughest schedule in the Big Ten to date, per KenPom, but ranks just 11th in the conference in defensive efficiency and 132nd nationally.

Michigan got the win it needed on Tuesday and survived its critical three-game stretch with one win and two road losses. That’s a passing grade, but now the pressure is on again. Minnesota, at Nebraska, Rutgers and Penn State at Madison Square Garden is a far more manageable stretch, but one where the Wolverines can’t afford to drop many, if any, games. Caris LeVert’s health remains a major question mark, but Michigan is figuring out ways to improve even without him.