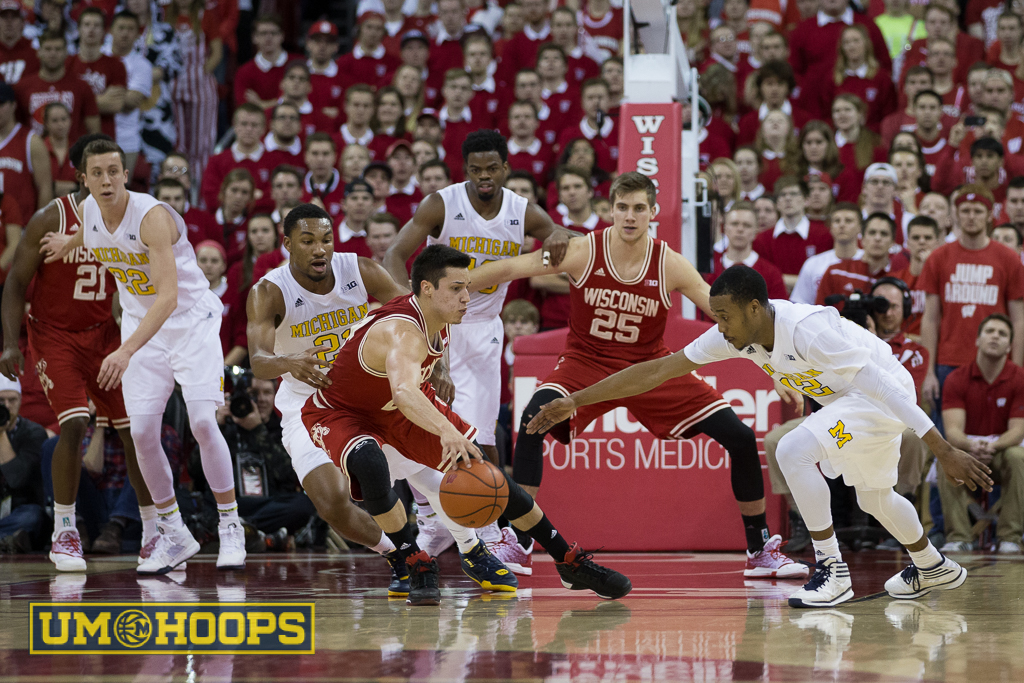 For a preseason look across the Big Ten, we’re publishing a two-part edition of our Big Ten Power Rankings. The first post will feature things that we like about all 14 members of the conference while the second will feature one thing that we’re worried about.

For a preseason look across the Big Ten, we’re publishing a two-part edition of our Big Ten Power Rankings. The first post will feature things that we like about all 14 members of the conference while the second will feature one thing that we’re worried about.

The Badgers are the most-common pick to win the league after they won 11 of their last 13 conference games last season and made the Sweet 16. For Wisconsin, it’s all about the defense. This should be a vintage Wisconsin team that excels on the defensive end, controls the tempo and grinds out wins. The Badgers return their starting lineup from last season including sophomore big man Ethan Happ and seniors Nigel Hayes and Bronson Koenig.

Indiana has pro talent, more than any other team in the conference, and that can take you a long way in college basketball. OG Anunoby (16th) and Thomas Bryant (20th) are the top rated NBA prospects in the league, and two of the only three Big Ten players projected in the first round of the 2017 NBA Draft.

Bryant is arguably the league’s best big man and should be able to build off of a big freshman year in Bloomington while Anunoby averaged just 4.9 points and 2.6 rebounds per game in limited minutes. Anunoby has people excited though and the hype train hasn’t slowed down in preseason play. He’s an elite athlete, an elite defender, with NBA measurables and he shot 61% on twos and 45% on threes. What’s there not to like about the 6-foot-8 sophomore?

His shooting is really the only question mark, even if he shot the lights out in a pair of exhibition games for the Spartans. Bridges was just 63 of 247 from three-point range in a 43 game sample of Nike EYBL and high school games provided by Krossover, and that’s an ugly number for a player who attempted nearly 40% of his shots from three-point range.

That being said, Bridges is going to get every opportunity that he could ask for in East Lansing with so much roster overhaul. This might be one of Tom Izzo’s youngest teams ever, but in this era it’s so often better to be talented than experienced.

Caleb Swanigan usually draws the headlines in West Lafayette, but I’m excited to see what Isaac Haas can do with more playing time now. Haas is bigger than AJ Hammons — really — and, like his predecessor, he’s an elite scorer on the low block.

The only Big Ten player to create more points in the post (including post-up pass outs to shots) than Haas last season was his teammate, Hammons. Considering Haas only played 35% of available minutes, that’s a pretty incredible stat. Expect the Boilermakers to force feed Haas in the post and, as long as he has the conditioning, he should be poised for a monster season.

Michigan senior Derrick Walton is the league’s best returning spot-up shooter, per Synergy, and smallest top-10 defensive rebounder. If that combination isn’t unique enough, he’s also a 6-foot-1 point guard. Walton’s skills are certainly unique, but they’ll be critical on a Michigan roster that will need him to elevate his game as a senior. The Wolverines learned to play without Caris LeVert on the fly last season, but it will be interesting to see how John Beilein gets Walton involved this season — can he get him more spot-up opportunities without another true creator on the roster?

The Buckeyes returning their starting five from last season and trim some of the fat from a disappointing freshman class. The fundamentals of a good defense were evident last year in Columbus — opponents shot 46.7% on twos and 33.4% on threes for the No. 3 ranked eFG% defense in the league — and I’d expect the experienced Buckeyes to take another step forward on the defensive side of the ball.

Maryland is going overlooked, but the Terps have Melo Trimble and an easy schedule. Maryland has one of the least challenging conference slates in the conference and one of the best point guards in the league. That’s a combination that should lead to an overachieving team. Many will point to last year’s disappointment, but a pseudo-reboot could be good from a roster that was obviously talented, but never seemed to be able to mesh with so many transfers and egos.

Trimble is the best pick-and-roll guard in the conference and as long as he stays healthy — he battled a hamstring injury last season — he should be able to stake a claim at conference player of the year.

The Big Ten star that no one seems to be talking about is Iowa senior Peter Jok. Jok was a breakout performer last year, averaging 16 points per game, and could flirt with being the league’s leading scorer given his abilities, Iowa’s pace, and how just how much talent the Hawkeye roster lost.

One might ask how Jok is going to get his looks when the four starters that he played with last year have all graduated, but he’s also a master of a lost art in college basketball: shooting the ball on the move off of screens. Jok scored 115 points on 128 possessions coming off of screens last season, per Synergy, scoring more points off of screens than anyone in the conference other than Michigan State’s Bryn Forbes.

Malcolm Hill drew rave reviews on the summer camp circuit and the 6-foot-6 wing is one of the best pure scorers in the Big Ten. Now the question is whether he’s good enough to get Illinois back to the NCAA Tournament for the first time since 2013. Hill’s offensive game is impressive for his balance, he grades out in the top 25% of college basketball in isolation, transition, pick-and-roll and post-up scoring according to Synergy.

Bryant McIntosh might play for a bottom-half Big Ten team, but he’s going to win over a lot of fans this season. Last year he had to share the backcourt workload with Tre Demps, this season he’s going to be the man for Chris Collins’ Wildcats. McIntosh has the highest returning assist rate in the conference, trailing only Denzel Valentine last season, and is one of the best guards in the league that nobody seems to talk about. He’ll need to improve his shooting a bit — 40% on twos, 28% on threes in Big Ten games — but he should be poised for a big season in Evanston.

There’s something that just feels right about a couple of a Philadelphia guards stepping into the rotation in State College. Top-100 Philadelphia products Tony Carry and Lamar Stevens should provide a much-needed influx of talent for Pat Chambers’ crew. Combined with juniors Shep Garner and Payton Banks and sophomore Josh Reaves, the Nittany Lions should have plenty of slashing ability in the backcourt and on the wings this season.

Minnesota brings back the talented duo of Nate Mason and Jordan Murphy — who led the Big Ten in points off of putbacks, per Synergy — and adds a talented freshman wing guard in Amir Coffey. This should be one of Richard Pitino’s most talented teams yet at Minnesota, but the Gophers still have a long way to go.

Nebraska loses a lot, but the Huskers deserve credit for maximizing possessions last season. Tim Miles’ team ranked 2nd in Big Ten games in offensive and defensive turnover rate, and 1st in the Big Ten games in offensive and defensive steal rate. Returning guards Tai Webster and Glynn Watson are both among the league’s best pick pockets and Watson, a rising sophomore, could need to take a big step forward this season with Andrew White III, Shavon Shields and Benny Parker.

For Rutgers, a fresh start and a reason to throw out last year is the best news that you could ask for this offseason. New head coach Steve Pikiell certainly has his work cut out for him, but the only way to go is up for the Scarlet Knights.