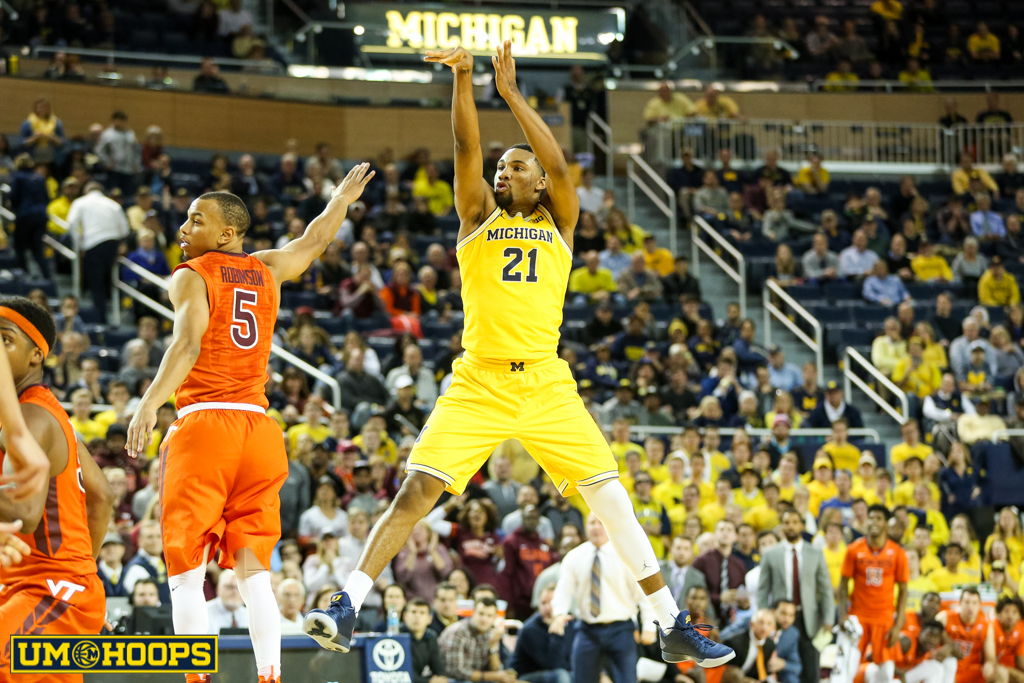 The Wolverines controlled Wednesday night’s game against Virginia Tech for about 38 minutes, but they thought they could coast to the finish and couldn’t have been more wrong.

College basketball games don’t win themselves. And they aren’t won in the first 20, 30 or 35 minutes.

The Wolverines controlled Wednesday night’s game against Virginia Tech for about 38 minutes, but they thought they could coast to the finish and couldn’t have been more wrong. The Hokies kept coming and kept executing while Michigan made more than enough mistakes to give them second and third chances before the whole thing unraveled in the final 120 seconds.

There were more than enough opportunities for the Wolverines to salt this game away.

Michigan had regained a double-digit lead with 7:44 to play with Derrick Walton going to the line for a one-and-one. Not only did he miss the front end, DJ Wilson committed a foul pursuing the rebound resulting in free points on the other end of the floor. The Wolverines went cold down the stretch and Wilson would commit another foul chasing a rebound with 3:03 to play, fouling out of the game and allowing Virginia Tech to cut the lead to just two.

Michigan still had a clear chance to win, down 1 with the ball and under 30 seconds to play, but resorted to Zak Irvin hero ball down the stretch and watched the game just slip away as a well-executed final second shot by Duncan Robinson rimmed out rather than tying the game.

Michigan lost this game with its defense, which was strong early and fell apart late. The Wolverines held Virginia Tech to just 8 points in its first 12 possessions. Then the Hokies scored 65 in the final 52 possessions (1.25 points per trip). The defense came unglued because of foul trouble and most of Michigan’s foul concerns were unforced.

The Wolverines committed handfuls of fouls off the ball, chasing loose balls or offensive rebounds. There aren’t many plays in basketball more costly then fouling while chasing an offensive rebound when the other team is already in the bonus — a lesson the Wolverines certainly learned today. Virginia Tech made 19-of-21 free throws, and was in the bonus early in both halves, Michigan only made 4-of-7.

Michigan’s offense was probably good enough to win if it could get a couple of extra stops down the stretch. The Wolverines scored 1.1 points per possession — they only lost once when reaching that mark offensively last season — and shot the ball well until the final 6 or 7 minutes. There were plenty of bright spots on offense across the board, but when the game was on the line there were no answers.

Make no mistake about it, this is a brutal loss and one that the Wolverines will be kicking themselves over for a while, probably until Selection Sunday. Virginia Tech is a good team, but this is a game that Michigan had in the bag on its home floor. On the other hand, one November game doesn’t make a season. Just like, as is very clear by now, the games two weeks ago in New York didn’t necessarily show us the complete picture, this loss is only one chapter. There are still 24 of these things left in the regular season, but the Wolverines have some soul searching to do.

I immediately think back to two years ago when Michigan’s season went off track with a couple of upsets after the Big Ten-ACC Challenge, and this group needs to re-focus and not let one brutal loss snowball into two or three. Kennesaw State comes to the Crisler Center on Saturday in what feels like a trap game for a team in a crisis of confidence and then the Wolverines face a slumping Texas team desperate for a win and travel to UCLA before final exams.