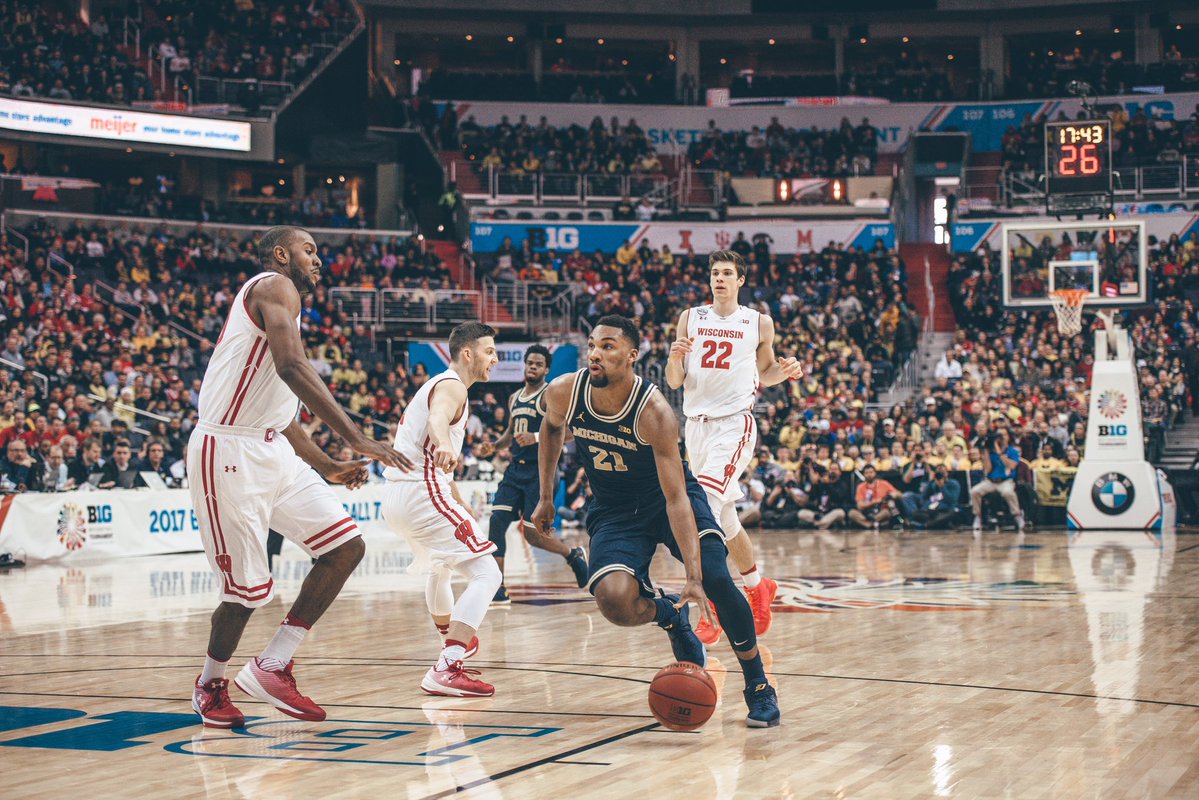 Michigan’s Big Ten revenge tour in Washington D.C. will end with a trophy presentation. The Wolverines put together a complete effort to knock off Wisconsin in the Big Ten Tournament Championship on Sunday afternoon.

After playing two games decided by a combined 10 points this season, Wisconsin gave Michigan a fight, but the Wolverines controlled the action. Michigan never trailed by more than a point (6-5 early in the first half) and even if they never quite pulled away, they were the dominant team all afternoon

It was over when…

Michigan stretched its lead to 10 or 11 points several times, but always seemed to go cold from the field as Wisconsin would answer with a run.

But the Wolverines put together the decisive run down the stretch thanks to their transition play. DJ Wilson scored on a lobbed layup and then Muhammad-Ali Abdur-Rahkman, DJ Wilson and Derrick Walton all picked up transition dunks or layups to close the game.

The final one, a finger roll by Walton capped a hell of a week by the senior point guard.

Stat of the game: Three-point shooting

Michigan was on fire from three-point range in the first half as it knocked in 7-of-13 three-point attempts, but tired legs started to show in the second. The Wolverines made just 1 of their first 7 three-point attempts in the second and just couldn’t pull away, but Zak Irvin and Duncan Robinson hit back-to-back threes late in the game to keep the lead intact. Michigan finished the game 10-of-23 from long distance despite playing its fourth game in four days.

Walton continued his incredible tear that can only be described as Kemba Walker-like. He hit big time jumper after big time jumper, even while playing his fourth game in as many days. Most importantly, he controlled the game for the Wolverines and picked his spots to attack. The senior guard handed out 6 assists on the night and also scored 21 points on 6-of-15 shooting.

But the real MVP might have been Michigan senior Zak Irvin who banged against bigger players and hit all of the big shots that Michigan needed, playing another stellar game against Wisconsin. Irvin finished with 15 points on an efficient 6-of-9 shooting line, with 7 rebounds and five assists.

Wilson’s first two games against Wisconsin were humbling to say the least, but he came to play on Sunday. He finished with 17  points on 8-of-10 shooting and 6 rebounds rebounds in a complete performance that also saw him spend significant time at the five spot guarding Ethan Happ.

The DJ Wilson as a small ball five concept has picked up serious momentum in Washington D.C. and I’d expect it to continue into the NCAA Tournament as Wilson proves that he’s capable of defending fives and exploiting many of the same offensive mismatches as Moritz Wagner.