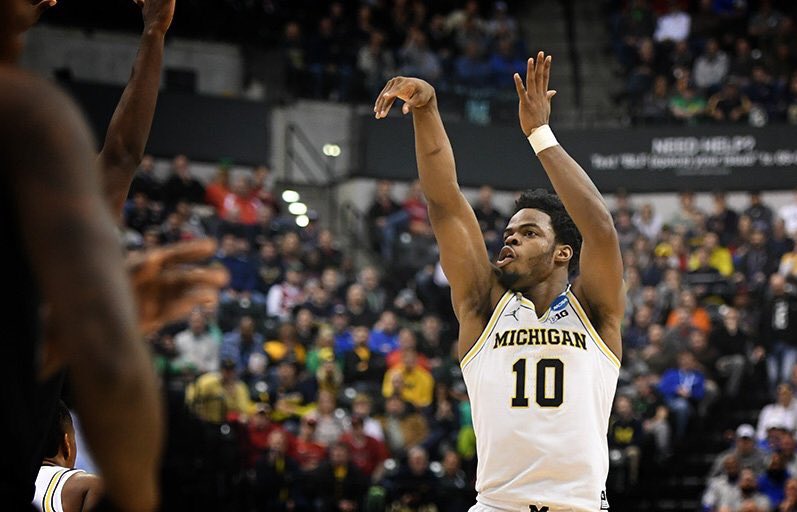 “Our team has shown that kind of resiliency the last 10, 12 games. (Today) we got down seven, we fought back and got up one at halftime. Coming out of half, we were kinda lethargic in our pace, then we buckled back down and got after it.”

INDIANAPOLIS — With just under 17 minutes left in the second half, Derrick Walton limped off the court. It was a sight Michigan did not want to see: the player the Wolverines could ill afford to lose was their brilliant senior point guard, especially as Oklahoma State was making yet another run.

Walton hobbled to the bench, the Cowboys promptly extended their lead to six, and John Beilein called timeout.

The droves of Michigan fans at Bankers Life Fieldhouse held their collective breath, waiting to see how their team would respond out of the break.

The Wolverines struggled earlier in the season when other teams hit them in the mouth. They were corralled into a poor shooting performance at South Carolina. They blew a late lead against Virginia Tech. A hot shooting performance in the first half of a game against UCLA died away, leading to a blowout.

That has changed, though, with everything that has happened in the second half of the season — from wins at home against Wisconsin and Purdue to a magical run through the conference tournament after that near-tragic plane accident.

“It’s a learned behavior,” said assistant coach Saddi Washington. “I think our guys are really in the pocket now where we understand the gameplan, and now we’re executing the gameplan to the end.

“Our team has shown that kind of resiliency the last 10, 12 games. (Today) we got down seven, we fought back and got up one at halftime. Coming out of half, we were kinda lethargic in our pace, then we buckled back down and got after it.”

Now, Michigan knows how to roll with the punches — and it was fully on display against the Cowboys Friday afternoon.

During the timeout, Walton — who John Beilein thought had left the game because his stitches popped open — checked back in at the scorer’s table. While he had 10 points, he had suffered through a lackluster first half — at least by his coach’s standards.

“During one timeout, I coached him pretty hard,” Beilein said. “I did not like what I was seeing in the first half because the pressure that he was seeing — he was deferring again. … We have to get to our spots on the floor. If that spot isn’t there, you got to have a counter plan to it. He wasn’t countering at all, he was deferring. That’s when we have to coach him really hard and convince him to take over, control this team and run this team.”

Knee burn be damned, Walton re-entered the game and proceeded to set Oklahoma State on fire.

The first possession on offense ended with him finding Muhammad-Ali Abdur-Rahkman under the basket for a layup. The next trip down the floor, Walton kept it himself and drained a three-pointer — one of five in the second half. Time after time in the second half, it was Walton who burned the Cowboys, leading Michigan to victory.

Walton’s re-insertion and subsequent performance wasn’t the only catalyst for the Wolverines’ victory. The first — quite unexpectedly for all parties involved — had occurred earlier in the game.

With 16:49 left in the first half, sophomore forward Moritz Wagner checked out after picking up his second foul. At that point, the Wolverines’ offense had yet to ignite, and that continued to be the case with Wagner on the bench as Oklahoma State opened up a seven-point lead.

So nine minutes later, with his team dangerously close to the edge against the fast-paced Cowboys, Beilein rolled the dice: he subbed his star forward back into the game.

“That meant a lot to me, first of all, because he’s never done that before,” Wagner said. “He has that rule, and he trusted me in that moment. I think he trusted my maturity level a little bit, and I’m very happy that he did that and that I ended up not fouling again.

“I was surprised, for sure, because that’s his rule. I was getting ready for the second half already. But like I said, I was very happy that he trusts me that way.”

It took mere seconds for Wagner to spark his team. He passed the ball out to the wing, received a screen in turn and drove to the basket. Walton hit him in stride, Wagner laid it in softly and the comeback was on.

When Wagner left the game with 5:03 left in the half, Michigan trailed by just two. Most importantly, its offense had begun to show signs of life. The gamble had paid off, and as Washington quipped after the game, the rest is history.