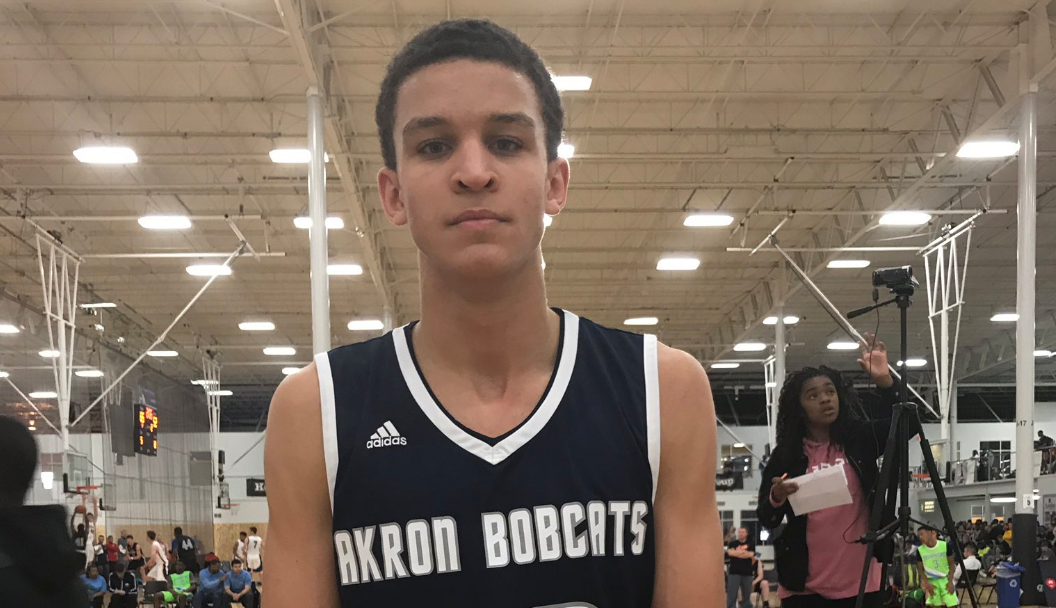 Pete Nance is different than most elite high school basketball players. On Twitter, he retweets final scores and stories about teammates. There is no record of his own accomplishments (he’s a Rivals top-40 recruit in the class of 2018) or declarations of his top five schools. On the court, though, he looks the part. The 6’10” “point-forward” has coaches raving about his potential at the next level.

According to the website City of Basketball Love, the junior at Revere High School in Richfield, Ohio, has Michigan, Ohio State, and Northwestern as his top three choices. He “kinda, sorta” admitted that again over the weekend in Fort Wayne.

Jack Leslie, who coached Nance from fourth through ninth grades and runs Nance’s AAU program, the Akron Bobcats, said Michigan was among the first schools to recruit him and is “one of the few schools at the very top of his list.”

Added Nance’s high school coach, Dean Rahas: “Michigan has a great tradition and a great coach in Coach Beilein, one of the best in the business. That really has Pete excited.”

It’s easy to see why Beilein reciprocates the interest. Pete’s father, Larry Nance, Sr., is a former first-round pick who played 13 seasons in the NBA. His brother, Larry, Jr., plays for the Lakers after a successful career at Wyoming. Pete has their height but a more polished perimeter game. He has played and defended all five positions on the court, and is a good rim protector, an asset Beilein covets as the college game evolves.

Nance can handle the ball, shoot the three off the dribble, and work in the post. His most valuable skill, coaches say, is his passing, particularly out of the post. In fact, sometimes being too unselfishness is the only knock on his game. “He’s always wanted to be that kind of facilitating guard,” said Zack Weidrick, Nance’s AAU coach for the past three years. “He’s always had that mindset.”

Michigan’s coaches first heard about Nance while recruiting rising sophomore Jon Teske. The Medina, Ohio native was coached by Chris Hassinger, a close friend of the Nance family who has coached a couple of Pete’s AAU teams and trained him in his school’s gym. Hassinger has coached for more than two decades and seen plenty of Division I talent.

“Here is what I’ve been told by credible coaches,” Hassinger said. “Guys at the mid-major level think if he went to a mid-major he’d be a one-and-done kid because he’ll be on the floor all the time and he’s got that much upside. I’ve had at least three Big Ten teams that said he’s a guy who can play in the league, no doubt.”

You’ll have to excuse this comparison, but the NBA player whose name comes up most often when describing Nance’s potential is Kevin Durant. Leslie said Nance played a very competitive game of one-on-one last summer against Brandon Ingram, a one-and-done player out of Duke who was drafted No. 2 by the Lakers and just wrapped up his rookie season.

Off the court, Nance’s coaches speak about his loyalty—the Bobcats are not exactly an AAU powerhouse, but Nance has stuck with the program his entire career—and his tendency to deflect credit. They said the next step in his development is adding strength to his lanky frame.

Will that phase take place in Ann Arbor?

“He wants to go to a place where he has the ability to win and have his game shine,” Weidrick said. Nance is a playmaker, not a plodder and, according to Weidrick, wouldn’t want to play for a coach that will “tell him to post up 50 times a game.” Beilein certainly doesn’t inspire that concern.

Hassinger has gotten to know Beilein well over the past few years and admits he is biased towards the Wolverines. “It’s a great basketball program and great university. You come out of there with an unbelievable degree; it’s so prestigious.”

It’s tantalizing to think about Nance in the maize and blue, especially when his coaches envision continued development. Hassinger calls Nance a “late bloomer” who is starting to exhibit some of the athleticism of his brother and father, through displays such as throwing down windmill dunks in empty gyms.

Michigan only has one commitment in the class of 2018 (Detroit point guard David DeJulius), but Nance remains in the thick of the outstanding targets on the Wolverine radar and they will certainly be tracking his progress throughout the summer.