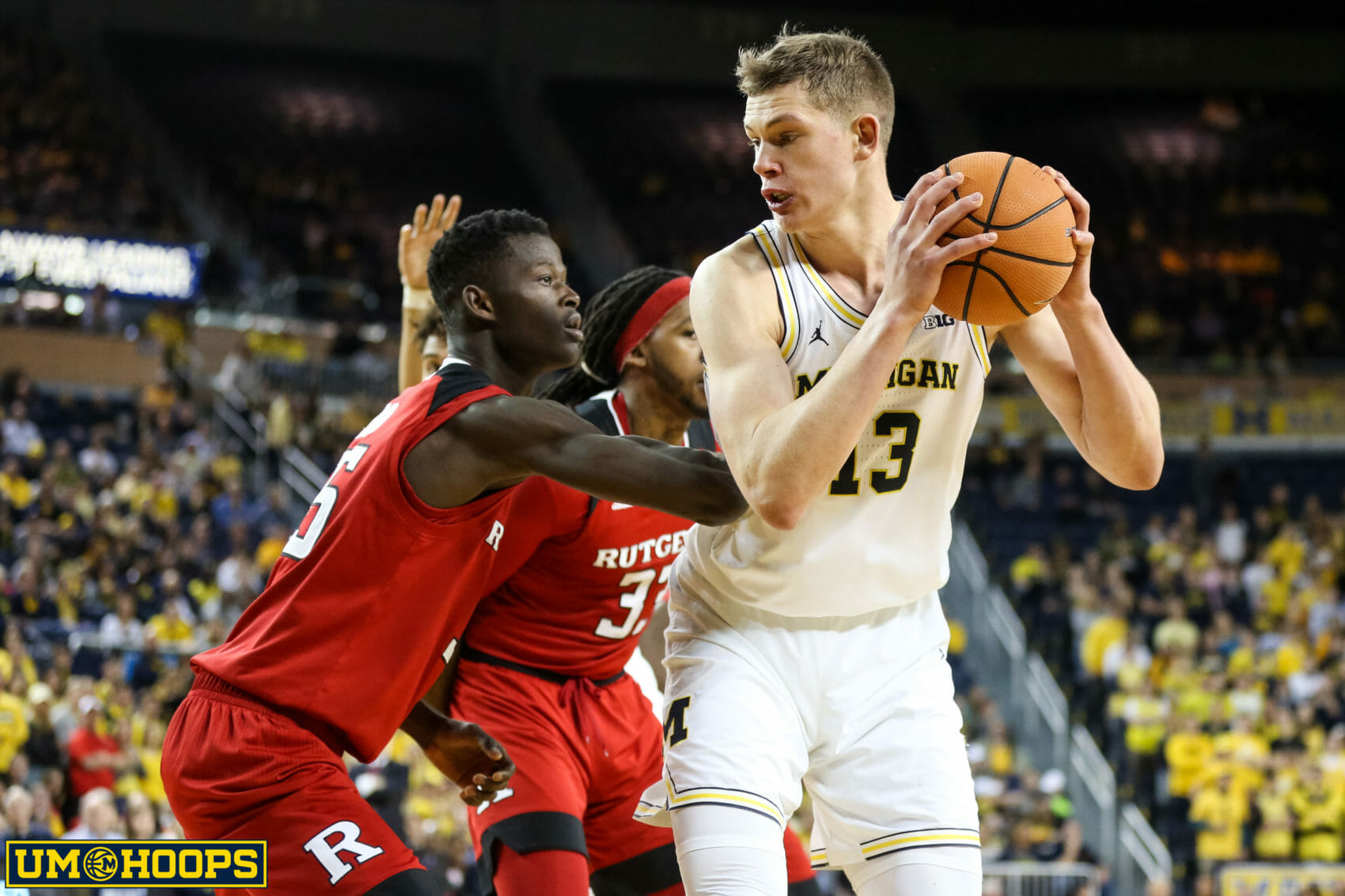 Coming off a demoralizing loss to Nebraska on Thursday, Michigan came out sluggish against Rutgers on Sunday. The Wolverines managed to win anyway, 62-47, in a game that wasn’t especially close after the first 10 minutes. Here are five takeaways.

Duncan Robinson might have broken out of his slump

After shooting an abysmal 25.8 percent from beyond the arc through the first eight games of Big Ten play, Robinson busted out of his slump on Sunday.

He shot 4-of-8 from the field, all of his attempts coming from 3-point land, including two early triples that helped get Michigan going against a zone defense that forced the Wolverines out of their comfort zone. Robinson also had five rebounds and four assists. This was his best game in weeks and it wasn’t particularly close.

“That’s the dude I know,” said Moritz Wagner. “That’s my roommate, that’s the player I’ve played with the last three years, so I’m not surprised at all and I’m very proud of him, the way he bounced back and just is himself.”

One good game against Rutgers doesn’t mean much for Robinson if he can’t carry it over. It seemed like he broke out of an early-season slump exactly one month ago against Alabama A&M when he scored 18 on 5-of-7 shooting from 3. In the ensuing seven games, he shot 30.4 percent from outside.

Whether he’s coming off the bench or not is of little import. If Robinson can shoot 3-pointers at the 42.4 percent clip he did last season, a whole lot of Michigan’s offensive problems go away immediately.

“He needs to hunt shots,” said John Beilein. “He needs to shoot it and turn it down, not look for permission on shots. We’re gonna take his shots and good or bad, he can shoot it in. What we see in practice, in his drills, is phenomenal. Then when we go into practice sessions, he’s asking for permission. He doesn’t need permission. I trust him.”

Jaaron Simmons is back in the rotation

It’s taken most of the season, but Simmons has become a regular in the rotation, picking up eight minutes on Sunday and playing well. He was on the floor for an early 10-0 run, picking up an assist and playing good defense throughout. Though the scoring Simmons was known for at Ohio wasn’t there — he shot just 1-of-4 from the field — the grad transfer is showing progress.

“We needed Eli (Brooks) to get his confidence back,” Beilein said of the rotational shift. “It happens with freshmen all the time. And with practice and games, Eli was not himself. He was asking for permission, he was tentative.

“Jaaron, when we put him on the scout team, and he did some really good things. So, we just made that flip, let Eli watch the game a little bit and let Jaaron go. So, he’s given us some things — he’s playing better defense, we had different rules that he was not picking up as quickly. But other than that, he’s handled it like a champion.”

Given the improvement Michigan has seen from Zavier Simpson on the offensive end, the Wolverines don’t need Simmons to carry the load. They need productive minutes off the bench and Sunday was the closest that Simmons has come to providing that lift.

Odd as it is to say, Michigan is a defensive team right now. That was evident yet again on Saturday, as the Wolverines held Rutgers to just 0.75 points per possession.

It’s important to note the Scarlet Knights’ offense bares a large brunt of the responsibility there. Rutgers’ offense was notably horrific and has struggled to score all season long. However, Michigan still did its job, holding Rutgers to just nine 3-point attempts, and the Wolverines deserve credit for that.

“We had to lock down individually,” Beilein said. “…They have guys who can get their own shot and you gotta have good defensive guards to do that.”

The shift in the Wolverines’ defensive ability is no longer a debate. This is who Michigan is now.

“We just went into this year with a mindset that the identity is different,” Wagner said. “Me personally being called certain things last year was like, ‘I’m done with this stuff.’ We want to be a rebounding team, we want to run out in transition and have fun, just play tough.”

That’s not the first time Wagner has referred to a shift in the team’s identity and it won’t be the last either. Michigan is top-20 in the country in defensive efficiency after Sunday and there are only three KenPom top-50 teams left on the schedule (Purdue, Ohio State, Maryland). There isn’t much reason to believe they’re going to slow down during the regular season.

Slow starts are becoming a trend

Sluggishness out of the gate has become a theme for Michigan lately. The Wolverines went down 26-12 against Maryland, eventually coming back, and 26-16 at Nebraska, failing to do so. On Sunday, Rutgers started the game on an 8-2 run as Michigan blew layups, 3-pointers, and second-chances galore.

“We don’t go in guessing how they’re going to play us,” Beilein said. “Usually I’m just watching — I want our guys to be as basic as they can in the first few (possessions) so I can find out how they’re playing. I don’t know what they’re gonna do.”

Rutgers started the game playing fairly traditional ball-screen defense on most possessions. However, the Scarlet Knights transitioned to switching most of them later on, a strategy that stymied Michigan at Nebraska on Thursday. However, Wagner found success slipping screens against switches, diving to the rim before his defender could adjust.

As for the start itself, Sunday felt more attributable to general sloppiness than anything else. Beilein’s explanation makes sense insofar as putting a finger on the larger trend, but the Wolverines had open chances early on Sunday and missed them.

“We actually played good defense, but then we turned it over too much,” Wagner said. “We ended up with nine turnovers, I think we had more than half of them in the first half, so we went in transition then we threw it away. You can’t do that, you gotta play more efficient.”

Michigan needs some rest and relaxation

It was evident from the beginning on Sunday that Michigan didn’t have its legs. The Wolverines were, quite simply, tired.

Michigan has played seven games in the last 20 days, four since January 13. There are three days until Thursday’s game at Purdue and the Wolverines are in dire need of that rest.

“Our kids need just a day off,” Beilein said. “And that’s gonna be huge for us just to have a day.”

According to Beilein, the team won’t even be allowed to touch a ball on its day off. The only work Michigan will do is lift weights.

“When you have a two-day prep with a day off, the middle day is the get-better day,” he said. “We haven’t been able to get better.”

The good news for Michigan is that it won’t experience a stretch like this for another few weeks. There are at least two days between every game left this season, with a few longer breaks mixed in. The Wolverines didn’t just survive the worst bit of the schedule, they went 6-2.

Michigan will take that every day and twice on Sundays.

“If you take the days off, each week it’s like there’s only one practice for almost every game but, I think, Michigan State,” Beilein said. “And so you’re just playing and you’re playing and you just can’t — the shooting drills, the repetition drills we do, we haven’t done any of them. So, hopefully we can get back to that. To be 6-2 in that run was really good.”