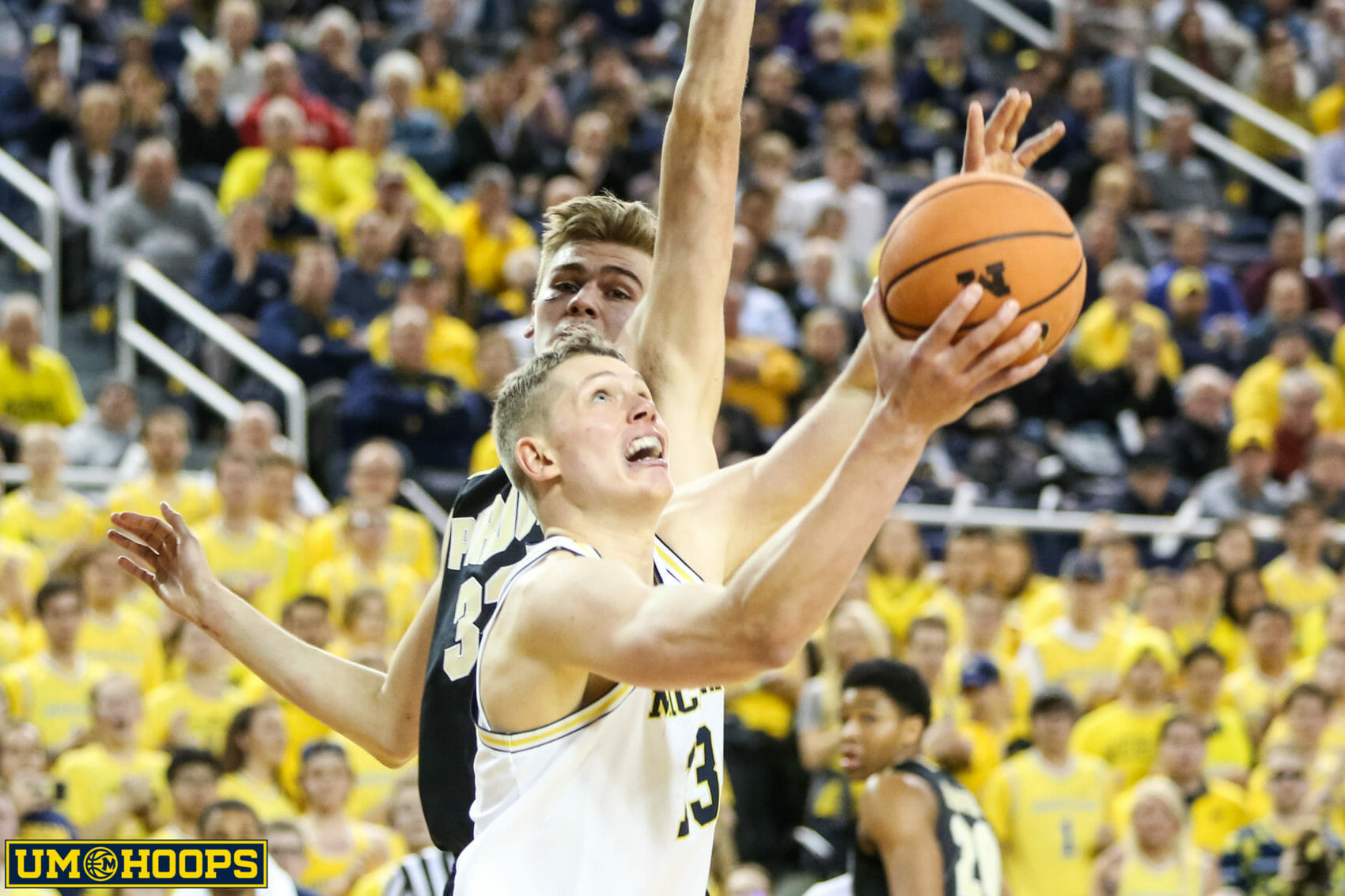 We previewed Purdue in-depth two weeks ago and recapped that game in-depth. Rather than regurgitate that preview ahead of tonight’s rematch in West Lafayette (7:00 p.m., ESPN), we decided to take a deeper look at some of the key areas that will decide tonight’s game.

Purdue’s offense is ranked 4th nationally in adjusted efficiency thanks to its rare combination of elite post-up play and perimeter shooting.

Only Jock Landale scores more points per game on post-ups than Purdue center Isaac Haas, per Synergy, and Haas is more efficient than most of the other top post-up scorers in Division I basketball. It is almost impossible to sell out to stop Haas in the post because he’s surrounded with experienced shooters who can make you pay.

John Beilein noted in his pregame press conference that Purdue runs very effective action away from the block when they look to throw it into the post. This is effective at freeing Purdue’s shooters for open looks while the defense focuses on the action down low. The Boilermakers don’t just have quality shooters, they have players who are effective shooting on the move and coming off of screens.

Carsen Edwards, Vince Edwards, Dakota Mathias and PJ Thompson are all shooting 40% or better from 3-point range overall and in Big Ten games this year.  They are an elite shooting group and they have an experienced track record that demonstrates this isn’t a fluke. 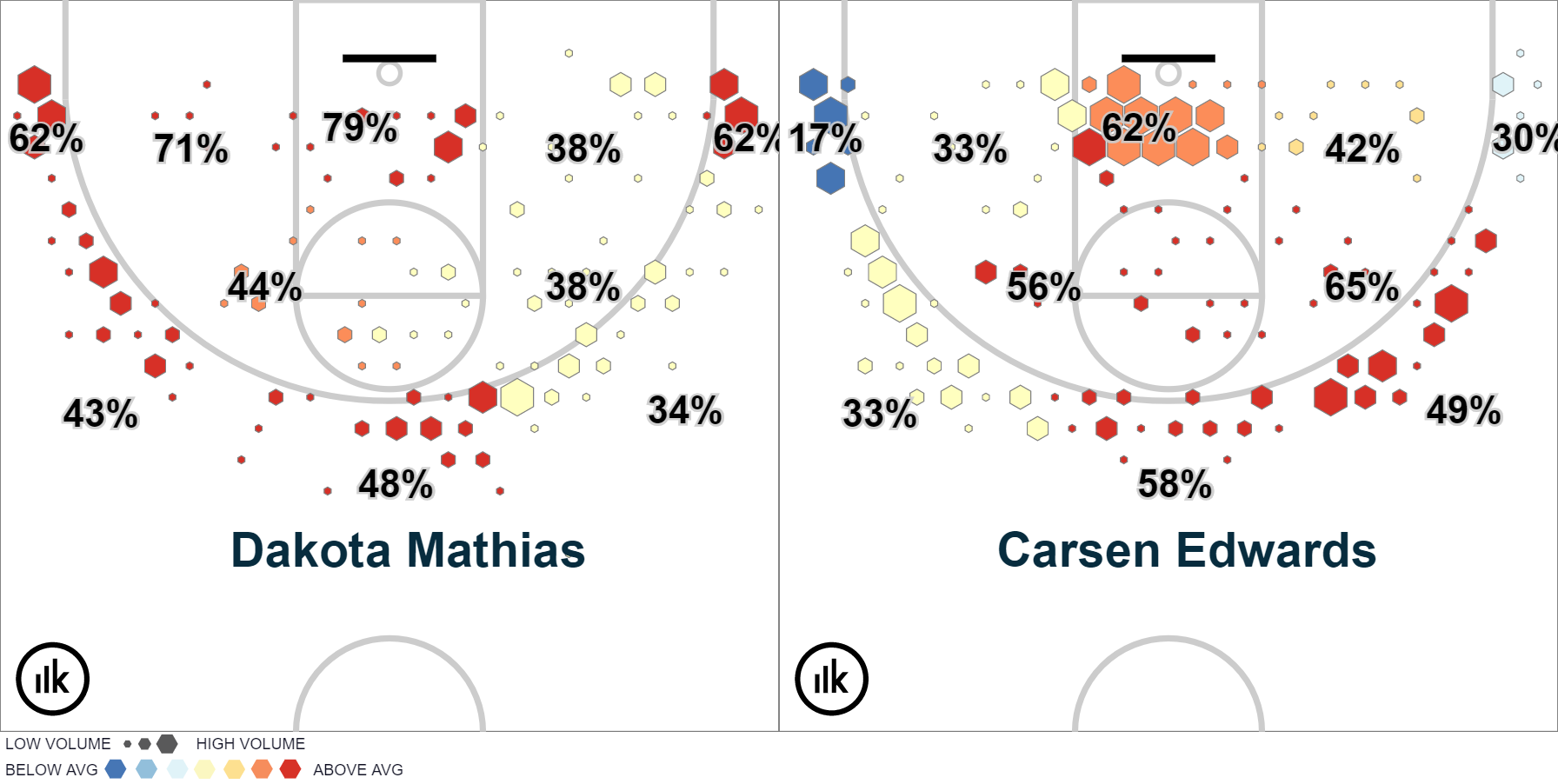 Purdue’s defense is ranked 3rd nationally in adjusted efficiency and leads the Big Ten at .923 points per possession allowed in league games. The 1.14 points per possession that Michigan scored against Purdue in the first meeting was the second-worst defensive performance of the year by the Boilermakers.

There’s no question that Michigan’s offense is a natural mismatch for Purdue. Isaac Haas defending on the perimeter against Moritz Wagner isn’t what Matt Painter wants and the Wolverines have had some impressive showings against Purdue recently.

In the previous meeting, Purdue switched every ball screen in the first meeting in order to negate Moritz Wagner’s ability to attack from the perimeter. Wagner had a relatively quiet night — 11 points on 11 shots — as Matt Painter dared Michigan’s guards to try and win the game.

There are ways for Michigan to attack switches, but at the end of the day that often comes down to making a play with the ball. That consistently put Zavier Simpson, Muhammad-Ali Abdur-Rahkman, and Charles Matthews in situations where they had to attack one-on-one.

Simpson had one of the better games of his career, finishing with 15 points on 6-of-10 shooting with 5 assists and a pair of threes, while Matthews struggled at times. Matthews turned the ball over 4 times and was just 2-of-9 on shot attempts inside the arc, but did knock in 3-of-5 triples.

Muhammad-Ali Abdur-Rahkman has also been far from his usual self around the basket. He’s only making 33% of his 2-point attempts in league play after shooting 53% or better inside the arc in his first three seasons of Big Ten basketball.

That production inside the arc that comes via driving against the pick-and-roll switch will be critical and Michigan has left points on the board at the rim over its last three games.

Isaiah Livers scored an important 10 points off the bench against Purdue in the first meeting, but his defensive performance against Vincent Edwards was even more impressive.

Edwards scored just 10 points on 4-of-10 shooting in the first meeting. He’s averaging 21 points per game and has made 14-of-21 twos and 11-of-17 threes over Purdue’s last three games. 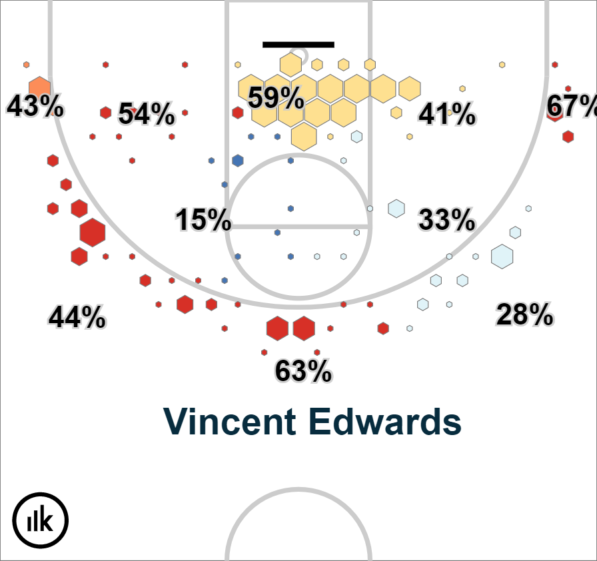 Livers stepped into the starting lineup after that game against Purdue, but has cooled off a bit after reaching double figures in the first 3 conference games of 2018. Livers is just 3-of-10 from deep, has been whistled for 10 fouls, turned the ball over 6 times, and has failed to reach double figures over Michigan’s last four contests.

This is a game where Michigan needs Livers’ size, versatility and athleticism against a similarly dynamic combination forward in Edwards, but he’ll need to replicate those early conference showings.

Michigan’s win in East Lansing earlier this month was a masterful display of game control. The Wolverines never allowed more than 7 unanswered points and kept the game in-check with solid defensive rebounding, transition defense, and big shot-making. Michigan was unable to execute a similar script at Nebraska as a couple of early Cornhusker runs put the game out of reach quickly.

To win in West Lafayette, Michigan will need to figure out how to replicate that effort from the Breslin Center and keep the game within arm’s reach for 40 minutes.

Michigan is really the only team to test Purdue over the last month, but that speaks to just how well the Boilermakers are playing. They have been blowing out Big Ten competition and have been nearly unstoppable at home. KenPom projects a 72-59 Boilermaker win and gives the Wolverines just a 13% chance at the road upset.