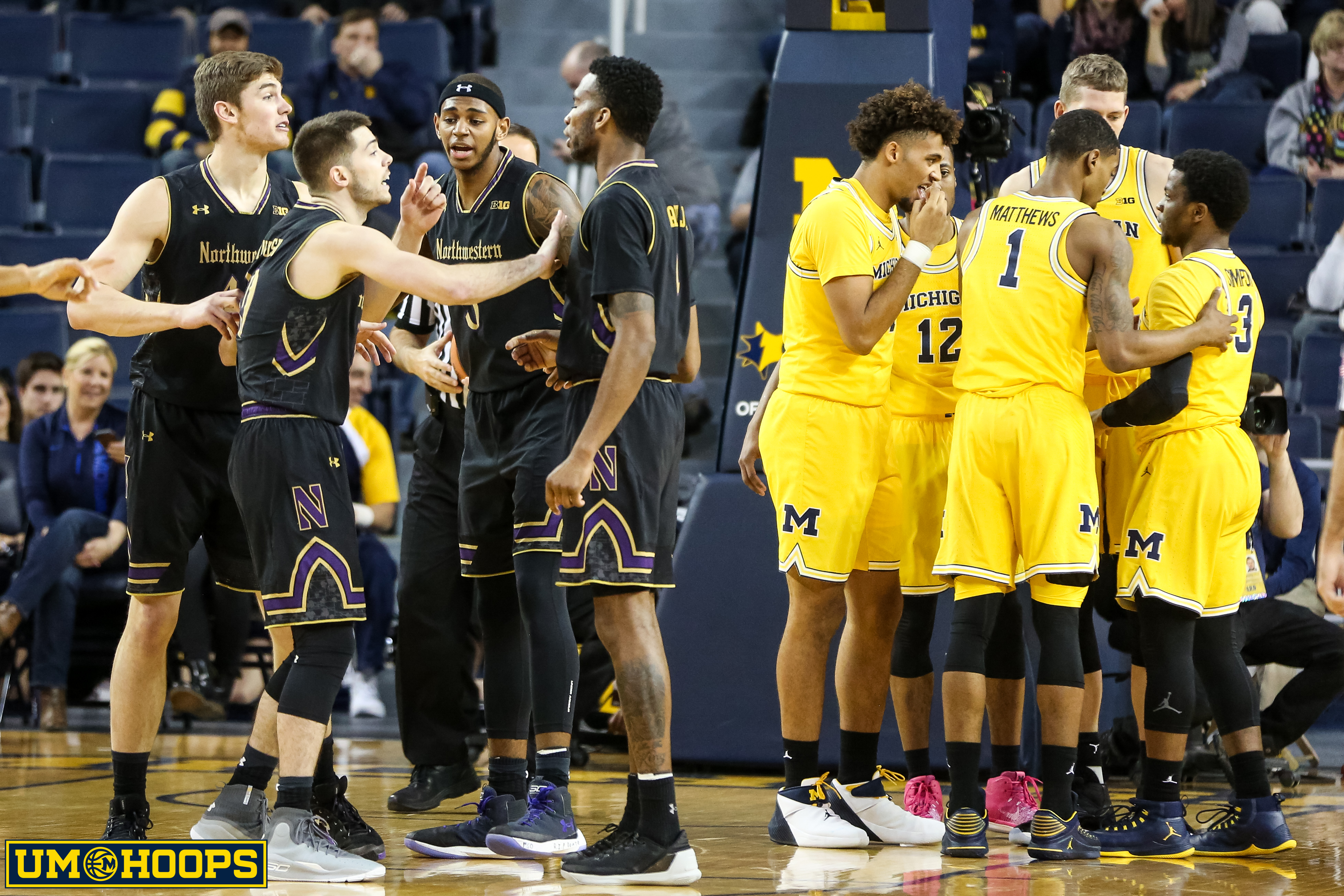 Just a week after their first meeting, Michigan and Northwestern will meet for a rematch in at Allstate Arena in Rosemont, IL (7:00 p.m., BTN).

Just a week after their first meeting, Michigan and Northwestern will meet for a rematch in at Allstate Arena in Rosemont, IL (7:00 p.m., BTN).

The Wolverines won the first meeting by a final score of 58-47 in a grind-it-out 59 possession slug fest. Both teams picked up victories over the weekend and Michigan will be looking to win its first road win since its upset victory at Michigan State back in January.

Rather than re-hash last week’s preview or recap, we’ll focus on five keys to tonight’s game.

1. Figure out the matchup zone

Northwestern made the move to a matchup zone defense this year after their man-to-man struggled early in the year. Michigan looked hopeless against the zone in the first half, scoring just 21 points in 29 possessions, but scored a far more impressive 37 points in 30 second half possessions (1.23 points per trip). Both teams are likely to make adjustments after the first meeting, especially with it taking place just a week ago, but that comfort that the Wolverines developed in the second half should help them on the road.

Michigan’s most effective plays against the Wildcats in the first meeting came from dribble penetration and kick action to the opposite corner or an array of nice overload sets like this to create easy baskets.

Charles Matthews has been critical to Michigan’s zone offense this season and has had some of his better moments against zone defenses, but the Wolverines will need him to play one of his more consistent games of the season on the road.

If Matthews is the key in the middle of zone, the Wolverines also need someone to step up and shoot threes over the zone. Duncan Robinson was 0-of-6 from three in the first meeting, but he had numerous open looks.

Michigan’s ball screen defense was phenomenal in the first meeting and it will be tested once again on the road. Northwestern runs a lot of ball screen action and not only is Bryant McIntosh a threat to score, he opens up the rest of the Wildcat offense through his skill in the pick and roll. Michigan did a great job of forcing turnovers in the first meeting because its help after the initial screen was so effective. That will have to be the case once again otherwise Michigan risks letting Dererk Pardon get loose after a 17 point performance vs. Wisconsin.

Bryant McIntosh is a great player, but the key is to force him to beat you as a shooter rather than a playmaker and distributor.

Northwestern is the No. 3 offensive rebounding team in Big Ten games, but Michigan blanked the Wildcats on the glass in the first meeting. That has been a common occurrence this year for the Wolverines, who lead the league in defensive rebounding rate.

Moritz Wagner has played back-to-back very solid games on defense and on the glass, containing Pardon in the first meeting and Jordan Murphy against Minnesota, and he’ll need to build on that on the road.

On the other end of the floor, Michigan needs to figure out a way to get Wagner involved consistently against the zone. He scored just 8 points on 7 shots in the first meeting and never found a comfort zone on offense.

Michigan’s free throw woes feel like a problem that will get worse before improving. The Wolverines made 28-of-35 free throws on the road in East Lansing back in January, but are shooting just 56% at the stripe in the six games since. It is hard to pin any individual loss on free throw shooting — yet — but it feels like it is only a matter of time before the Wolverines let a game slip away because they can’t make free throws down the stretch.

Northwestern took the air out of the basketball early at Michigan and will try to do the same thing tonight. Michigan’s transition offense is critical to its success because it has struggled to score consistently in settled situations. The Wolverines were able to capitalize on some turnovers and create some energy in the second half of the first meeting, but they’ll need to figure out how to get those easy baskets on the road.

Every Michigan game at Northwestern seems to come down to the wire. Last year it was a full court pass, but the Wolverines have also played several overtime games against the Wildcats on the road. The only recent memory of a comfortable Michigan win at Northwestern was Trey Burke’s sophomore year when he led Michigan to a 28-point win.

A change in scenery might help the Wolverines, but it is tough to expect anything less than a close game KenPom gives a narrow edge to Michigan, 63-62, with a 55% chance at the road victory.