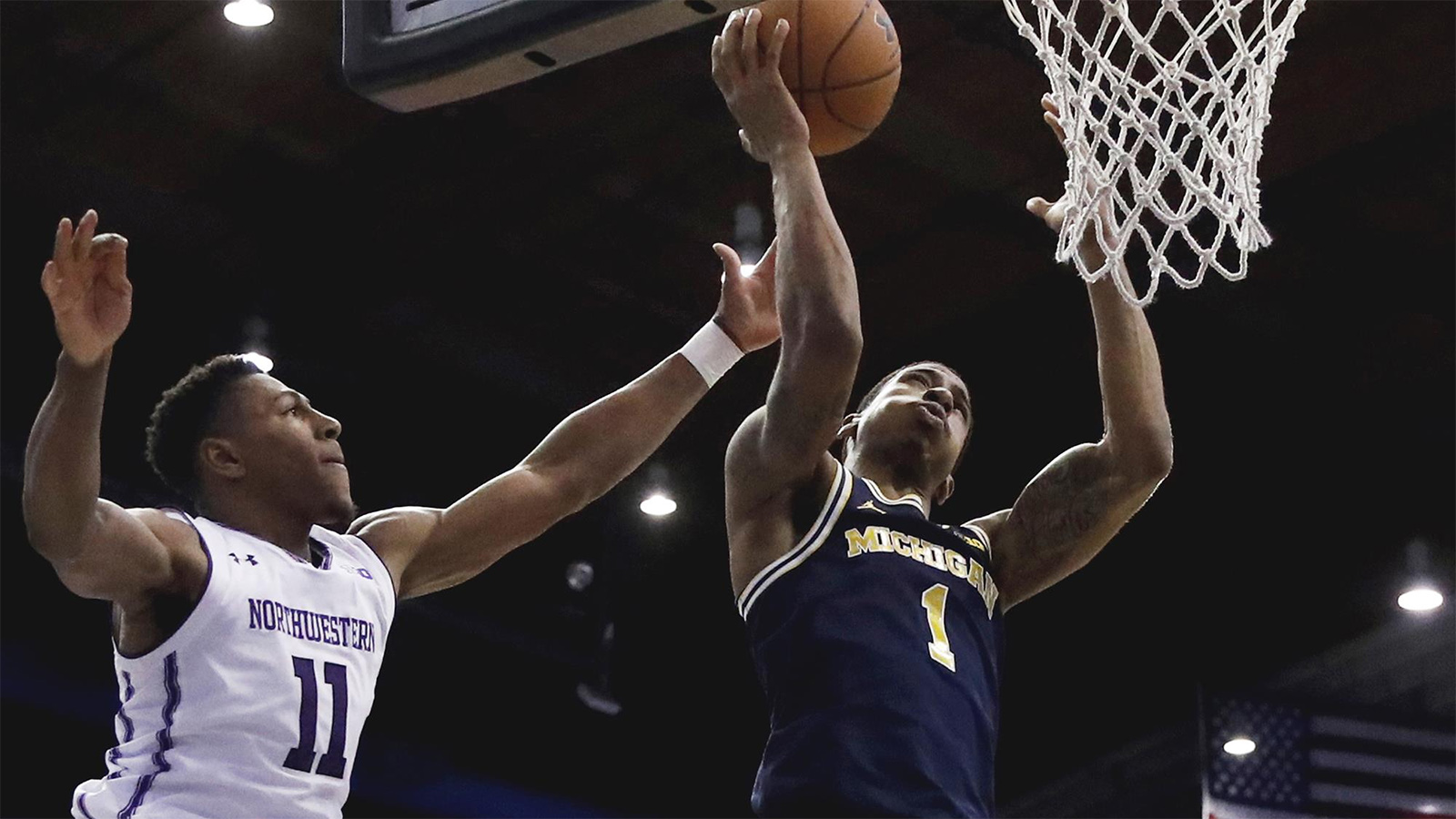 For the second time in a little over a week, Michigan played one good half of offense and one terrible half of offense against Northwestern. That got the job done at home last Monday, but it wasn’t enough in Chicago tonight.

When things have gone south for the Wolverines this season, it has generally been the offense that gives in. Michigan has scored 21 points or fewer in five different halves of Big Ten basketball:

The Wolverines have been lucky enough to win two of those games, but it is not a sustainable habit. 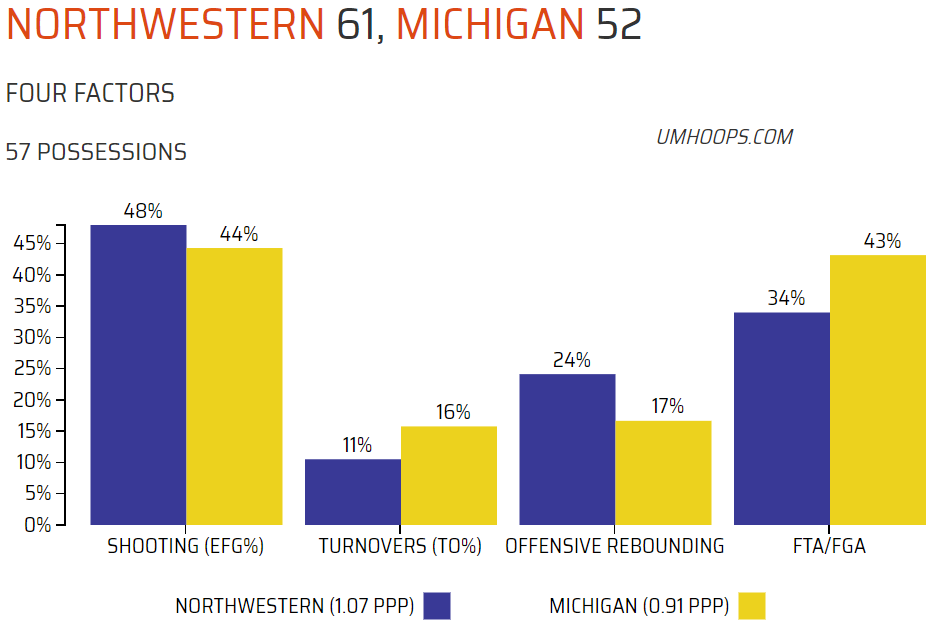 The Wolverines ran some great action against the zone in the first half and created several easy baskets, but it was hard to shake the feeling that they should be ahead by more. A stretch of four turnovers in a handful of possessions let Northwestern back into the game and erased a quick 13-3 Michigan start.

I’m not sure exactly what Northwestern tweaked with its matchup zone in the second half, but they seemed to be trapping more heavily inside and sagging off of Zavier Simpson a bit more. Simpson had five first half assists and the Wolverines were doing a great job finding cutters, in the second half he didn’t record an assist. Michigan could never adjust and the offense seemed to just spin its wheels through most of the second half.

Northwestern’s zone also slowed the game to a crawl — just 59 possessions — and the token pressure consistently forced the Wolverines to get into their offense late and constantly attempt to run shot clock offense. At this point, Michigan just doesn’t have that guy who can go and get you a bucket in those situations. The Wolverines are just 4-9 in 63 possession or slower games this year and six of their seven games below a point per possession are in that subset.

Northwestern turned the ball over on 27% of its possessions last week, but just 10.5% of its possessions in this game. That was critical not just for the Wildcats’ offense, but also for taking easy opportunities away from Michigan. When Michigan can’t create easy transition offense, it can’t score consistently.

The Wolverine defense had some great moments against the ball screen in the first meeting, but Bryant McIntosh got comfortable in the second half of this one and started picking things apart. The senior guard finished with 24 points on 8-of-11 shooting with 5 assists. Northwestern’s ball screen game was breaking Michigan’s defense open and the Wolverines were constantly recovering late to shooters and giving up dribble penetration.

Northwestern took (46% of shot attempts) and made (8) more 3-pointers than Michigan generally gives up in any given game. This was only the fifth game that the Wolverines have allowed 8 made 3-pointers or more all season.

There are very real problems for Michigan to address coming out of this loss, but some of the reactions will inevitably be over the top. Michigan lost a road game against .500 Big Ten team that is only about 3 points per 100 possessions worse in efficiency margin in league play. Northwestern has now won 4 of its last 5 games and is playing its best basketball of the year. These two teams played four halves and split the difference, both home teams pulled away late in both meetings.

But the Wolverines do need to win some games down the stretch and the next two games — at Wisconsin and home against Iowa — are now all the more important. 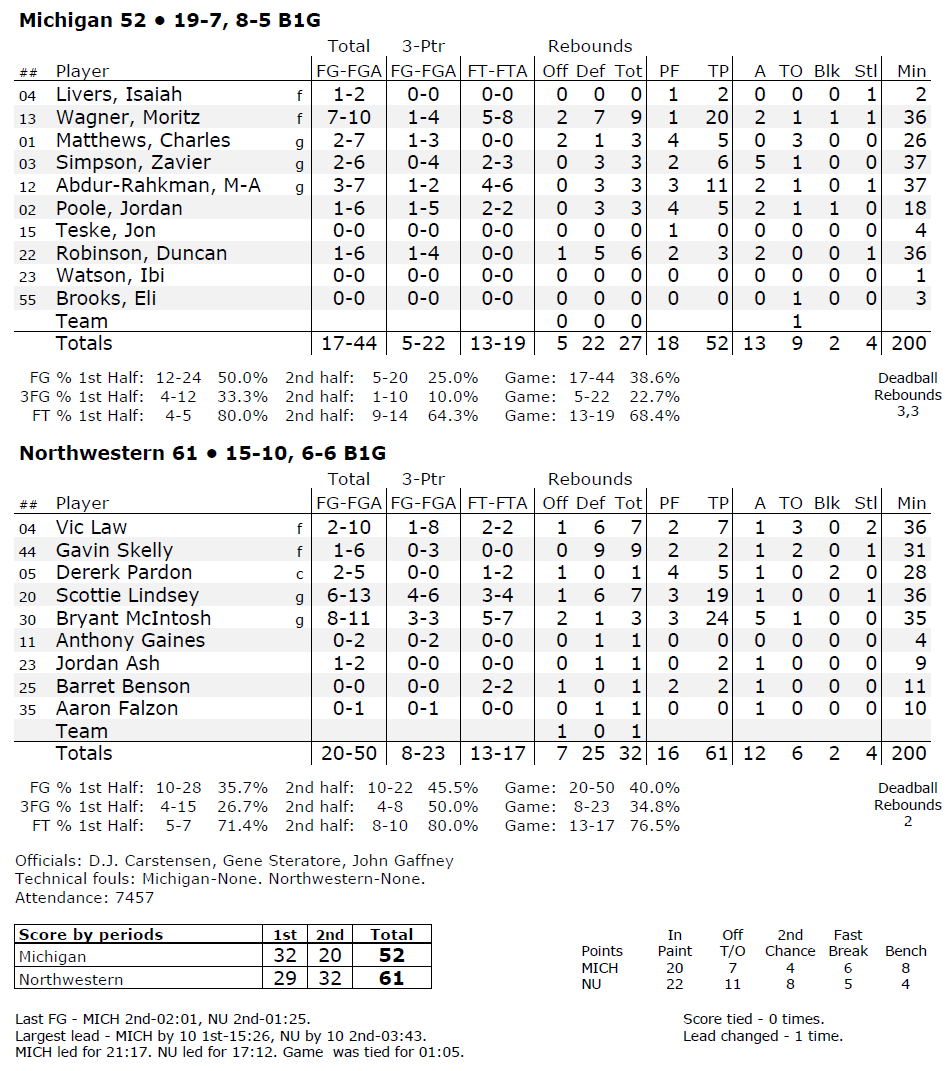