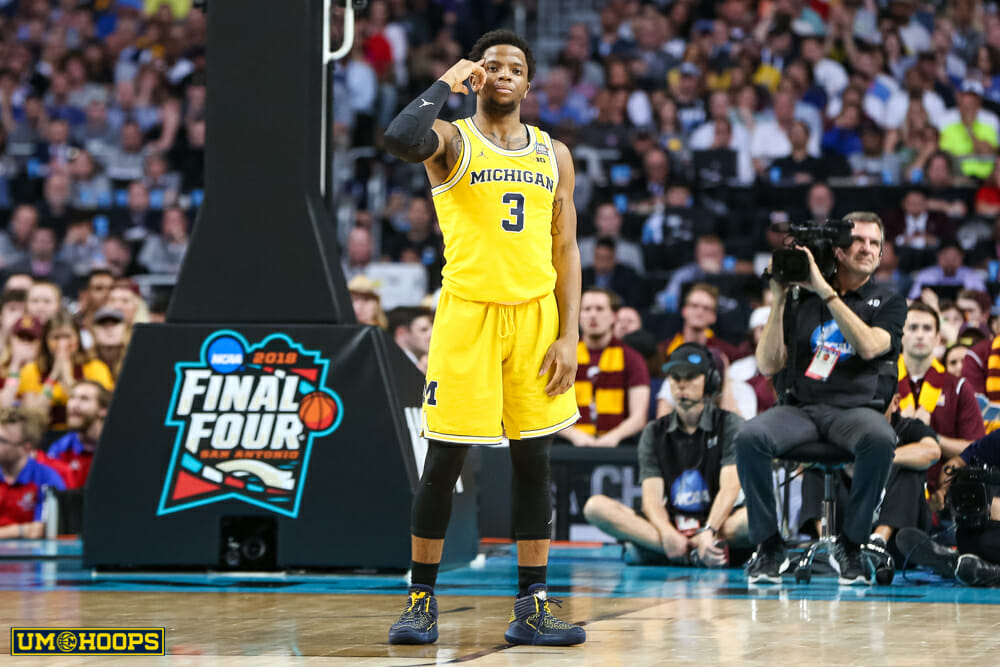 Outside of their Sweet 16 smackdown of Texas A&M, the Wolverines have broken a point per possession just once in the tournament. That was Saturday night against Loyola, a game where Moritz Wagner and Charles Matthews dragged the Wolverines across the starting line, then a little further before the rest of the team caught up.

As good as its defense has been throughout — and it has been good enough to get them to the national championship game — the fact remains that Michigan has played just one complete, all-around game so far.

But both premises start from the same idea: the Wolverines can’t play the same way on Monday and expect to win. Not against Villanova — the best team in the country according to KenPom, along with anybody else who has watched basketball in the past five months.

“It’s the national championship game,” Isaiah Livers said. “There’s no room for error. We can’t have the turnovers we did yesterday, it’s unacceptable. We can’t always have our defense bail us out.”

On Saturday, the offense was ugly for the game’s first 30 minutes. Zavier Simpson struggled all night on offense, recording more turnovers than made baskets or assists. Combined.

Muhammad-Ali Abdur-Rahkman hit two shots all night and finished his second straight game with single-digit scoring. Duncan Robinson didn’t score in the first half. Michigan turned it over 11 times in the game, eight of them before the break.

Michigan’s defense kept the door open. But a better team might have slammed it shut, and Villanova is that team.

“Villanova is just another form of Loyola,” Beilein said, “and probably a little taller, a few shot blockers inside and just probably better in some respects.”

The Ramblers play offense the right way, but couldn’t quite execute against a defense as good as Michigan’s. The Wildcats won’t have trouble with that — their offense is the best in the country, drawing a comparison to the Golden State Warriors from Beilein.

During Sunday’s media session, Villanova point guard and newly-crowned National Player of the Year Jalen Brunson was asked how he’d guard himself.

“Just hope I miss,” he responded.

Zavier Simpson will have to do more than hope. He’s as much a reason as anybody that Michigan is a team that can win on the defensive end, and despite an anomaly of an offensive game Saturday, it’s fair to say March was the best month of basketball he has ever played. But Brunson is a different kind of matchup, just like the Wildcats are a different kind of team.

Beilein voted Brunson for Player of the Year. Assistant coach Luke Yaklich took his son to watch Brunson play in high school. Michigan hasn’t seen anything like him, and it has all of a day to come up with an answer.

Brunson will back down Simpson in the post, unlike any point guard this side of Andre Miller and Mark Jackson. He’ll make Michigan consider sending help to a perimeter player, something it hasn’t done all year.

“We’re gonna be stewing over, over coffee in the table in a hotel ballroom and scratching our heads trying to figure out how to stop Jalen Brunson on the post, on the wing, at the top,” assistant coach Luke Yaklich said. “He’s just — he’s really, really good.”

Simpson, true to his character, looks forward to it — “Who wouldn’t?” he asked — but this is his toughest matchup all year. Beilein saw Kansas send doubles at Brunson on Saturday, then watched as Eric Paschall, Mikal Bridges and the rest of the Wildcats shot a combined 45 percent from 3-point range, romping to 95 points.

At this point — after an entire month of short turnarounds — Michigan has its preparation for Monday down to a T.

The coaches — led by Saddi Washington, who had the scout — delivered an introduction on Villanova to the players this morning, before heading to the arena. The Wolverines will hold a light practice, walking through the Wildcats’ offensive actions with the scout team, then a more intensive film session on Sunday night. They haven’t held a shootaround on the day of the game throughout the tournament — and that isn’t about to change now.

On Monday though, Michigan can’t wait 30 minutes to kick its offense into gear. Moritz Wagner can’t get into foul trouble — neither can anybody else. The defense has to be as pristine as it has ever been. Anything less than the Wolverines’ best game isn’t going to cut it.

“We have to come ready to play,” Simpson said, “or we’ll get embarrassed.”