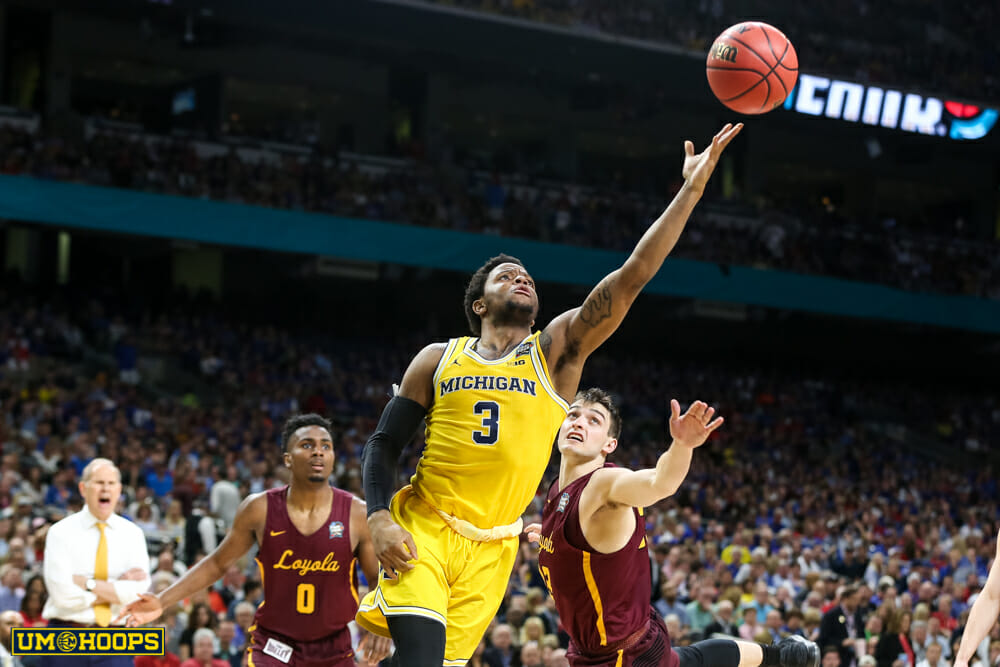 For the third year in a row, we solicited Michigan basketball over/under propositions to preview the upcoming season.

There were some great submissions and just like last year we have opened up each prop for readers to vote. Each posted over/under proposition has an attached poll so you can vote with your opinion. We’ll follow up at the end of the season to see how we did (here are last year’s results).

Basketball season is around the corner. For a limited time only, join the UM Hoops community and get access to exclusive Michigan basketball content for less than $3 per month.

We had three submissions for this prop (11.5, 12.5 and 14), but most computer metrics peg Michigan around 11 or 12 conference wins. We’ll go with the original line of 12.5 and I’ll take the OVER. I think this one is close, but there are no games on the schedule that feel like insurmountable. Bart Torvik’s site puts Michigan at worse than a 4 point underdog in just one Big Ten game, at Michigan State. A conference loaded with good, not great, teams probably means a few frustrating surprise road losses along the way, but I think Michigan’s defense is good enough to carry it through the conference slate.

There will be bumps along the way and there are plenty of very good teams in the league, but I think the Wolverines claw their way to 13 or 14 league wins in a 20-game schedule.

Give me the OVER. Poole will see an increased workload which could lead to decreased efficiency, but I like him to top this number. Poole’s offensive rating as a freshman was 108.0, but it was 117.2 in Big Ten games (and 126.2 in games against top-50 competition). I have plenty of questions about Poole’s defense and his ability to transition to being a 30 minute per game player, but I have little doubt that he’ll find ways to help Michigan’s offense while he’s on the floor.

Even if Poole made some frustrating decisions as a freshman, he still had a low turnover rate (12.9%) and made 52% of his twos, 36% of his threes and 82% of his free throws. That’s the profile of an efficient offensive scorer and one of the biggest reasons to be optimistic about Michigan’s offense having a rebound year in 2018-19.

I’m not nearly as optimistic about Ignas Brazdeikis’ offensive efficiency numbers, but I have no reason to question his ability to get shots up in a hurry. Brazdeikis attempted 22 shots per game last year at Orangeville Prep and 16.3 per game in Nike EYBL play. He’ll get his shot attempts and he’ll be a productive scorer for an offense that needs additional options. Give me the OVER.

The most surprising thing to me here was looking back at last year’s stats and realizing that this went under last year. Last October, I predicted that this prop would go over except the line was 2.5, not 0.5.

Michigan loses Moritz Wagner (39.2%), Duncan Robinson (38.1%), and Muhammad-Ali Abdur-Rahkman (36.6%) and returns a team where the best 3-point shooter was Jordan Poole at 36.6%. Poole is the best candidate to get to the 40% threshold, but he’s going to have to shoot a lot of threes as a sophomore. It is tough to become a more efficient shooter with a significant uptick in volume. I’d go with the upper 30s for Poole and take the UNDER here.

This was originally submitted as an over/under of 0.5, but I bumped it to 1.5 to make things more fun. I would be shocked if Charles Matthews isn’t drafted next June, although he might have to wait until the second round. The bigger question is whether Michigan loses two players to the NBA and I can’t see that after this year. I’ll go with 1 and take the UNDER.

Give me the UNDER even though I wouldn’t be surprised if the Canadian freshman ends up as one of Michigan’s top three scorers. For now, I like the idea of him coming off the bench. He’s currently learning the two and the four positions which means that Michigan can bring him in as a reserve for Jordan Poole, Charles Matthews or Isaiah Livers. Brazdeikis could end up playing more minutes than Livers, or even Poole, despite coming off the bench if he performs well.

The easiest path to the starting lineup would probably be at the four position in place of Isaiah Livers, but Livers doesn’t provide the same sort of offensive spark off the bench. With Brazdeikis as the sixth man, you have an easy option if the whole offense struggles (replace Livers and have three offensive threats) or if one of Poole or Matthews struggles early in a game. Remember, Michigan achieved something similar by bringing Duncan Robinson off the bench for the last three months of 2017-18.

There’s a chance that Brazdeikis is simply too good and has to start, but I’d at least expect Michigan to try him off the bench early. Even if he doesn’t start, I’d expect Brazdeikis to be closing games by the time Big Ten play rolls around.

A little under one 3-point attempt per game for Teske this year feels right. We haven’t seen a lot of Michigan this offseason, but in limited bursts we’ve seen Teske attempt 3-pointers in practice and in Spain. One or two 3-point attempts per contest will do just enough to keep opposing defenses honest at the five spot. I’ll take the OVER, barely.

While I can get behind 30 makes for Teske, I’m not sure that Michigan can get to 20 makes out of the center position at the five spot. I’ll go UNDER.

Give me the UNDER. I don’t think Michigan wins the Big Ten outright (I like Indiana) and the smart money is on Michigan not three-peating in the Big Ten Tournament. Taking the field in the NCAA Tournament always seems like a safe bet as well.

Give me the OVER. If you missed it over the weekend, class of 2020 guard Zeb Jackson will announce his decision on Tuesday.

I’ll take the UNDER on both, but the minutes will be very close. Even if Livers comes close to 25 minutes per game, he’d only average around 6.5 points per game if you extrapolated his per-minute numbers from last year’s conference season. Livers’ role on this team might be one of the hardest to peg ahead of the season. Last year, he played almost entirely off of residual action at the four position. Now he has to battle for minutes against Brazdeikis, who is a more skilled offensive player but has less experience and defensive ability.

Simpson made 24 3-pointers in 40 games last year. Michigan probably isn’t going to play 40 games this year and I can’t see him increasing his 3-point accuracy or volume enough to flirt with 45 made 3-pointers. This is a straightforward UNDER.

I’ll take the UNDER because of last year’s roller coaster ride at the line. Simpson shot 51.6% overall and 47.2% in Big Ten games. After what we saw last year, I’d say 60% is probably the goal at the free throw line and then build from there. What’s bizarre about this situation is that Simpson shot 71% as a freshman and was 77 of 104 (74%) in high school and EYBL games broken down by Krossover.

This might be bold, but give me the OVER here. Matthews didn’t shoot the ball well from 3-point range last year and doesn’t have the consistent free throw numbers to portend great shooting, but we’re just talking about a handful of extra makes over a sample size around 100 attempts.

I’ll take the UNDER. Matthews shot 55% on 151 attempts last year and 41% on 34 attempts at Kentucky. Unlike Simpson, Matthews wasn’t a great free throw shooter at the prep levels either. He shot just 60% on a 338 shot sample.

Over under: freshmen that average >16 minutes a game: 1.5

I think Ignas Brazdeikis should be a lock to snap the drought of Michigan players to average 20 minutes per game in their first year. The last two players to accomplish that feat were Derrick Walton (2014, 26.7 minutes) and Aubrey Dawkins (2015, 20.7 minutes). That means the question is whether there’s another incoming freshman on the Michigan roster who could be in line for rotation minutes.

Almost half of Michigan’s roster is made up of freshmen, so you would expect more than one to play major minutes. On the other hand, if you lock in Matthews, Simpson, Poole, Livers, Teske, Brazdeikis and Davis, you might not need much else to fill out the rotation.

If this prop goes over, it will be because Brandon Johns cracks 16 minutes per game, but I have a hard time seeing that given that Livers and Brazdeikis are already ahead of him on the depth chart at the four position. I’ll take the UNDER.

This is a slight OVER for me. Jon Teske averaged 12.3 minutes per game last year as Michigan’s backup center. He did get a few spot starts with Moritz Wagner injured, but he also probably won’t get as many regular minutes as Wagner played last year. Michigan will experiment with small ball looks and Colin Castleton could come on late, but I’d expect Davis to top 12 minutes per contest.

The trial is largely wrapped up and no league coaches have been directly implicated, so I’ll take the UNDER.

This is an UNDER. Johns is still catching up to the game and I see him playing center as more of an experimental look when the situation calls on it. I still expect Jon Teske and Austin Davis to soak up the majority of the minutes at the five.

I’ll go with the UNDER. Michigan only has two neutral court games in non-conference play, so to push this over they’d have to win both and then four games in the postseason. Even with a weaker non-conference exempt tournament, this feels like an under because I can’t see Michigan making a deep run in the Big Ten Tournament for the third consecutive year.

That’s 14.5 points per game per person. I think all three players are capable of reaching that mark, but I also don’t see anyone surpassing it by a wide margin. Overall, this feels like a pretty accurate number, I’ll take the UNDER by a hair.

This is an easy OVER. Teske blocked 26 shots in 506 minutes and should play at least 50% more minutes this year in a regular role. I’d set this over/under closer to 50 blocks.

Probably the most important question on the board. Michigan finished last year ranked 35th in adjusted offensive efficiency and loses its most efficient offensive players from last year’s team. On the flip side, John Beilein has only had three offenses that failed to crack the top-40 at Michigan and all three teams missed the NCAA Tournament. I’m not sure how exactly, I think this team figures out how to have an offense ranked somewhere between 25th and 40th nationally. Give me the UNDER.

Over/under 5.5 – the team’s national ranking for AdjD in kenpom’s ratings.

Michigan will have a top-15 defense this year, but I’ll wait and see on locking in a top-5 finish.

Give me the UNDER, meaning better than 20 as I explained above.

O/U 1.5 message board posts about the season being over or Michigan being an NIT team before January 1st?

Easiest OVER of them all. This will be an over by the end of November if not the first game of the season.