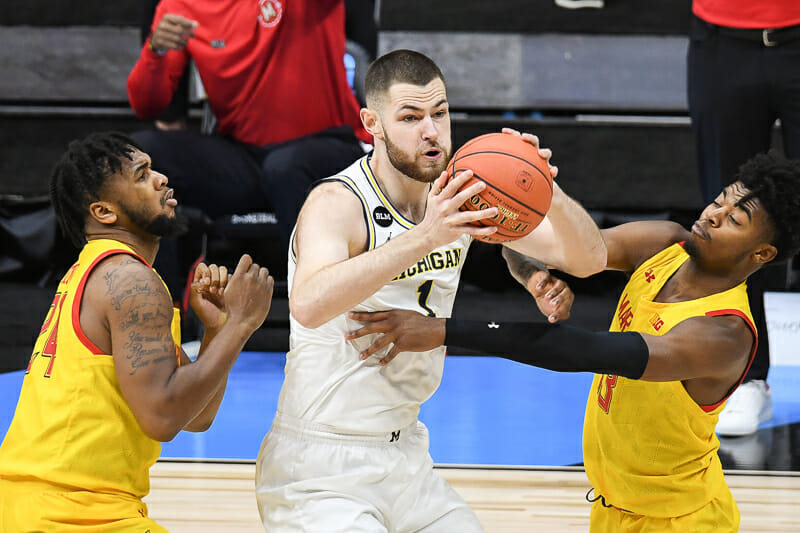 Ivey is the key for Purdue to make the leap from a top 25 team to the top 10 team that most national pundits are projecting. His freshman year was a slow build and he didn’t start a game until late January, but the talent is obvious.

If it wasn’t clear watching last year, it was at the FIBA U19 World Cup this summer. Ivey’s explosiveness jumped off the screen and he averaged 12.3 points, 3 rebounds and 2.1 assists per game for a loaded Team USA squad that captured gold. Ivey was named to the FIBA U19 World Cup all-star team for his efforts.

Similar to Curbelo, his 3-point shot could be the thing that holds back any sophomore year explosion. Ivey shot 26 percent from 3-point range last year and just 22 percent in Big Ten games. It’s easier to buy into his shot given his volume (7 attempts per 40 minutes) compared to Curbelo (1.9 attempts per 40).

There’s some work to do to figure out his ideal fit in Matt Painter’s offense in combination with the two bigs in the frontcourt. The areas where Ivey excelled this summer — in transition and out of ball screens — aren’t always synonymous with Purdue’s post-up heavy halfcourt system but Ivey has the talent to emerge as the best perimeter player in the Big Ten.

The prevailing thought entering last season was it would be the last for Jackson-Davis in Bloomington. After a highly productive freshman season that saw him average 13.5 points and 8.4 rebounds in 29.3 minutes per game, the lefty from Center Grove took his game to an even higher level as a sophomore.

For an Indiana team that didn’t have much to get excited about in terms of wins and losses, Jackson-Davis was a bright spot of consistency throughout the abbreviated 2020-21 campaign. He averaged 19.1 points, nine rebounds, 1.4 blocks and 1.4 assists in 34.3 minutes per game. In conference play, he ranked sixth in the league in offensive rebounding percentage, eighth in defensive rebounding percentage, 11th in block percentage and third in free throw rate.

While Jackson-Davis thrived at drawing fouls, converting from the stripe was often a problem. He attempted 229 free throws last season, but made just 65.5 percent. His 2-point field goal percentage also dipped from 56.6 percent as a freshman to 51.7 percent last season.

Keeping Jackson-Davis in the fold was a major win for new Indiana coach Mike Woodson, who can build his team around a frontcourt centerpiece capable of a double-double every night. Jackson-Davis enters the season as one of the nation’s most productive bigs and squarely on the NBA radar, where he’s projected as a potential second round pick next June by Jonathan Givony of ESPN.com. He’ll need to show he can finish with his right hand and also step outside of the paint and make the occasional jump shot to solidify himself as an NBA prospect.

Liddell considered a jump to the NBA after a highly productive sophomore season, but returned to Columbus as one of the nation’s most well-rounded frontcourt players.

As a sophomore, he averaged 16.2 points, 6.7 rebounds, 1.8 assists and 1.1 blocks in 29.4 minutes per game. His efficiency, particularly in Big Ten play, stands out for a player who had the eighth-highest usage rate in the conference.

Against Big Ten foes, Liddell made 52.2 percent of his 2s, 39.2 percent of his 3s and shot 72.3 percent from the free throw line. He had the fifth best free throw rate (FTA/FGA) in the conference and had an offensive rating of 117.2 in league play, which was 17th best in the conference. His ability to step out and knock in perimeter shots makes him one of the league’s most difficult covers coupled with his midrange game and ability to finish plays at the rim.

Defensively, Liddell was ninth in the league in block percentage and 10th in defensive rebounding percentage. Despite his limited size, Liddell showed himself more than capable of holding his own against some of the Big Ten’s best frontcourt players and also has the athleticism to guard out on the perimeter.

While Liddell may never develop into a bonafide NBA prospect, he’s a highly efficient four-man who should once again have the Buckeyes in the mix in the Big Ten race this winter.

Dickinson returns to Michigan after a flirtation with the NBA draft and will have a chance to build on his Big Ten freshman of the year campaign last season. He averaged 14.1 points and 7.4 rebounds per game last season and his ability to control the paint against every big man in the league other than Kofi Cockburn is the primary reason that there’s a banner going up in the Crisler Center.

Dickinson isn’t an elite leaper but his size was also a key part of the Wolverines’ excellent defense. Michigan finished the year fourth nationally in adjusted defensive efficiency with a 2-point defense that allowed 42.6 percent shooting inside the arc. With Dickisnon back in the middle, Michigan’s defense should be elite once again.

Some of Dickinson’s statistical production waned as the season wore on and teams adjusted to his tendencies. He almost always goes to his left hand when he works out of the post and he’ll need to prove that he’s added a counter move to his arsenal this offseason.

Beyond a right-handed move on the block, Dickinson also has some untapped upside. He was able to knock down the 3-point shot during his high school career at DeMatha and he’s also known as a far better passer than he showed last season. With an offseason to build on his game, those are two areas where the 7-foot-1 big man could expand his skill set and push for Big Ten player of the year honors as a sophomore.

After originally declaring for the NBA draft, Cockburn entered the transfer portal last summer before ultimately deciding to return to Champaign for his junior season. That move to return was a bit of a surprise to some after Illinois assistant coach Orlando Antigua, who recruited Cockburn out of high school, left the program for a similar post at Kentucky.

Cockburn’s decision to return and play a third season for Brad Underwood is a game changer for the Illini. At 7-foot and 285 pounds, Cockburn is a physical specimen that many Big Ten teams simply cannot handle.

Last season, he averaged 17.7 points, 9.5 rebounds and 1.3 blocks for an Illinois team that won 24 games and earned a No. 1 seed in the NCAA tournament. He was second in the Big Ten in offensive rebounding percentage, fourth in defensive rebounding percentage and made 66.4 percent of his 2s in Big Ten play, which led the league. The improvement in finishing showed just how much of a leap Cockburn made from his first season, when he made only 49.1 percent of his 2s in league play.

The departure of Ayo Dosunmu to the NBA puts the spotlight squarely on Cockburn to be the go-to guy for the Illini in his third season. Cockburn will be surrounded by a pair of excellent guards in Andre Curbelo and Trent Frazier, but the ceiling for Illinois may ultimately rest on just how dominant he can become in the post. Given the improvement he showed from his first season to his second and only tepid interest so far from the NBA, Cockburn will be highly motivated to show he’s the Big Ten’s best and most dominant player.