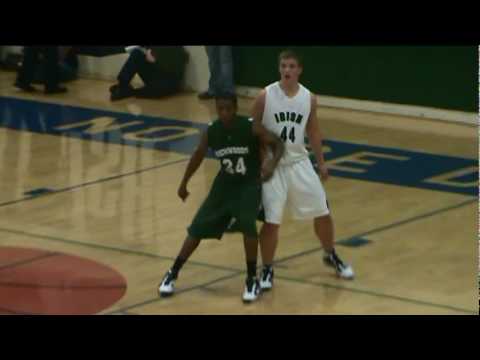 Max Bielfeldt verbally committed to the University of Michigan today during a press conference at his high school. Bielfeldt made two visits to Ann Arbor, most recently an official visit last week. He is the third commitment in Michigan’s class of 2011 and will join guards Carlton Brundidge and Trey Burke.

Bielfeldt is not ranked by Rivals and Scout and is rated 87/100 on ESPN. Bielfeldt received a handful of mid-major offers but his decision ultimately boiled down to choosing between his two Big Ten scholarship offers: Michigan and Illinois. Bielfeldt’s family has strong connections to Illinois, the athletic department administration building is named after his family, but he settled on Michigan.

Bielfledt was not considered a high major prospect before his senior season due to concerns over his size and potential. He put together a remarkable senior campaign, averaging 23 points, 11 rebounds and five blocks per game, and opened the eyes of many schools looking for a post prospect late in the year. Bielfeldt was named the Illinois Class 3A All-State first team and led Peoria Notre Dame to a 28-1 final record.

Bielfeldt put up big numbers all season but the most impressive aspect of his season was that he excelled against numerous highly rated prospects.

He scored 39 points and grabbed 15 rebounds in an 82-70 loss against Gary Lew Wallace and McDonalds All American Branden Dawson:

Bielfeldt, a 6’7″ post who is having a monster junior season, gave Lew Wallace all they could handle inside as he connected on 15-19 shots from the floor. Bielfeldt scored, got fouled, or both every time he touched the ball inside.

Bielfeldt, a 6’8 center, put in a great deal of work in the fall, and is now reaping the benefits. Bielfeldt dropped 15 pounds from his frame, and while remaining strong and physical inside, now has improved mobility. Bielfeldt, who typically does most of his damage in the paint, got to the free throw line 19 times against Champaign Central. Bielfeldt’s 39-point game set a new tournament record, and he also set the career rebounding record for the event with 76.

He also had 26 points and 13 rebounds versus Illinois commitment Nnanna Egwu in a 48-46 win over St. Ignatious.

Bielfeldt is a thick, wide-bodied post who also has the ability to face up and consistently knock down shots out to 3-point land.  He was most solid on the traveling team circuit during July while playing for the SYF Players.  There is no question that Bielfeldt is more than capable of providing an immediate impact at any of the schools recruiting him.

ESPN has a complete scouting report:

Strengths: This strong high energy power forward never takes a possession off. Bielfeldt runs the floor on a consistent basis and simply out works opposing post for easy baskets. In the low post he scores with good touch and crafty moves. Bielfeldt is a below the rim finisher that can also face and knock down mid range and open three with needed time and space. He can drive from the high post as well. Bielfeldt is a good passer and active rebounder on both ends. He could be affective in both pick and pop or role situations. Bielfeldt won’t wow you with athletic ability but will with his consistent production.

Weaknesses: Bielfeldt must work on attempting to improve his explosiveness he is an average athlete at best. And although his is strong he must continue to add strength in order to continue to hold his own in the low post.

Bottom Line: Bielfeldt is a skilled power forward that rebounds on both ends and plays with great energy and urgency on every possession. His is limited athletically but is consistently productive because of his all business approach on the floor where he simply out works opponents with passion for the game.

John Beilein is methodical, cautious and secretive on the recruiting trail. He always watches a recruit in person before extending an offer and generally requires a campus visit before making that offer official. Like it or not, that’s how Beilein recruits. The second twist is that Beilein prefers to keep his recruiting philosophies relatively silent, trusting his talent evaluation over almost everyone else. One thing that’s become clear during Beilein’s tenure in Ann Arbor is that he prefers production over talent.

There’s no questioning Bielfeldt’s production, as he had one of the most impressive statistical seasons in the state of Illinois. The questions surround his height and athleticism. Bielfeldt is listed at 6-foot-8 but those that have watched him extensively tell us that 6-foot-7 is more accurate. Bielfeldt has lost weight but still has a big body that is ready to bang in the Big Ten. He appears to be an undersized five that could play some four down the road.

The one thing that Bielfeldt appears to provide that no one else on the Michigan roster does is low post scoring. He’s not the biggest guy but he’s someone that knows what to do with the ball in his hands on the block. As mentioned, Bielfeldt is the third commitment in Michigan’s 2011 class and fills the last remaining scholarship for the class. You can find a full scholarship breakdown here.