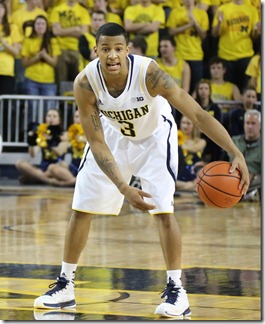 Sooner or later it was bound to happen. Michigan had a bad shooting night. Entering their third conference game against Nebraska, the Wolverines’ worst individual shooting performance of the season was still better than the national season average. Luckily for Michigan, the dismal shooting effort came against the league’s worst offense.

Michigan couldn’t shoot much worse (although Nebraska managed to) yet still escaped with a 62-47 win in a 57 possession slug fest. Every team has nights like this one in a 30-something game college basketball season and the Wolverines proved that they are capable of winning games without the big numbers, three pointers and highlights. And that assertion should be particularly comforting to any longtime observer of Big Ten basketball who understands that league championships are often times more a measure of fight than shooting acumen.

Michigan has always leaned heavily on its primary scoring options of Burke, Hardaway, Stauskas and Robinson – the quartet accounted for 72.6% of Michigan’s offense entering the game – but tonight the Wolverines were fully dependent. Mitch McGary contributed the only two points (3%) from someone other than the “Big Four” and they came near the games closing moments. Nebraska did a great job of packing the lane to prevent the easy passes around the basket that have led to so many easy baskets this season. The result was a Michigan offense predicated on isolation situations. Just five of Michigan’s 21 made field goals were assisted and the Wolverines shot 48% on two point attempts, well below their season average.

Michigan still managed 1.09 points per possession despite its worst shooting performance of the year. The Wolverines were below average inside with 49% two point shooting and awful from three point range at 18%, totaling a 42% effective field goal percentage. Michigan’s 16 offensive rebounds were a season high but also a total buoyed by its sheer quantity of misses. But the Wolverines grabbed an impressive 41% of their missed shots and turned them into 19 second chance points. Michigan was also able to get to the free throw line often, in large part because it was in the bonus from the 14 minute mark of the second half. However, the Wolverines did leave a few points at the line, connecting on 17-of-26 (65%) of their free throw attempts (eight percent below their season average).

Michigan’s defense was solid but was facing a Nebraska offense that seemed more concerned with milking the clock than actually scoring. Nebraska’s woeful output of .83 points per possession actually topped its first two outings in Big Ten play. The Cornhuskers made just 43% of their twos and 23% of their threes for a 39% effective field goal percentage. Michigan only forced five turnovers in 57 possessions but managed to hold Nebraska to just seven free throws to 56 field goal attempts. Most importantly the Wolverines dominated the defensive glass once again, grabbing 82 percent of Nebraska’s misses.

John Beilein teams of old were oftentimes unable to overcome poor shooting nights because they didn’t do the two things that Michigan did so well in this game: crash the offensive glass and get to the free throw line. The competition wasn’t the toughest but the Wolverines got it done in both categories. Michigan outscored Nebraska 19-2 in second chance points and 17-3 at the free throw line.

It was far from Michigan’s best game and the Wolverines won’t be able to beat better teams in the league when they play like this – even at home. But a win is a win and Michigan just matched its best start in program history at 16-0. Big Ten play turns from surprisingly easy to frighteningly difficult in a flash as Michigan prepares to travel to Ohio State and Minnesota.