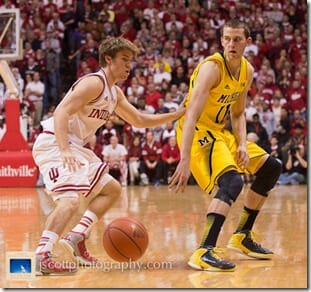 Indiana’s fast start felt inevitable before both teams had even stepped on the floor in Bloomington. The energy in the building was palpable and the crowd was simply waiting to explode. Trey Burke kept the masses at bay momentarily with an early three, giving Michigan its only lead of the game at 3-2, but the onslaught came right on cue. The Hoosiers hit their first six shots, four from long range, and the first body blow was delivered.

Even by Assembly Hall standards, the atmosphere was electric and Indiana’s lead grew to 15 points. Michigan hunkered down and tried to muster the rope-a-dope magic it couldn’t quite pull off in its first loss at Columbus. The Wolverines battled to close the half time deficit to four points, tie the game early in the second half and trailed by just a single possession on three different occasions in the final 12 minutes of play. Michigan could string together impressive sequences but short bursts but could never sustain as Indiana had all the answers down the stretch.

The key statistics to follow before the game were: Michigan turnovers, Indiana offensive rebounds and Indiana free throws. Michigan only passed one of the three tests.

The Wolverines avoided the turnovers but the free throws and two critical late offensive rebounds proved costly. Indiana rebounded 36% of its misses, including two decisive Cody Zeller tip slams down the stretch, and attempted 25 free throws to 50 field goals on the night — to Michigan’s seven.

Despite those defensive woes, the Wolverines managed to hang in the game by forcing turnovers on 24 percent of the Hoosiers’ possessions. At the end of the day this was a bad defensive performance – the worst of the season – for the Wolverines as they surrendered 1.17 points per trip. Indiana has a balanced offense and it showed. First the Hoosiers diced the Wolverines for open threes but down the stretch the lethal combination was Victor Oladipo’s penetration combined with Cody Zeller’s offensive rebounding.

In spite of failing to succeed in three of the four factors, including the most important, the Wolverines were able to hang around simply by valuing the basketball. Michigan coughed it up just eight times in 69 possessions (11%) and outscored Indiana 21-9 in points off of turnovers.

Glenn Robinson III played a career high 40 minutes, Mitch McGary played a career high 28 minutes and  Nik Stauskas went 34 minutes after sitting out practice with the flu on Friday. Caris LeVert and Spike Albrecht, two more freshmen, rounded out Michigan’s rotation and combined to play 14 minutes. That Albrecht-LeVert duo – that was destined for Appalachain State and Ohio University a year ago at this time – actually manned the backcourt for a critical possession midway through the second half that allowed the Wolverines to cut the lead to two points.

The environment at Assembly Hall can accurately be described as something unlike anything these freshmen have ever seen. All five freshmen were shell shocked at one point or another. Some struggled – Robinson and Stauskas were a combined 4-of-16 – and some flourished – LeVert made some nice plays and Mitch McGary had 10 points and seven rebounds – but as a group all five will need to grow from the experience.

Indiana made too many plays down the stretch – namely Cody Zeller’s tip slams and Victor Oladipo’s and-one layup – but the Wolverines need to build off of this loss. There’s no shame in losing at Assembly Hall and Michigan won’t play at a more electric venue this season but there’s no time to sulk. Ohio State heads to Crisler Center in just three days time for a Tuesday night clash on national television.