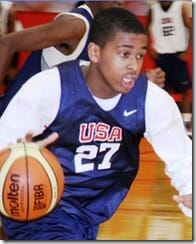 Doyle, missed most of the last two months with a stress fracture injury but has been playing well since his return including a 31 point outing against Dunbar. Doyle is averaging 23 points and seven rebounds in his junior season and Michigan is expected to get a visit after his season.

Michigan and Missouri have long been involved in the Devin Booker sweepstakes. Michigan State jumped in head first this summer and Tom Izzo recently watched Booker at Moss Point. Local SEC schools have also paid plenty of notice to the 5-star junior. Most recently, the ACC has been taking notice as well.

Booker has scheduled a handful of visits later in the next several weeks; North Carolina on February 23rd, Duke on February 24th and Florida on March 2nd.

Most recently Booker scored 35 points in a 54-51 double overtime loss, missing a buzzer beater off back rim as the clock expired. Here’s recent footage of Booker scoring 43 points against Hattiesburg.

While Missouri is one of Michigan’s primary competitors for the Devin Booker’s services, the Wolverines and Tigers could soon be competing for another recruit. 2014 point guard Anton Beard decommitted from Missouri earlier this week and announced an early list that included Arkansas, Georgia Tech, Kansas, LSU, Michigan, Mississippi State, Tennessee and LSU.

Beard, a 6-foot native of Little Rock, Arkansas, is regarded as 4-star top-100 prospect by most services. While Beard is hearing from a host of new schools, he could be a name to keep an eye on in the coming weeks and months as he reopens his recruitment.

Here’s a Rivals.com scouting report of Beard from a tournament this summer:

If Black wasn’t the most dominant player of the day, that title would have to go to his feisty Team Thad running mate Beard. A combo guard who can fill it up from all three levels and excels at scoring off the dribble, Beard is a tough competitor who somehow finds a way to will shots into the basket. He’s slippery off the bounce and even better around the rim as he finds ways to curl around bigger defenders to score and draw the foul. He also is a more-than-reliable shooter from downtown. Beard’s team needed him to score to win games on Sunday, but he also showed the ability to make plays for his teammates as a passer. The four-star sophomore is being recruited by Georgetown, Arkansas, Missouri, Memphis and Alabama.

Both ESPN and Scout recently refreshed their recruiting rankings. While no Michigan commitments were chosen for the Jordan Brand or McDonald’s All-American rosters, all three are consensus top-100 recruits.

Booker (23), Bluiett (49) and Chatman (31) are also ranked favorably in Scout.com’s updated rankings along with Vince Edwards at No. 86.