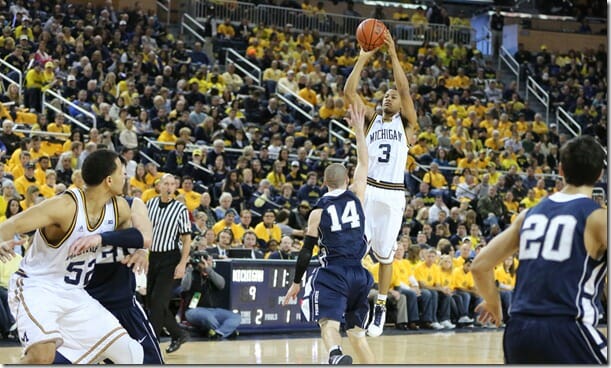 We’ve said it numerous times throughout this season’s Form Tracker: it’s tough to play the point guard position better than Trey Burke has been playing it. The sophomore was the only Wolverine who showed up in East Lansing and put up a valiant, if futile, effort against the Spartans with 18 points on 7-of-11 (3-5 3pt) shooting from the field. Against Penn State at home, Burke was pretty much perfect: 29 points on 16 shots with five assists, two steals and zero turnovers. Burke continues to be a rock for a Michigan team that has been inconsistent its past few times out. These performances were enough to net Burke Big Ten Player of the Week honors although Tom Crean, apparently the only coach in the conference who cares about such things, disagreed on Monday’s Big Ten teleconference.

Nik Stauskas struggled against Michigan State, but the way he struggled made it seem as though he had a better game than most of Michigan’s other players. While the Wolverines as a group seemed listless and shaken on the court, Stauskas was just the opposite. He came out aggressive and didn’t let up despite being effectively defended the whole game. He made some mistakes, but he was one of the few Wolverines other than Burke trying to make plays. Against Penn State on Sunday, the Canuck came out firing and was unsuccessful initially before heating up in the second half to finish with 18 points and four assists while hitting on all of his two-point attempts.

The four games prior to Michigan’s game against Penn State represented the worst stretch of Glenn Robinson III’s young career. Robinson seemed fatigued and at times intimidated by the physical play of teams like Indiana and Michigan State — he was held to single-digit scoring in all but one of those contests (at home against Ohio State, in which he scored 10). If the two game splits worked out slightly differently, Robinson probably could have taken a 1 or a 2 over the Wisconsin and Michigan State games. However, against woeful Penn State and within the friendly confines of the Crisler Center, the freshman returned to early-season form with a 21-point, 10-rebound effort, an accomplishment even more impressive considering he didn’t miss a single field goal attempt.

In a season which has seen Mitch McGary’s progress trend upward with every game, the past two contests — especially against the Spartans — have been a stark reminder of his limitations. McGary looked lost against Michigan State, throwing the ball away four times, matching a career-high in turnovers. He also did not look ready for the physical play in the post, though to be fair the Spartans boast one of the Big Ten’s toughest, most experienced front line combinations. Against Penn State, McGary was better — he made some great passes — but did not record any points.

Tim Hardaway Jr., I’d like to reintroduce you to earth; earth, Hardaway. In a stretch emblematic of Hardaway’s career as a Wolverine, the junior has gone from playing some of the most dominant offensive basketball of any player in the country to playing perhaps his worst basketball of the season to date. Hardaway took 11 shots against Michigan State and made one; he took the same number of shots against Penn State and made three. Michigan will need Hardaway to bounce back if it’s going to turn things around down the stretch.

Originally picked for a spot in the rotation as a defensive stopper, LeVert looked overmatched on that end against Michigan State but played significantly better defense against Penn State. LeVert continues to be relatively ineffective offensively, scoring three points combined in the past two games.

In the two games leading up to Michigan’s showdown with Indiana in Bloomington, Jon Horford combined for 17 points and 11 rebounds. In the five games following, he has eight points and 10 rebounds combined. After appearing ready to step up alongside McGary to fill the shoes of an injured Jordan Morgan, Horford has regressed of late and is still searching for the aggressiveness and confidence he played with directly after returning from his own injury.

The decision to allow Jordan Morgan to play through his ankle sprain has proven to be the wrong one. He is nowhere near his old self and would have likely benefited from shutting down for a time rather than trying to come back as early as Michigan’s game against Indiana. Morgan has been completely ineffective in limited minutes, if not entirely detrimental.

Michigan’s backup point guard gave his best effort against Michigan State in East Lansing, but there was only so much he could do. In spelling Burke, the freshman scored five points in 15 minutes, making his only 3-point attempt on the night, but most of that production came in garbage time late. He played only three minutes against Penn State as Michigan struggled to stay in front of Penn State’s guards.
Max Bielfeldt: 2.5 (Last Week: 4)

You know exactly what you’re going to get with Max Bielfeldt (toughness when battling for position, smart post defense) and what you’re not (much in the way of offense, quickness to the ball on defense). The third of Michigan’s three-headed back-up post attack has been ineffective in 14 combined minutes over the past two games.