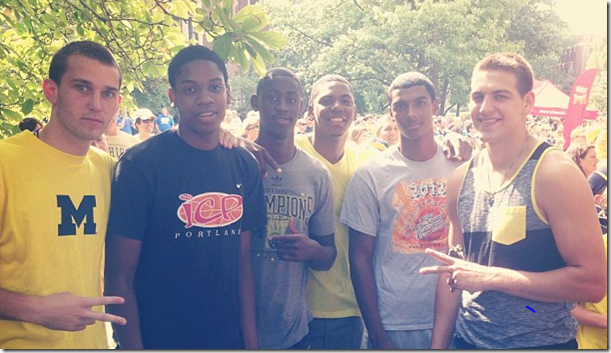 Michigan had a big weekend on the football field with a win over Notre Dame on Saturday but it was an important hoops visit weekend as well.

Kameron Chatman and Donte Grantham both made it into town for their official visits.

Jalen Brunson, Jalen Coleman both made it into town. The class of 2015 guards are two of the three prospects that the Wolverines have offered in the class thus far. Class of 2015 guard Eric Davis also made the trip down from Saginaw.

Although class of 2016 stars Derryck Thornton Jr. and Tyus Battle didn’t make it to Ann Arbor due to scheduling issues but a pair of highly regarded ’16 prospects still amde the trip. Cassius Winston and TJ Leaf, both top-50 players in their class, made the trip to Ann Arbor.

Michigan also welcomed back Trey Burke, Tim Hardaway Jr. and the rest of last year’s team to be honored on the field during the game. After the jump find a rundown of visit reactions, tweets, pictures and notes from the weekend that was. We’ll have more on all of the recruiting action in the hours and days to come.

Chatman’s visit to Ann Arbor went very well. Arizona and Oregon are serious contenders for Chatman’s services but Michigan has made a strong push. The fact that the Chatmans made the trip from the West Coast for their June visit shows that the interest is serious. Chatman and his father tweeted throughout the visit covering everything from on the field, to dinner the night before and car service to the airport.

“Car service just arrived….Kameron taking his parents off to Michigan for his 1st official visit!”

Welcome to the Big House! #GoBlue

“Welcome to the Big House!”

His father also hinted that there could be a change in the original schedule, which was to take all five official visits.

Elite recruit Kameron Chatman enjoyed his visit immensely to Michigan..Oregon up next

Brunson made the trip up from Chicago for the football game and was hosted by Spike Albrecht. He tweeted that he enjoyed the visit and posted a Vine from the field.

Michigan players were on the field celebrating during the game and they were joined by players from last year’s team. Here are some highlights from social media of the reunion.

Jalen Coleman visited Michigan State last weekend and was offered a scholarship last week. TJ Leaf made a recent trip to Indiana before his Michigan visit. Tom Crean offered a scholarship and Leaf said it would be “hard to say no to Indiana”. Devin Booker visited Michigan State officially over the weekend and is already in Kentucky for his next official visit. Michigan has visit No. 3 which is scheduled for October 5th.