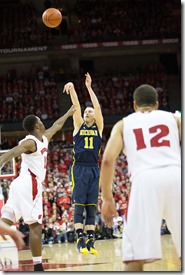 Michigan has won the award in back-to-back seasons after Trey Burke took home the honor last season. Before Burke was honored last season, the last Wolverine to win Big Ten Player of the Year was Glen Rice in 1989.

Stauskas averaged 17 points and 3.5 assists per game in Big Ten games, helping the Wolverines win the Big Ten outright by three games. He was lethally efficient as his shot chart shows here. He was the only unanimous selection on the All-Big Ten First Team by both coaches and media. Stauskas was also named a 2nd team All-American by The Sporting News earlier today.

This is the fourth time a Michigan coach has been voted as the Big Ten Coach of the Year. Johnny Orr received the award in 1974 and 1977 while Bill Frieder won the award in 1985.

Beilein led Michigan, who started the season 6-4 and lost Preseason All-American Mitch McGary to a back injury, to a 15-3 record in conference play. The Wolverines won their first outright title since 1986 despite having the youngest team in the conference.

Glenn Robinson III earned Honorable Mention from both the coaches and media for the second consecutive season.