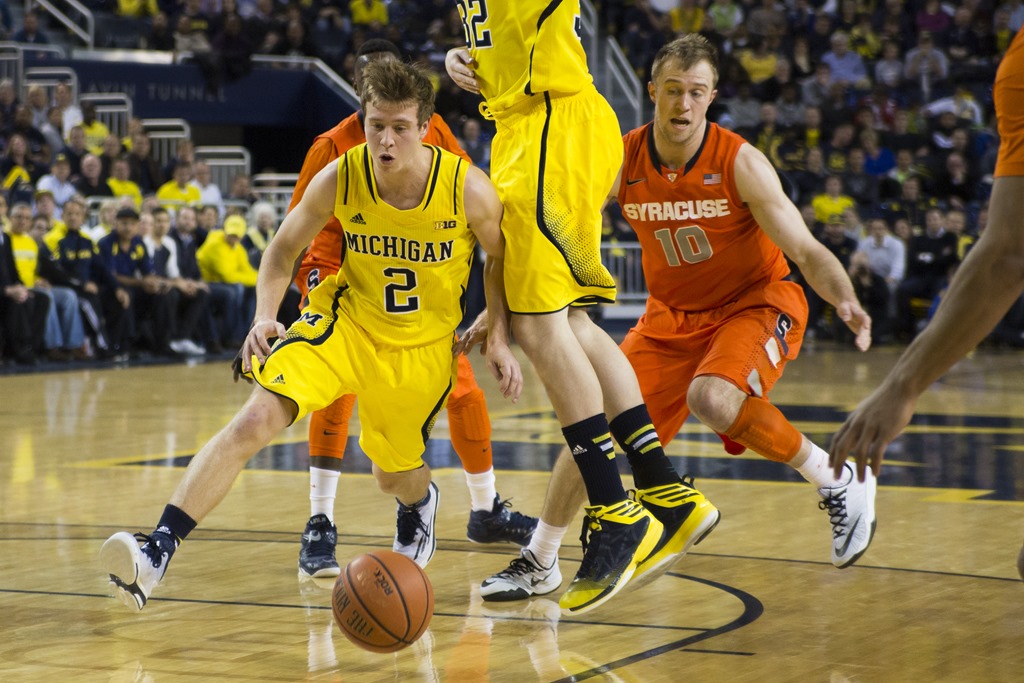 As it turns out, the Michigan basketball team might’ve been just fine without Derrick Walton against Syracuse on Tuesday, because if the guard couldn’t have played, the Wolverines would have simply relied more heavily on Spike Albrecht.

As it turns out, the Michigan basketball team might’ve been just fine without Derrick Walton against Syracuse on Tuesday, because if the guard couldn’t have played, the Wolverines would have simply relied more heavily on Spike Albrecht.

Walton, who is recovering from a sprained toe, was a game-time decision to start and finished with just three points on 1-of-7 shooting.

And as he demonstrated Tuesday, Albrecht can be a lethal offensive weapon on his own.

The junior compiled one of the best performances of his career, tallying 11 points, dishing out nine assists and recording two steals in 27 minutes, all without a turnover of his own, as the Wolverines beat the Orange, 68-65.

“Spike is really good at attacking zones,” said Michigan coach John Beilein. “He sees behind the zone, he makes that entry pass into the high-post area better than anybody. That’s why we had him out there so much.”

Albrecht has played 27-plus minutes in all but one of the Wolverines’ games this year and has a 6.4-t0-1 assist-to-turnover ratio. Yet he showed only limited flashes of his own scoring potential last month, not reaching double-digits in points through the first five games of the season.

He didn’t break out until Saturday against Nicholls State — a game Walton missed — when he scored 10 points and added seven assists and three steals without a turnover. And then, in front of a raucous Crisler Center crowd, he took the spotlight Tuesday by using his prior experience against Syracuse to slice up the Orange.

“You cannot mimic that [2-3 zone] in practice,” Albrecht said. “In the first half, I was shooting, and they were all over me. You can’t mimic that length and that size.”

Beilein has stressed to Albrecht all season that he should shoot when he has open looks, and that he did Tuesday, going 3-for-5 in the second half.

You’ve probably already seen the junior’s biggest highlight of the night, a catch-and-shoot three-pointer from well beyond the arc that rattled home with just more than 30 seconds remaining to give the Wolverines a lead they wouldn’t lose.
“I was a little nervous,” Albrecht said of the shot. “It did the little toilet-bowl action on me, but God was with me on that one.”

The guard also had a clever behind-the-back assist to Ricky Doyle that helped put Michigan ahead early in the second half.

I think that guy was going to block the crap out of me if I went up with it.

“It was kind of just instinctive,” Albrecht said. “I usually don’t do the behind-the-backs and all that, but it was just kind of open.

“I think that guy was going to block the crap out of me if I went up with it.”

Albrecht shined because the way in which he combined his three-point shot (3-for-5) with his ability to singlehandedly dribble through Syracuse’s vaunted 2-3 zone and then find open players — whether it be Ricky Doyle inside or one of the team’s numerous threats from deep. In the second half, Albrecht accounted for nine of Michigan’s 12 field goals.

With Tuesday’s performance, he now has 16 assists and no turnovers in his last two games and is hitting 42.9% of his threes on the season.

As Walton continues to recover — he has yet to participate full-speed in practice since the sprain — the point guard duties will continue to rest heavily on Albrecht.  Even when Walton is healthy, Michigan needs Albrecht to provide major minutes off the bench.

That’s something he’s used to; even last year, he demonstrated he could be trusted as a ballhandler and distributor. But on Tuesday, he showed he’s not afraid to take the big shot, either.

“We had Nik Stauskas, Tim Hardaway and Trey Burke do that, and that was a big shot for him,” Beilein said. “It’s something that we believe he can do. That was my encouragement to him this year: ‘Spike we need you to score. This team cannot score like last year if you are just setting people up. Shoot the ball when you are open. You’re really good at it.’ ”