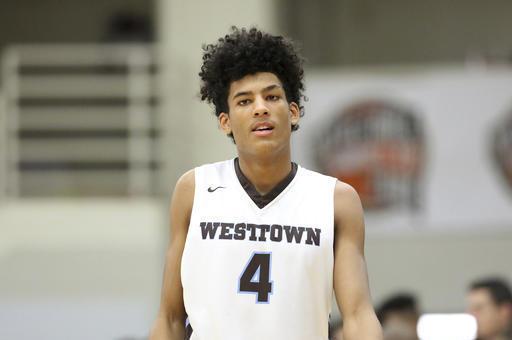 The spring evaluation period gives recruits the opportunity to boost their recruitments with good performances in AAU play. High-major coaches flock to these events in hopes of unearthing the latest gem.

And from the looks of it, Jake Forrester could fit that very profile.

The 6’8 power forward from Pennsylvania says he has received heavy interest from schools in the ACC, Big Ten, Big 12 and Big East since hitting the Nike EYBL circuit.

“This spring has been going really well,” Forrester said. “I’m enjoying the process that I’ve been going through. I think a lot of things have taken off this school year and spring. My recruitment has taken off, my stock has risen since I’ve played for Westtown and taking it over to the PSA Cardinals. I think it’s going really well, we’re 7-1.

Forrester says he’s still weighing his options and that he doesn’t have a leader or any particular teams standing out to him.

Michigan, led by assistant coach Saadi Washington, has been a steady constant in Forrester’s recruitment for nearly a year now. The Wolverines began recruiting Forrester on June 15, 2016 — the first day that rising juniors can be contacted by coaches.

Since then, Forrester has built a relationship with Washington, his primary contact on the Michigan coaching staff, with the two usually talking once or twice a week.

“Just that I’m a player they like, a player that can fit in the system, just to keep academics up, keep doing well in school, stuff like that,” Forrester said of the conversations he’s had with Washington. “It’s all good stuff. I think last time I talked to (Washington) he brought up watching me play in Indianapolis.

“I’m planning on getting on the phone with Coach Beilein soon, so I think that’s going to go well.”

Forrester says he has talked to Michigan about visiting campus and that he’ll “probably make that happen” in either June or early August.

The plan right now is for him to cut his list down to eight or nine schools after the next session before making a commitment sometime in early August. There isn’t an exact date, and Forrester left open the possibility for moving back his commitment — he’s still debating whether he wants to take his official visits during the fall.