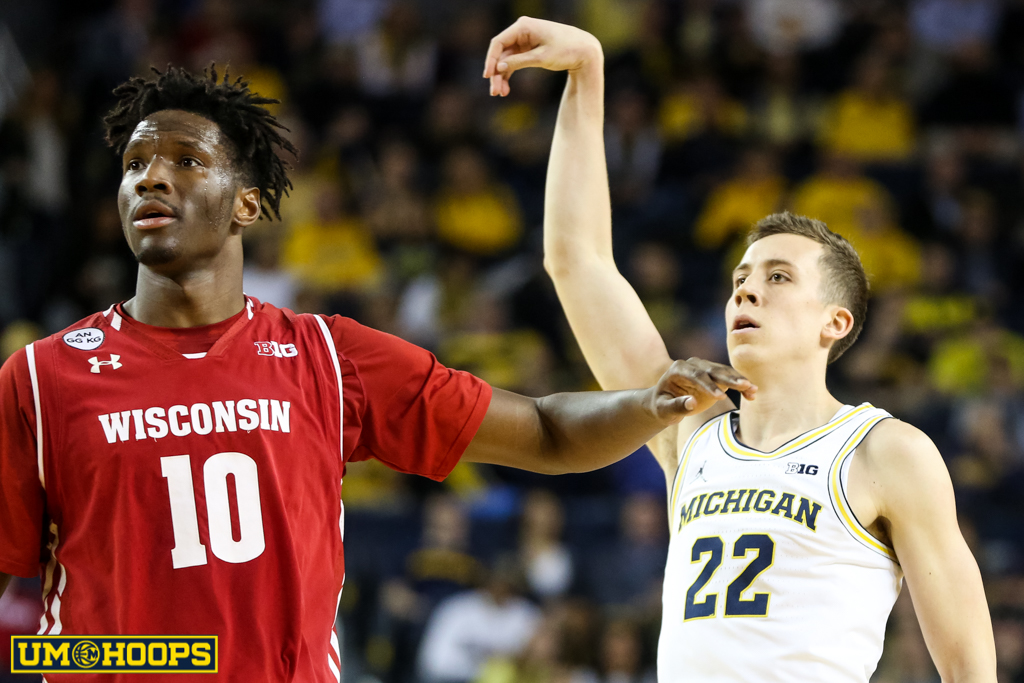 Robinson’s main strength will always be welcome in Ann Arbor. The question remains though: how capable defensively will a frontcourt duo of Robinson and Moritz Wagner be?

As one player emerges, another must sit — that’s simply life in college basketball.

He played fewer minutes. He took fewer shots. After starting 27 games in his first year as a Wolverine, Robinson got the nod just three times last season.

Perhaps the same situation would’ve affected another player more adversely than it did Robinson. But the fifth-year senior dealt with a reduced role relatively well. After all, he’s a gunner, and you can still make big shots coming off the bench.

Now, though, Robinson’s role looks to expand. We know he can shoot — over two years, he’s hit 43.9 percent of his 3s. That’s an important ability for a roster that loses 56 percent of its made 3-pointers from a season ago. The bigger question is whether Robinson can improve in every other aspect of his game.

Robinson is a vastly different player at the ‘4’ than Wilson was. He has neither the height nor the shot-blocking ability that Wilson did. Robinson, in fact, may represent a return to a more typical ‘4’ that John Beilein has employed in his tenure at Michigan: an undersized player with a low usage rate who can stretch the floor — and who also has some defensive deficiencies.

In his first two years, defense has never been what Robinson has been known for. He showed a propensity to take charges last season. But he struggles to stick with quicker matchups on the perimeter, bigger players can bully him around the basket and rebounding isn’t his forte.

That’s not for a lack of trying, of course — Robinson gives a high effort in every facet of the game. The bigger concern for Michigan is how much he can improve on that end heading into his final year of eligibility. There will be a downgrade defensively going from Wilson to Robinson — the only question is how much.

Of course, this is all assuming Robinson holds off freshman Isaiah Livers for the starting spot. But given Robinson’s experience in the offense and his continued improvement moving without the ball, it seems like it’ll be his job to lose, regardless of how impressive the freshman has been up to this point.

“I saw Duncan the next day and was excited for him — it’s a great opportunity for him,” Beilein said on May 26 as he wrapped up last season. “Duncan would back up there probably next year if D.J. was here and play some ‘2’ or ‘3’. …

“Now I’m really comfortable with that (at the forward spot). What we lose in some areas, we could gain in some areas.”

Robinson may be one of the more known quantities on the roster. We know he can, and will, shoot from deep. But how he continues to develop in every area outside of offense will determine just how big of a drop-off Michigan faces in the post-DJ Wilson era.

Quotable: “Duncan understands right now that he just can’t stand in a corner and get open because they aren’t going to leave him open. How do you get open? He needs to watch Kyle Korver over and over and over again. Yeah, he stands in a corner, but at other times, he’s running 100 miles per hour around the court to get open. So he understands that, and he’s driven right now. Duncan is so driven right now, and this just added to it I think.” — John Beilein on May 26, 2017.

Best-case scenario: As the entrenched starter, Robinson continues to be a 40 percent-plus shooter from deep and approaches the 45 percent mark while attempting over 200 3s (up from 151 last year). His rebounding rate improves and any negatives on the defensive end are far outweighed by what his shooting ability brings to the table.

Bottom line: Robinson’s main strength will always be welcome in Ann Arbor. The question remains though: how capable defensively will a frontcourt duo of Robinson and Moritz Wagner be?